Stephen Harper and the Terrorist Trap 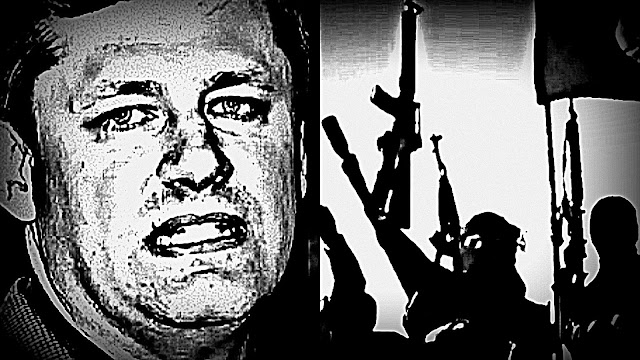 Well just I predicted, Stephen Harper is moving quickly to take political advantage of that skirmish between our special forces in Iraq, and a group of ISIS terrorists.

Using it to puff out his chest or his belly, and sound like a tough guy.

"This is a robust mission, we're there to make those guys effective so they can take on the Islamic State and deal with them," he said in response to a question from CBC News during an appearance in St. Catharines, Ont.

And setting it up as a blunt weapon, or wedge issue, to use against the opposition.

Where he portrays them as cowards and terrorist stooges, while portraying himself as a Great Strong Leader.

Even though we know that he's no hero... 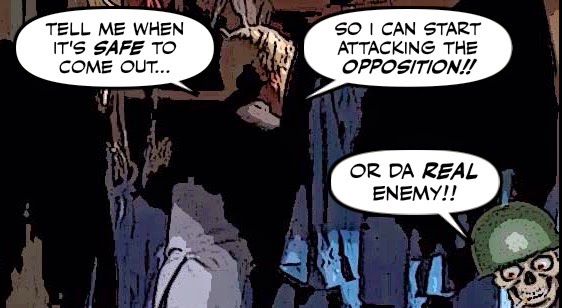 Just a grubby little leader playing cheap election politics with the lives of others. Trying to bait a trap for the opposition.

Even though neither Justin Trudeau nor Tom Mulcair have criticized our soldiers for defending themselves.

What they have done is criticize Harper for misleading Parliament, which whether a serial liar like him likes it or not, is a crime against our democracy.

And in that regard, I also find this disturbing.

Acknowledging the situation on the ground in Iraq has "evolved" since last fall, Chief of Defence Staff Gen. Tom Lawson said the activities of the Canadian special operations team deployed against ISIS are "entirely consistent" with its original mandate from the government.

For when does a general take it upon himself to "evolve" a mission? 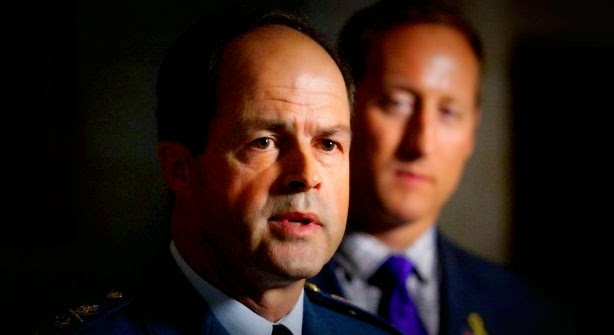 After promising the opposite.

"All coalition troops on the ground in Iraq are being used in the same role — advise and assist, but not accompany, and not engage in direct combat," Lawson said last October. "It's very important that it's Iraqi soldiers who do that."

Who is giving him his orders?

And so soon after the military so eagerly revealed the details of that skirmish with ISIS, even though it NEVER volunteers information about the operations of our special forces... 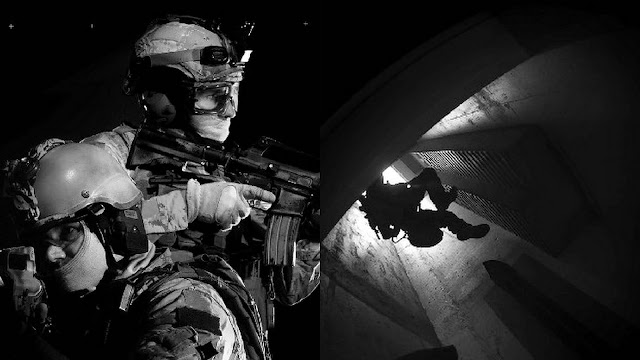 Which only makes it look like this whole offensive is being scripted by the PMO, for crass political purposes.

And that our military, like the police, and the Canada Revenue Agency are being politicized and used to go after Harper's enemies.

But then, as I pointed out the other day, the danger was already obvious.

Now that his fraudulent reputation as a Great Economist Leader is slowly rapidly being demolished, playing a Great Strong Leader is the only role he has left.

He will try to pit his black and white position, against the more nuanced positions of the opposition... 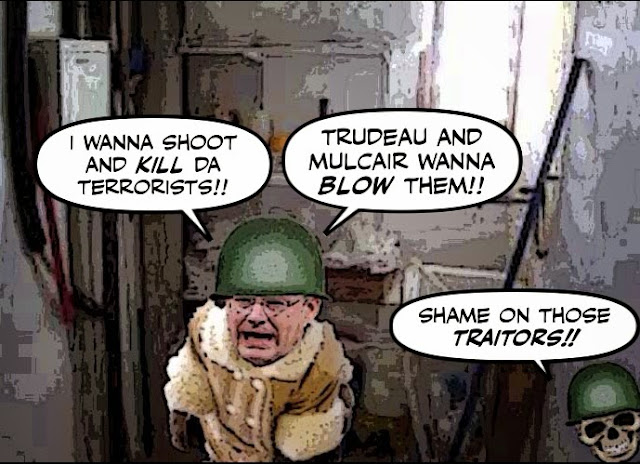 So that should we be attacked by terrorists, or should some Canadian soldier be killed, or captured and beheaded. Or should some new ISIS horror story shock the world.

He can harvest the visceral response, as he did after the Parliament Hill shooting, and use it to propel him to another bloody majority.

Which is why I strongly suggested the other day that the opposition take immediate steps to innoculate themselves against that nightmarish scenario, and prepare to stop him in his tracks.

By among other things questioning whether that six-plane mission to hold back the ISIS hordes is for real or for show? Shouldn't we be doing MORE to defeat them? Or demand to know why he's hiding the cost of that mission.

Or why he's trying to turn us into a police when the security forces have all the laws they need to fight the threat of homegrown terrorism.

Or why he's allowing his precious prisons to be turned into schools for wannabe jihadis. 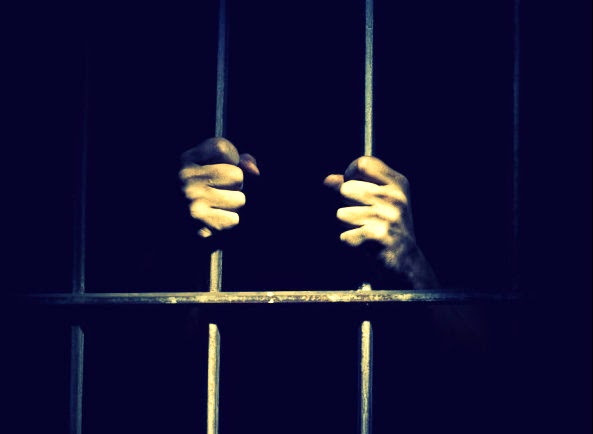 Federal prisons are potential breeding grounds for Islamist radicalization and the government and correctional system are doing little to confront the public safety risk, experts warn.

And why is he shooting off his mouth, trying to provoke the terrorists, while not doing enough to make us SAFER?

Does he WANT them to attack us?

And the answer is of course he does, nothing could suit his purposes better.

And if the opposition doesn't neutralize that strategy, and should something awful happen in the run-up to the election, they could end up regretting that FOREVER.

And we could end up losing our country.

Because he is the political terrorist who could REALLY destroy Canada... 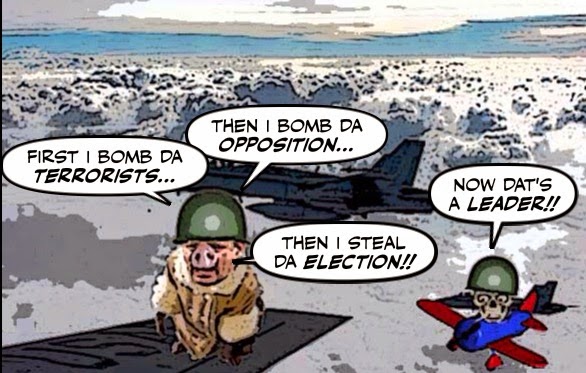 We can see where he is heading, we know we must stop him.

Weakness is out of the question.

Um serial liar Simon? Methinks that is not strong enough. Try this out me here Mogs "perverted insane piece of shit Harper that not know the truth from..." well you know eh?

Your posts are utterly brilliant Simon and keep up the great work in looking beyond the carefully crafted image that harper has been so successful at. Normally I'm not a pessimist but I'm going to go out on a limb here and just say it... I think it's too late to stop this wanna-be republican-canadian president and his brand is too well defined in the minds of enough people and is ripe to keep him in power. The progressive side has blown too many ripe opportunities to tear away the bravado and utter bullshit that his government is peddling. As much as I like Justin and his natural leadership charisma, the best I think he can achieve is perhaps an opposition, I feel Mulcair is going back to 3rd party status. Unless something really damaging comes out in the Duffy trial, we can look forward to Donna Friesen and Peter Mansbridge praising this POS for being one of the longest running PM's.

Yes, Simon. he wants them to attack us!

Trudeau will make a lousy opposition to Harper. It would be a big mistake to put him there.

It is better for the opposition to call him out for lying to Parliament. Look, the people who are going to be impressed by Dear Closet Leader's puffery are already voting Conservative. As for the non Cons voters, Harper's puffery does not change anything. Will it affect the ignorant and disconnected voters? Some of them might be impressed but who really knows how this group will decide who to vote for, if they even show up to vote. Recall that both the Libs and NDP during the minority government years were severely criticized for voting with and supporting the Cons bills that they had disagreed with. Pretending to support Harper's mission creep would make non Cons voters cynical, and confused as to what the opposition parties stand for. This way, we at least know that both of the main opposition parties are still against military intervention in Iraq.

Harper lied he was requested to take a role in this ISIS war and Obama said, he did no such thing. Harper was an abysmal failure in Wales and Harper's speech to the UN, was very poorly attended. No-one is interested in anything Harper says. I think that scared the hell out of Harper. I believe Harper pushed his way into the war, to try and redeem himself.

As Harper is a pathological liar we didn't believe Harper when he said, no boots on the ground for Canada. Hopefully none of our troops will be killed or maimed for life. Harper won't look after our troops, if they are injured for life.

All Harper has done is, invite terrorist attacks on Canada and the citizens. However, all Harper needs to do is, make several closets into bunkers for himself.

There are no limits to how low Harper will go to try to con us into voting for him. I love his quote "If those guys fire at us, we're going to fire back and we're going to kill them". With what? A clothes hanger? Shoehorn? Mothballs? Loreens pumps? This idiot is out of control and I think the old Harper family "bats in the belfry" syndrome has taken over him. Please someone slap the straightjacket on him.

From the perspective of operational security, I question the wisdom of and see no purpose in having an official of the Canadian government discuss publicly details of the armed response to the enemy provocation, although I accept that enemy analysts may have been able to determine, without the confirmation provided by the statement by B-Gen Rouleau and subsequent elaboration by Harper et al, that their forces were neutralized by snipers and possibly, but less likely, that the snipers were members of the CF. At what level, and using what mechanism, would this statement have been approved? Our official and informal statements and responses strike me as being part of a staged performance.

Since the current conflict began, the former Great Economist has taken on the role of the Great War Leader. I believe that there is little that could have complemented Harper’s personal role-playing better than the attacks on CF personnel that took place last fall. Recall his Churchill Moment in the House of Commons back in early October before the attacks:

“ISIL has established a self-proclaimed Caliphate ...

“Indeed it has specifically targeted Canada ...

"It has never been the Canadian way … blah-blah-blah …

“… we Canadians do not stand on the sidelines.

When it was safe to come out of the closet, he wanted more. That’s the consistent characteristic of a player who contends for the role of Tuffy McNutt. After a brush with awareness of his personal shortcomings, the performer will emerge from the closet, glance timidly about for a while and eventually begin to feel secure again and, as confidence returns, he will regain his composure. As soon as he can, he will resume his usual pretense and start mouthing off again, extending a fresh invitation to the enemy. This closes the circle on the return to his comfort zone. Until he resumes the mouthing-off exercise, he won’t feel secure.

In the act now being performed things have become much more dramatic than the “Canadian way” and “not standing on the sidelines”. Now we’ve graduated to: “… we’re going to kill them …”. Well, just look at and listen to us: “We’re going to kill them.” Would that be all by yourself, Tuffy? Well, aren’t we long past that full pant-load! This could only have come from a poser as dangerous and delusional as Harper. We’re about one performance away from full-frontal “Bring ‘Em On”.

I forget which pundit said it, but it was something like this: to take the wind out of Harper's sails, when the vote comes up in the House whether to renew the mission in Iraq, the Opposition parties should support it. This way Harper can't accuse them of being "unpatriotic", and use it as a wedge issue against them during the election campaign.