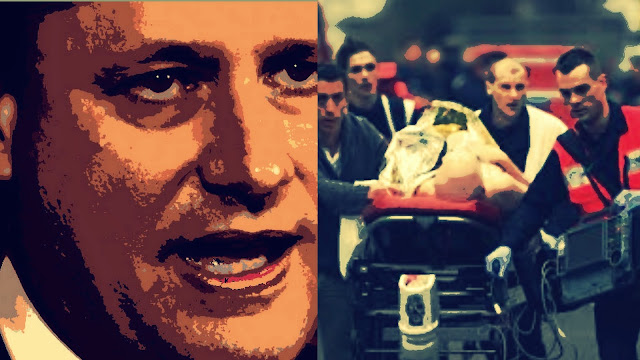 It was a monstrous act of violence, that has shocked decent people all over the world.

The work of crazed fanatics, bullies and cowards.

Gunmen have shot dead 12 people at the Paris office of French satirical magazine Charlie Hebdo in an apparent militant Islamist attack. Four of the magazine's well-known cartoonists, including its editor, were among those killed, as well as two police officers.

Made even more obscene in this country, by the way Stephen Harper is trying to exploit it for maximum political advantage.

After three gunmen stormed a French newspaper’s offices and killed 12 people, Canada Prime Minster Stephen Harper has instructed his cabinet and senior officials to reach out to their French counterparts and to offer assistance, Ottawa announced Wednesday.

Mr. Harper called the attack “a barbaric act” that serves as a “grim reminder that no country is immune to the types of terrorist attacks we have seen elsewhere around the world,” including the murder of soldiers in Ottawa and Quebec as well as the December shootings in Sydney.

According to a report from a friend in Ottawa, the Cons were hopping around Parliament Hill like "cats on a hot tin roof." Barely able to restrain their fevered excitement. Because of course this brutal act of violence couldn't serve their purposes better.

As I told you the other day, they have just produced another attack ad which has yet to be made public, but claims that Justin Trudeau is too "high risk in a high risk time."

And Harper will use this incident against Trudeau and Mulcair next month when he must decide whether to extend the air war in Iraq. And maybe even use it to call an early election.

Even though he himself couldn't be more cowardly.

You know, I feel a special kinship with those who were murdered at Charlie Hebdo, because like them, in my very humble way, I like to mock the bullies of the world. I know how it enrages them, and have received lots of horrible threats myself.

But the bullies must be mocked. And nobody must allow themselves to be intimidated.

So although I ran this video from our best known satirist Rick Mercer a few weeks ago, I think I'll run it again...

Along with my contribution... 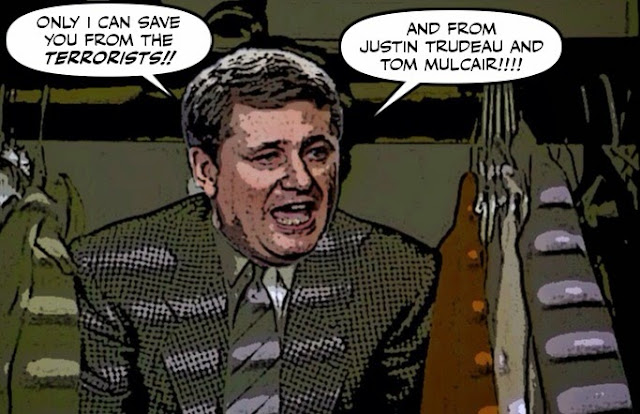 And of course this one... 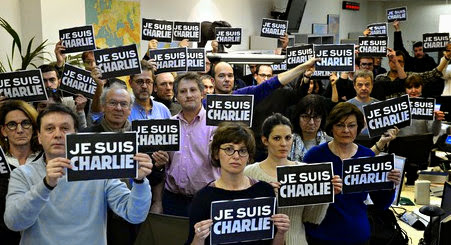 I'll have more to say about all of this later, and how progressives should react to what the Cons are almost certainly planning.

But for now I'll only say that we will remember what those terrorist bullies did, and how our own bully couldn't be restrained.

And we will condemn them ALL...

How to prevent terrorist attacks: Get out of the Middle East and keep your hands off their oil.

So was Harper inside or outside his closet when he ranted against what happened in France?

Very easy to act brave when taxpayers pay for the RCMP to protect him. Even though we do not agree with these crazed fanatics, it will be ordinary Canadians who will pay the price, just as in 9/11, if we keep taunting these crazies (while Harper spouts fighting words from the safety of the nearest closet).

Actually, watching the Mercer spoof of Dear Closet Leader in his favorite hiding place, it occurred to me that he was probably lying in the fetal position inside the closet. Don't ask if he managed to keep his pants dry. :)

A Sad Day for Satirists, Noddy.
Be a Charlie and make your own BUZZFEED list on Steven Harper just like the Department of Foreign Affairs, Trade and Development Canada does for Vladimir Putin.
http://www.buzzfeed.com/dfatdcanada
Charlie Hebdo pulled no punches for anyone.
Anyone was fair game.
I am incensed that we taxpayers fund some punkcon a la Michael Sona to write lists on BUZZFEED.
I can't imagine John Baird having the tech savvy to do it himself.
Hardly diplomacy either, though, so it could well have been Baird's own hand
I want to see those BUZZFEED lists on Harper Crimes.

hi anon...well that would be a start, but there are many other way to fight homegrown terrorists too. Only the Cons of this world aren't interested, because fear is their friend, and they would use it against us...

hi anon...I don't know whether Great Leader was directing the propaganda offensive from his armoured closet, but it seems clear to me what he plans to do. Repeat the mistakes of 911, use fear to try to win the election, and in the process try to turn us into a police state...

hi hinofan...it is a sad day for satirists and cartoonists, and those who love them like I do, and I can't believe that the Cons are even spreading their propaganda on Buzzfeed. It's stunning, and deeply disturbing. But then what isn't in this filthy Harpeland? And we will not truly be free or safe or clean until those foul Cons are defeated...

Simon Anons and hiofan what I find bizarre is how the cameras [video] followed the action like it was staged like a Hollywood flick? Anyone else catch that? Or am I the lone observer? I don't believe the official story as it is just that a story. Did the cop really die or is he now in retirement in the Cayman Islands? Looked to staged to me another Stephen Harper moment...

Only we can save ourselves from You.

hi mogs...I'm not surprised it was caught on video, since it happened in the heart of Paris, and in Europe CCTV cameras are used more than they are here. And in places like London they are even more prevalent. There seems to be one on every block. What struck me about the operation was the way it resembled a military operation, so I would really like to know where the killers got their training...

hi Kim...you're right, and we are going to have to prove it sooner than most imagine, for in my opinion we are heading for an election call next month...