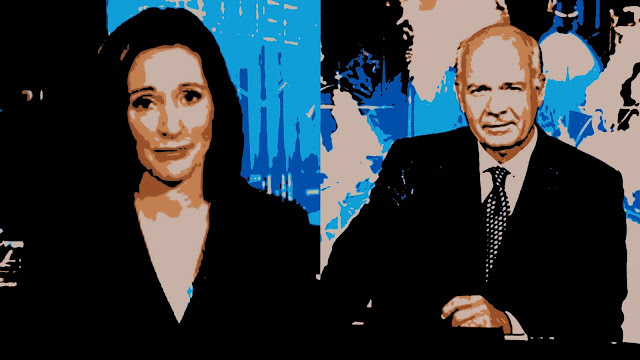 It's taken them long enough, and it never should have happened in the first place.

But the useless managers at the CBC have finally surrendered, and banned paid appearances.

The Canadian Broadcasting Corporation is banning all outside paid appearances by its on-air journalists, following almost a year of controversy over allegations of potential conflicts-of-interest.

The move comes one month after news broke that Amanda Lang, the CBC’s senior business correspondent, accepted money last summer from the insurer Manulife for moderating a pair of seminars, and from Sun Life for giving a speech.

And since Amanda Lang didn't host her show this evening I can only imagine how she's probably feeling... 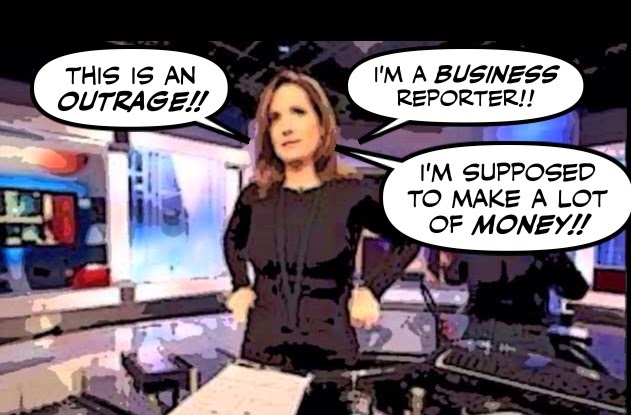 Because as you can see she doesn't seem to get it.

I can look back proudly on many years of reporting, during which I was also paid to speak, and know I was on no occasion influenced. Most events have multiple sponsors and the speakers have no idea which company contributed what amount. But even where that has not been the case, the integrity of the journalism has never been in jeopardy.

And yet I now encounter the casual assumption that if I speak at events for pay, there must be a quid pro quo provided in terms of the inclination I adopt in my reporting. It seems that a distressing number of people happily accept that my reporting must be for sale.

She seems to think it's all about her, instead of the principles of journalism that dictate that reporters should avoid even the perception of conflict, and shouldn't be receiving money from outside sources. Period.

And that goes for all the others.

This week, the former CBC journalist Frank Koller noted on his blog that, in addition to Ms. Lang, the broadcaster’s chief correspondent Peter Mansbridge has taken appearance fees from outside organizations in the past few months, as has Diane Buckner, Diana Swain, and Evan Solomon.

If they want to make more money they should go into PR or advertising. Or in Lang's case go work for a bank.

As for the hapless managers who allowed this situation to prosper under their noses, after the way they handled the Ghomeshi scandal, and because they seem to care more about their image than the safety of their employees.

Now what I want to know is whether they really mean ALL when they say this:

"In order to further our commitment to transparency, we will continue to disclose all appearances on our websites.”

Because one CBC "star" Rex Murphy has never appeared on this list.

And why? Because the CBC managers say he is a " contract employee."

Even though he appears on the CBC News flagship The National, takes tens of thousands of dollars from the oil industry, is a shabby climate change denier, and an appalling right-wing demagogue.

And should have been fired long ago... 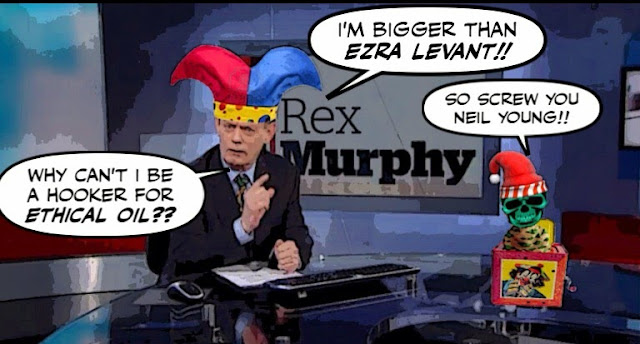 Because until he is, or at the very least is also banned from making paid appearances, the CBC will not fully regain its credibility, as a serious journalistic organization.

Still it is a step in the right direction, and so is this one.

The NDP is promising to restore $115 million to the CBC. NDP Leader Tom Mulcair made the election commitment in Montreal on Thursday. Mulcair said the public broadcaster has been cut by both Liberal and Conservative governments and that an NDP government would commit to restoring the recent cuts made by the Conservatives in the 2012 budget.

Unlike some progressives, I believe the CBC is still a great national institution that should be strengthened not dismantled.

And until it is properly funded it will never be as great as it could be.

But of course it will not be funded properly, and we will not be able to fire its Con board and some of its useless managers.

Until we fire him first... 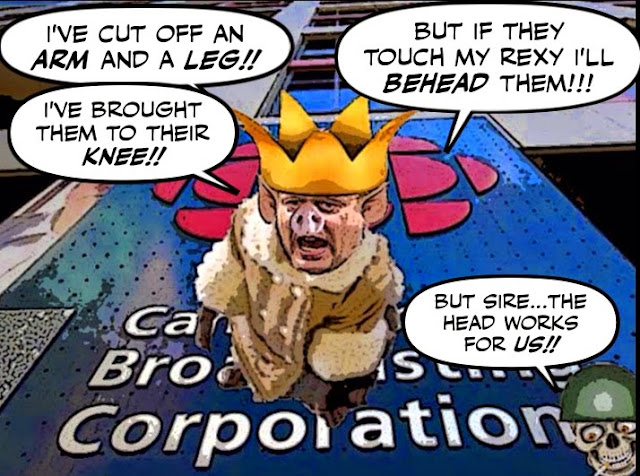 Clean up his filthy mess.

And take our CBC and our Canada back...

"banning all outside paid appearances by its on-air journalists"

Why only the on-air journalists?

Needless to say, I am very disappointed with the way the CBC and Canada (my country) have been going down hill. It appears that "pride" has been overtaken by "riches". WHY?

I guess it all depends on what a person believes will make them "happy".........I'm ok with this as long as they are not harming others while doing it!

If you bribe people to get what you want, then both sides are at fault!

I suspect Rick Mercer, Kathy Tomlinson, and Harvey Cashore (retired) were already in the minority. As such, it would be better to dismantle CBC entirely and then rebuild it once we get rid of the Cons appointed board and managers. They are already behaving like Dear Leader's party in Parliament: deny, deflect, denigrate ... until the public pressure becomes unbearable, as shown by the length of time they took to ban all paid appearances. The latter should have been a no brainer the minute both Murphy and Mansbridge were exposed. Lang's current scandal could have been avoided or at the very least, damage controlled. Alas, CBC is too far gone to be saved.

Thank you for another fantastic blog!