Raif Badawi and the Shameful Silence of the Harper Cons

Yesterday I wrote a post denouncing the Harper regime for its refusal to protest the savage punishment the Saudis are inflicting on the blogger Raif Badawi.

For the price of $10 billion dollars worth of armoured cars.

But what I didn't know at the time is that Badawi's family lives in Quebec, which makes the silence of the Cons even more shameful.

For one can only imagine what his wife and young children must be feeling to know that Badawi will be flogged every week for the next five months.

In this bestial manner.

Still shackled, Raif stood up in the middle of the crowd. He was dressed in a pair of trousers and a shirt. A security officer approached him from behind with a huge cane and started beating him. Raif raised his head towards the sky, closing his eyes and arching his back. He was silent, but you could tell from his face and his body that he was in real pain. 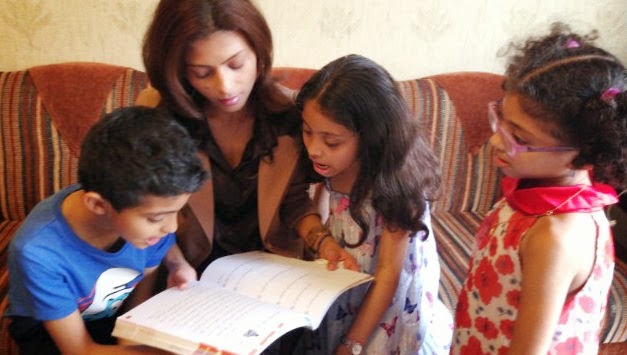 And know that the brutal punishment could kill him.

“We don’t think he can survive this,” said a tearful Anne Sainte-Marie, a Montreal spokesperson for Amnistie internationale Canada francophone, one of the groups working to free Badawi.

But despite this the Harper Cons have remained totally silent.

“His wife and children have received tens of thousands of cards and letters of support from around the world, and this amazing solidarity gave us hope that we could get Raif released from prison before this punishment started,” Sainte-Marie said.

“But no. Our government has not condemned vigorously enough Saudi Arabia’s recourse to extreme corporal punishment. It is beyond outrageous that this country, one of our trading partners, is imprisoning and torturing a blogger.”

And the only thing John Baird has done is retweet this from their absurd Ambassador for Religious Freedom.


So please help put pressure on the brutish Saudis by signing this petition.

Or if you are a blogger, or active on social media, start your own campaign and help embarrass the Con regime.

For we know what the silence says about Stephen Harper... 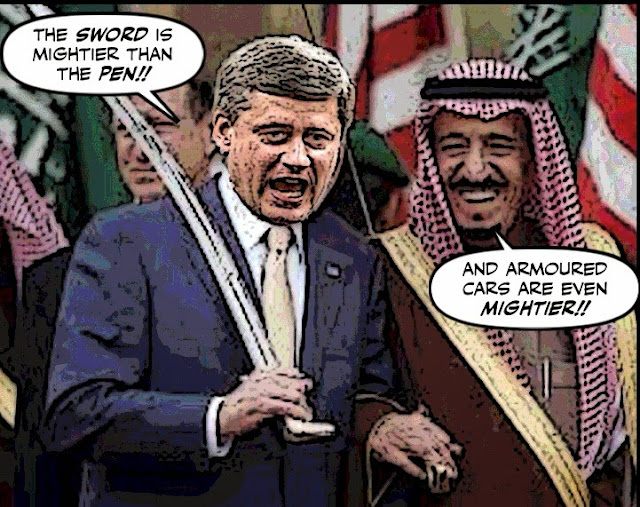 Who would speak out against this crime, so eagerly.


But say nothing about this one... 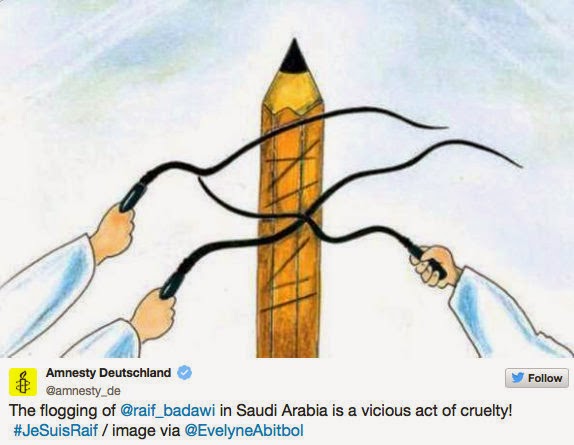 “It is torture. It is against all international standards on humane treatment of prisoners and it is illegal,” said Sainte-Marie. “How can we say we value freedom of expression and have any kind of relationship with a country that flogs a man for writing a blog? This is a medieval form of punishment. This is 2015.”

If we are all Charlie. 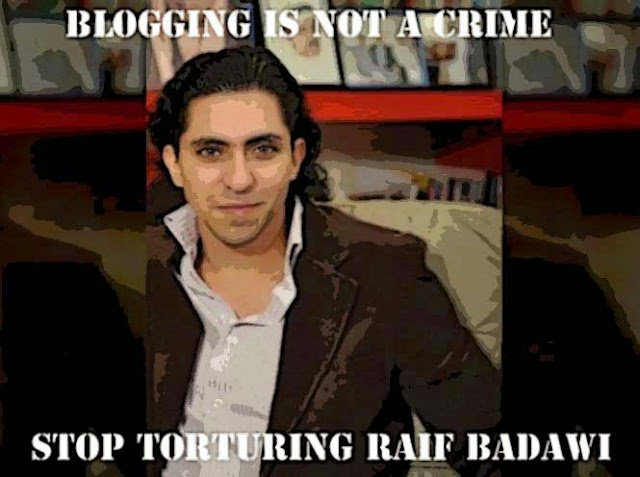 Simon: I scratched the surface on this just a tiny bit and was blown away by how ugly the whole thing really is. When you look at all of the pies that GD has its fingers in, it's disgusting.

Also, when you look at Wikipedia, you'll see a note about the Canadian Defense and Foreign Affairs Institute (CDFAI):
http://en.wikipedia.org/wiki/General_Dynamics#Financials

This CHARITY organization is driving defense policy in Canada. A politically motivated charity, wouldn't you say? And yet no audit from the CRA. I wonder why?

Maybe because all of the donors and participants with the CDFAI read like a 'who's who' of the Canadian media and economic establishment? Check out the people they've bought with the 'Ross Munro Award':
http://en.wikipedia.org/wiki/Canadian_Defence_and_Foreign_Affairs_Institute#Ross_Munro_Award

Canada is being run fascists. They never lost, just took a rest.

Another reason to flog the Harper and his cons in the next election if it ever comes...

Unknown said...
This comment has been removed by the author.
10:03 AM

hi Christine...thanks a lot, and thanks for the link to the cartoon. In this depressing times those cartoons really lift my spirits. I intend to keep on this case for its bestial cruelty offends every bone in my body. And hopefully we can escalate this campaign over the world, before those bastards kill him...

hi anon...thanks for the links, I can hardly believe that those warmongers have an award named after Ross Munro. I realize he was a famous war correspondent, but as a newspaper publisher I find it obscene. I must admit that I was not aware until a couple of years ago that this country had such a big military industrial complex. And needless to say I'm disgusted. This country is being run by fascists and warmongers, and we're going to have to evict them all from the corridors of power...

hi mogs...I like that, let's flog the Cons in the next election, and then deport them all to Saudi Arabia....

http://www.nytimes.com/2014/08/23/opinion/isis-atrocities-started-with-saudi-support-for-salafi-hate.html?smid=fb-share
This article explains what I've been hearing lately about this type of actions and what it's going on the world

I actually watched this (QP) today