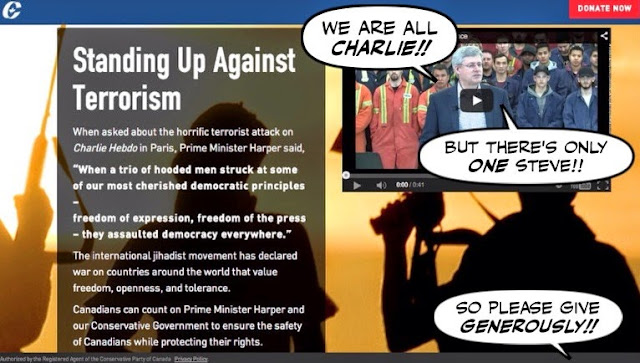 Yesterday I wrote about how Stephen Harper's grubby Cons were trying to use the  tragedy in Paris for their own foul purposes.

By setting up a website to whip up their rabid base, and beg for money to use to smear the opposition.

But I'm happy to report that now that their scummy scheme has been exposed, they are running for cover.

The Conservative Party of Canada has removed a "Donate Now" button from a web page which highlighted Stephen Harper's comments about the deadly Paris terrorist attack, after critics called it crass.

The page on the party website, titled Standing Up Against Terrorism, featured the prime minister's reaction to the horrific shootings at the Charlie Hebdo satirical magazine and noted that Canadians can count on Harper and the Conservatives to ensure their safety.

"This was not, and is not, a fundraising campaign," Hann wrote in an email. "This was to inform Canadians about the prime minister's strong remarks yesterday against the despicable terrorism in Paris," he added. "That said, to avoid any confusion we have had our web editor remove the button from this particular page."

Even though, as the NDP's Charlie Angus points out, nothing has really changed.

"I was actually sick in my stomach when I saw that the response to this horrific bloodshed and killing from the Conservative party was to make some money off it," Angus said in an interview.

"So now what they're doing is they're collecting your information, if you want to be really angry about this, and then they'll send you a fundraising request afterwards," he said. "They are using for their own political advantage the deaths of innocent people in other countries."

And despite what the Cons claim:

Hann noted that it's common practice for the Tories and other parties to include donate buttons on their websites.

The Liberal and NDP statements cannot be even remotely compared to what they did. 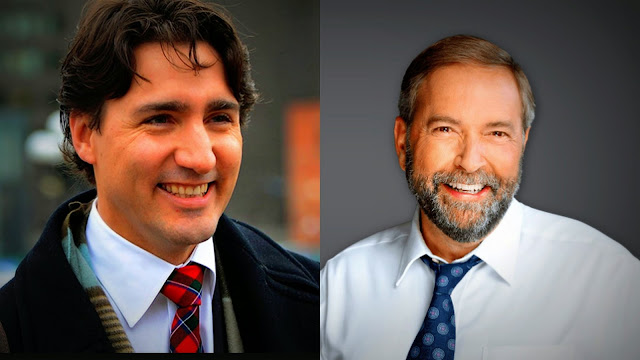 Because unlike Harper, Justin Trudeau and Tom Mulcair are decent Canadians, so it doesn't matter whether they had a donate button or not.

Their statements only reflect our collective grief and appeal to our noblest instincts. While the Con's shabby fundraiser only appeals to the lowest. It's just more crass propaganda aimed at glorifying their depraved leader.

And this is still true:

Stephen Harper cannot be trusted to ensure our safety, because he is counting on fear to help him win the next election.

And he is no Great Strong Leader... 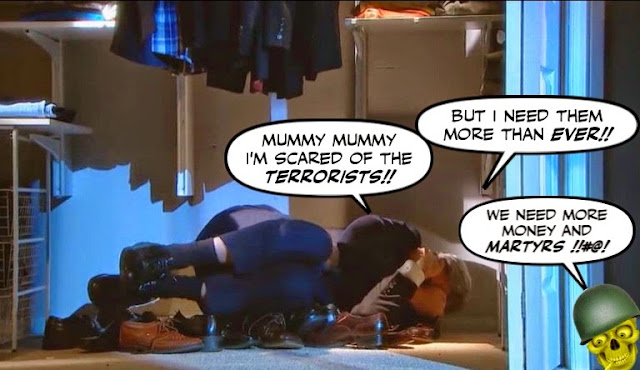 Just a grubby, cowardly Con who would take us into his deranged darkness.

No champion of democracy. On the contrary its mortal enemy.

And still the greatest single threat to Canada and its values this country has ever known...

Harper's sickening display as "great closet leader(pant shitter)", his empty "thoughts and prayers" and his endless "condemnations" are such a load of shit. A true leader would not have run for the closet when push came to shove, regardless of what he says he was supposed to do because we know he only does what's best for him. How convenient that in a desperate situation he decides to follow security protocol while women and a wheelchair bound person are left to fend for themselves. He's a coward and a fake trying to milk votes in the most despicable way.
The day he's booted from office will be a happy day indeed.

Harper also encouraged Israel to make war on Palestine. Now Harper is bringing over 10,000 Syrians. You know that Syria when children didn't wake up in the morning because, they had died from poison gas. That Syria, Harper itched to bomb.

Harper is in, the lowest form of the human species. There is no end to Harper's treachery, cowardice and his hypocrite behavior. Harper's cabal is no better, they have no self respect supporting scum such as Harper.

Yes and the cons are polling in B.C. to see how citizen/voters feel about our former premier, el gordo, Gordon Campbell, who is currently running Canada house in London and running up huge bills.

the pollsters were giving 5 names, his among them and asked which were considered trusthworthy. the betting money is a "senate appointment". well if Canadians thought the 3 "suspended" senators were something else, you haven't see el gordo, the former premier of B.C.:
- organized the largest mass firing of women workers in Canadian history (9K)
- the HST, wasn't thinking about it and implemented it months after being voted into office.
- started the tread of B.C. having the highest child poverty in Canada, back in the early 2000s which continues to this day.
- said he wouldn't sell our profitable provincial railway and then "leased it for 999 years" to the railway company headed by his "bag" man.
- ran up huge deficits in the province.
- destroyed fish bearing streams by "giving them away" to his friends as part of run of the river projects
- forced B.C. Hydro to sign contracts with these run of the river companies to buy the power at 10 cent per kw and sell it to B.C. consumers at 3 cents.
- built a convention centre and had it run over budget by 300M
- put a new roof on a stadium, which went several hundred M over budget.

So Simon, this maybe P.M. hide in the closet's "best" appointment to the senate yet. a former disgraced premier from B.C. Well you do have to wonder why a government/conservative party is running el gordo's name past the public in a poll. See Laila Yuille's blog for more details.

hi anon...Harper is simply pathetic and sounding more like a tea bagger every day. But of course he is doing it to try to inflate terrorist fears in this country for crass political purposes. And yes, the day he is defeated will be a happy and glorious day indeed...

hi anon...as I said above Harper is trying to fuel fears of a terrorist scare in this country, to try to scare people into voting for him. And you can't get any lower than that....

hi e.a.f...from what I understand of BC politics, Gordo has served Harper well, and will no doubt make a fine senator in the company he deserves...