The Great Pope Francis: Not as Good As Advertised 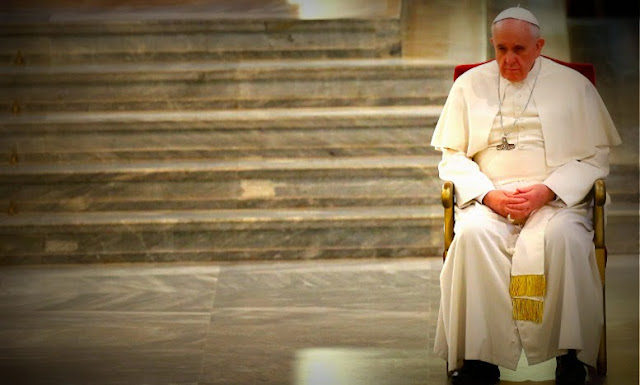 I did have such high hopes for him. He did seem to be the best Pope I have ever seen.

He did say some great things about capitalism and climate change.

But it turns out Pope Francis is not as good as I thought. Just more of the same.

Or just another old reactionary.

For first he suggests that religion cannot be mocked.

Pope Francis on Thursday stirred fresh controversy in the debate over freedom of speech and individual responsibility with a remark that suggested that a violent reaction to insults should be expected.

And that those who do mock it should expect to be attacked...


Even though Jesus preached that one should turn the other cheek, and that violence is not the answer.

Then he said that women must not use contraception.

Pope Francis issued his strongest defence yet of church teaching opposing artificial contraception on Friday, using a rally in Asia's largest Catholic nation to urge families to be "sanctuaries of respect for life."

Even though for many poor families every extra mouth means more hunger for the others... 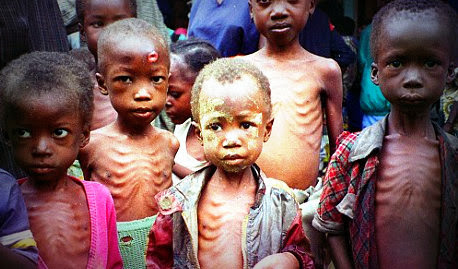 Because unlike Jesus, most people can't feed a multitude with five loaves and two fish.

But for me this was the lowest blow.

Pope Francis has attacked same-sex marriage, saying those who support it are attempting  to “redefine the very institution of marriage”.

“The family is threatened by growing efforts on the part of some to redefine the very institution of marriage. These realities are increasingly under attack from powerful forces which threaten to disfigure God’s plan for creation.”

For suggesting that gay marriage threatens the love of others is simply despicable. 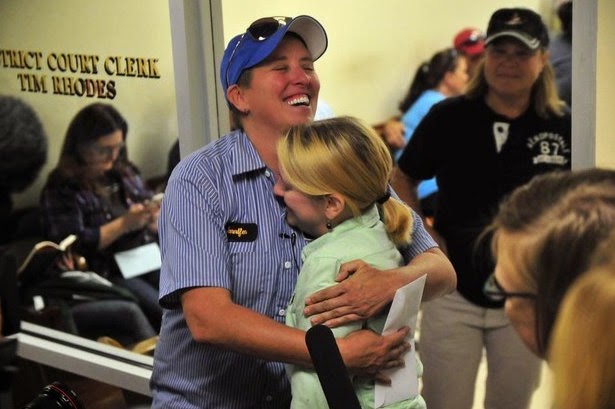 It makes him no better than his predecessor, the Nazi Pope Benny... 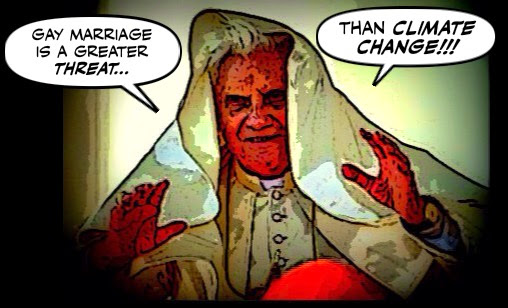 And can only make me wonder about Francis' behaviour during the dark days of the Dirty War in Argentina... 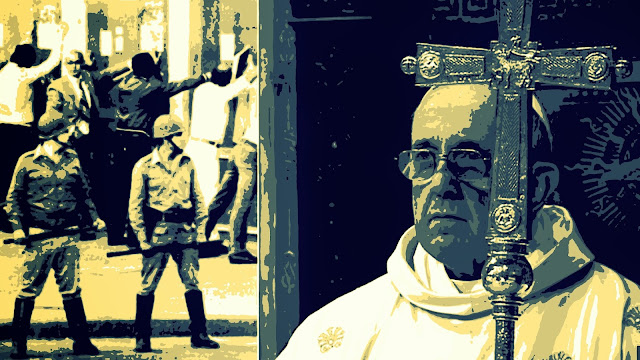 When a fascist junta murdered 30,000 people, including many priests and nuns, and he never raised his voice against them.

You know it's ironic that even though I'm an atheist, because I don't believe in Heaven.

Because I believe in love and kindness like this gay brother does... 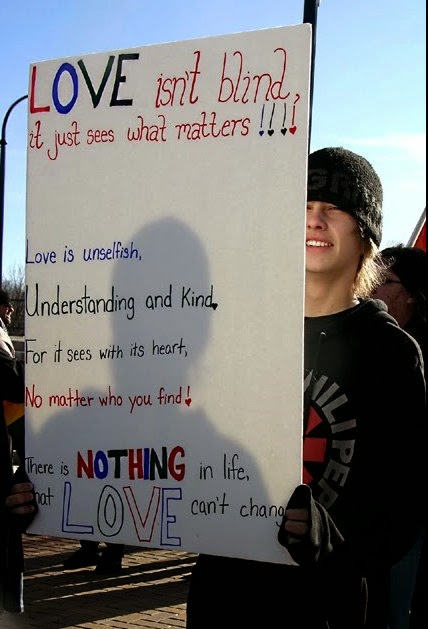 But yeah, I am disappointed. It seems the Catholic Church will never change.

The Pope is just another old reactionary.

And not as good as advertised... 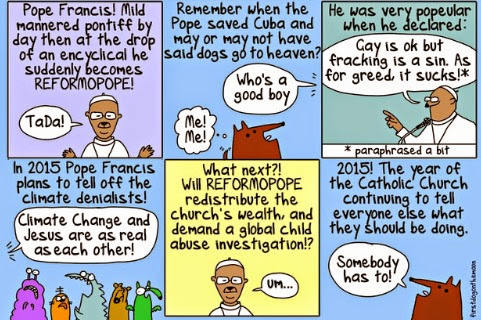 religion is the emotional bulwark collective of the neurotically insecure and weakminded, Simon.
Science can fly us to the moon - - religion can fly us into the sides of buildings and burn
people alive for "heresy"

Speaking of the powerful forces which the good Pope refers to, I have a hunch that he to is subjected to very powerful forces, those from a cabal of very evil old men who claim to speak for the all powerful god they use to manipulate the masses. In other words, stop being so human. To me this was very predictable and the more moderate pope would not last in a structure that is so powerful, corrupt and infested with men who think they rule the world.

I'd still like to hold out some hope for him. It's possible that he has seen a need to slow down his "reform attempts" so that he doesn't wake up dead some day.

The catholic church ruled from 500 to 1500. It was called the dark ages. Enough said.

Why do you even care what the Pope says?

This may come as a shock, but he doesn't belong to you, or me, or anybody for that matter. You don't get to dictate what he says, and nor do I. His job, as the occupant of the Seat of Peter is to proclaim the truth. You don't like what the truth is, so you've elected to take your ball and go home. That's entirely your prerogative.

But posting in the fashion suggests strongly to me that your atheism is in reality not deeply believed. What do you care? Were you really ignorant of Catholicism enough to think that the Pope has the power to change doctrine? Did you really believe that the Pope was going to make homosexual marriage, contraception, and condoms morally permissible?

Fr. Nicholson suggested that the longest confessional line in the world was a gay-pride parade. I'm thinking he might be quite right about that.

Simon: I am with the Pope on this one.

You may or may not know that the co-founder of Charlie Hebdo had strongly criticized his former company for exploiting Islamophobia for profit. He even said that in fact his company was on the verge of bankruptcy until they stoked the fires of Islamophobia with their provocative cartoons after the 9/11 attacks: http://money.cnn.com/2015/01/16/media/charlie-hebdo-henri-roussel/index.html?sr=twmoney011615hebdofounder0540story

I would also refer you to my more detailed comment on another blogsite on this matter: http://blongstaff.blogspot.ca/2015/01/the-popes-diminished-freedom-of-speech.html

Simon: Thought I'd also include this. Hebdo fired their own cartoonist for alleged anti-semitic remarks thus begging the obvious criticism of double standards: http://anonhq.com/charlie-hebdo-fired-anti-semitic-cartoonist-ridiculing-judaism-2009/

hi anon...I know that's one of the reasons I'm an atheist, I'm appalled at the state of the world, and how much violence is being carried out in the name of religion. As I said in my post I'll take any suggestions from anyone on how to make the world a kinder, gentler place, but I believe that this planet is our heaven and our hell. And what bothers me about the idea of heaven is that it can lead people to live for that mystical place instead of taking care of our own planet. I don't try to impose my views on others, and I expect them to do the same...

hi bcwaterboy...I wouldn't be surprised if Francis is under a lot of pressure from the corrupt forces in the Vatican, as he has been quite critical of some of them recently, and if I was him I would fear for my life, and employ a small army of food tasters. I still think he is the best Pope to come along in a long time, but I found his comments on gay marriage truly distressing. It's one thing to be against gay marriage, but to suggest that it is a threat to anyone is very unpleasant and can only cause harm and fuel hatred. In fact, gay people have been reinforcing the institution of marriage not undermining it. But as you point out, the structure is infested by those who bow their heads to the patriarchy and only time can heal it...

hi UU4077...I also hold out some hope for him, I hope my post didn't sound like I didn't. I recognize that he has done some good, and if he survives his enemies in the Vatican he may still do some good. His comments on climate change and the cruelties of capitalism have been excellent. But as I told bcwaterboy his comments on gay marriage bothered me, because love is a threat to nobody. Gay people are still brutally oppressed in many parts of the world, and in that regard his comments are not helpful, and he should know better. And yes, he may have felt the need to throw the hard men at the Vatican a bone lest he end up dead, which would not be a good thing...

hi Pamela....yes that's true, and all religions have been responsible for an incredible amount of bloodshed and suffering. But although I am an atheist now, I was raised by good Christian parents so I know that it is possible to be religious and a good person. And as you know I'm always hoping for the best, and looking for the good in everyone...

hi anon...please spare me from your religious fanaticism and your barely repressed homophobia. The Pope is human as we all are, and a major figure on the world stage, so I do care what he says. I've explained above why I am an atheist i.e. I don't believe in the notion of heaven. However, I am not as inflexible as you are, I am open to good ideas from any religion, and I freely admit to using it as a tool to console the dying. In other words, I am a humanist and proud of it. Furthermore I know enough about Christianity to know that gay marriage, contraception, and condoms, have nothing to do with the message of Christ and everything to do with the patriarchy, and the abominable old men who have corrupted its teachings. And as for your suggestion that a gay pride parade is the longest confessional line in the world, it did make me laugh, but only because it's so absurd. Please try to be a better Christian, for your foulness is practically Satanic. By the way did you know that the word for Pope in Spanish is Papa? Which is the same word for potato? Isn't that interesting... ;)

hi anon...I don't object to the Pope criticizing the tone of some of the Charlie Hebdo cartoons. What I object to is his suggesting that could justify violence. You may have noticed that I haven't published any of those cartoons because I find some of them crude and vulgar. I am an atheist, and as you know I do mock the bullies of this world. But I don't see any point in mocking people's religious beliefs, just criticizing their cruelties. Still nothing can justify killing people over a drawing. And as I explained above, it bothers me that Francis would accuse an oppressed minority of threatening anyone, and he is definitely wrong in that regard...

Wow. I'm at best, at the most generous possible an amateur theologian, and the idea that the Catholic Church is not pretty-much exactly what Our Lord desired and intended is so completely ignorant, that this little speech of yours actually exposes you for the ignoramus that you are.

The evidence that you actually know nothing about Our Lord is actually overwhelming, if only from this post alone.

And sadly, your presumption of holiness is amazingly typical for you. Are you sure you're not an extremely elaborate, very persistent troll?

You're going to need it.