The Day Maxime Bernier Went Over The Deep End. Again. 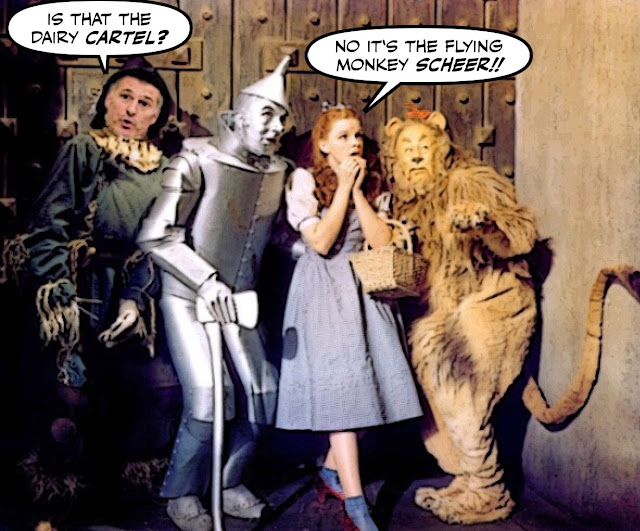 As you may know, Maxime Bernier has always reminded me of the scarecrow in the Wizard of Oz.

The one who is travelling with Dorothy and the others, in the hope that the Wizard will give him a brain.

Because as he proved again yesterday, he clearly doesn't have one. 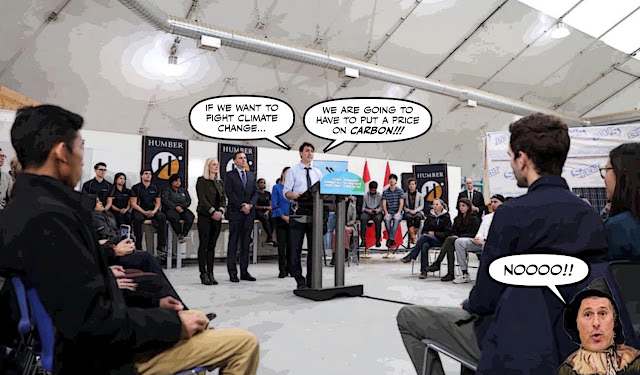 For it seems that Justin Trudeau's decision to impose a carbon tax on provinces  refusing to join the fight against climate change, was the...um...straw...that broke the scarecrow's back. 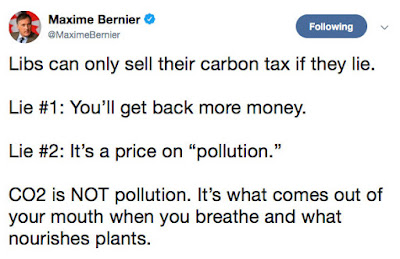 And when Gerald Butts,Trudeau's Principal Secretary, replied in this manner.

That only set Bernier off further...

And so did this tweet from the former Olympic kayak champion and now Liberal candidate Adam van Koeverden.

Which had Bernier posing as a scientist... 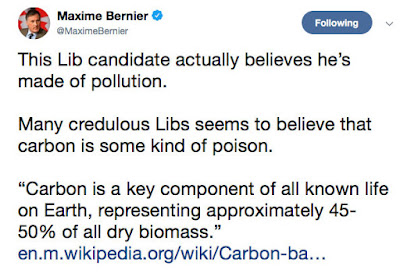 Which only proved that when you're as dumb as Bernier, a little knowledge can be a dangerous thing. Sad.

But then as he himself made clear in a tweet this time aimed at Andrew Scheer... 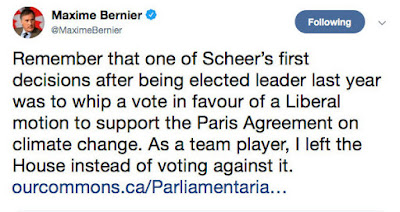 Mad Max was never in favour of fighting climate change.

So naturally his journey to see the Wizard ended badly... 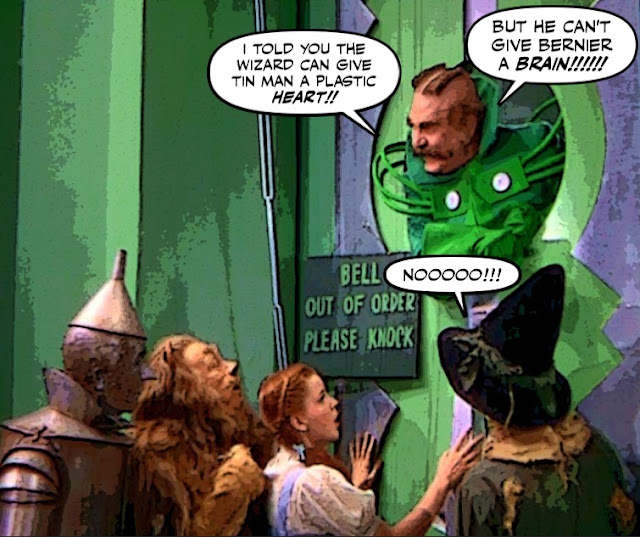 And if we want to save the planet.

Its sad that the argument that because we breathe there is nothing wrong with CO2 has traction. I think Mad Max is angling for a shadow cabinet spot in the Ford goverment.

Max seems to enjoy science, so maybe he'd like to do a little experiment.

Purpose: Pollution is defined as a substance that has harmful or poisonous effects when introduced or present in the environment. Climate alarmists claim that CO2 is pollution and the purpose of this experiment is to debunk that theory once and for all.

Hypothesis: Since CO2 comes out of people's mouths when breathing, it is not pollution.

Method: Obtain a common plastic shopping bag. Place it over one's head, and secure it snugly around the neck. Breathe normally and observe effects.

We await your results, analysis and conclusion Max!

Another comment I heard on Radio-Canada asked Bernier what happens when you leave a car running in a closed garage...

Gerald Butts hit the nail on the head not only for Max but for most of the right who keep trying to bullshit their way around the facts of climate change and steps to mitigate it.
They are mere extensions of greedy corporations who fund their misinformation campaigns and reward them with cushy jobs once their political lives are over. There is no love of country where these assholes are concerned. Love of money, self and power are all that matter and if kneeling before their corporate masters is what it takes to achieve it then so be it.
In Max's case you cant fix stupid. For Scheer, he knows what's at stake and that is how will it affect him.
JD

Maxime Brawndo: He's got what plants crave! (Which means Doug will probably want a cut of the sales.) This idiot supposes that he can out-math a math teacher, out-science the scientists and out-think Nobel laureate economists. Gerry is correct, the only thing that Max is producing, like his right-wing fellow travelers, is noxious methane every time he opens his mouth. Or some other orifice at the back of his, uh, motorcycle bumper...

We're all made of water, and yet it's possible to drown.

Perhaps Max and Andy can take the "Dihydrogen Monoxide Challenge" if they're so certain that you can't have too much of a "natural" thing...

I am hoping that Bernier does well enough to split the Conservative vote, but if his party is going to be party of climate change deniers I can’t see it getting very far. I wonder if the scarecrow is smart enough to figure that out? If he isn’t he really does need a brain.

Hi Steve...Bernier would fit in well with ape Ford and his gang of climate change deniers, but he’s still working on building up his new party. And of course, we should all wish him well, for the bigger his party gets, the more damage it will do the Cons...

Hi anon...please try not to give Max any ideas, because he is known to believe the last thing he reads, and as Injust told Steve we need him to steal votes away from the Cons. I used to spend some time during the Harper years, urging Cons to vote for the Christian Heritage Party. But now it’s Maxie all the way...😺

Hi lagatta...OMG. Let ‘s hope Bernier doesn’t try that one either. But I will claim credit for having dubbed him a long time ago, the bobo from the Beauce. Golly I’m smart...😉

Hi JD...I must admit I am conflicted by the way the right-wing refuses to accept the reality of climate change even now that it’s impossible to avoid. On the one hand I’m angry that they are writing off the future of so many in the name of human greed. On the other hand I’m delighted that they are prisoners of their own ideology and will all go off the cliff together....

Hi Steve...yes the National Post and the Sun are still peddling cllimate change denial, but please the Koch brothers are pronounced like the COKE brothers, which when you think about it is only too appropriate...

Hi Jackie...I really don’t know what to think about Bernier’s Twitter follies. At first I thought his poor English might have something to do with it, but now I think it’s just idiocy. I mean who would make his pinned tweet an old interview with the “great Mark Steyn?” But as for Scheer dismissing the work of a Nobel prize winner, that.’s not just idiocy it’s evil, and for that alone he should be defeated...

Hi anon...you’d be surprised how many climate change deniers there still are out there, even as our summers get hotter and hotter. And all we need is for Bernier to get 10% of the vote, and the Cons won’t have a chance of winning the next election...

Hi Jackie...yes, I’d like to see that. Andy and Max can jump into the St Lawrence river and float merrily out to sea. Or better still, challenge each other to a race, on the backs of cows supplied by the dairy cartel. They are clearly in some kind of contest to see who is the most absurd Con clown, and that should settle the matter...😀

gee why don't we put Bernier in a room with no O2, just carbon. see how long he stays in. it may be used by plants but they also need O2 or they die. That man is dumber than a sack of hammers.