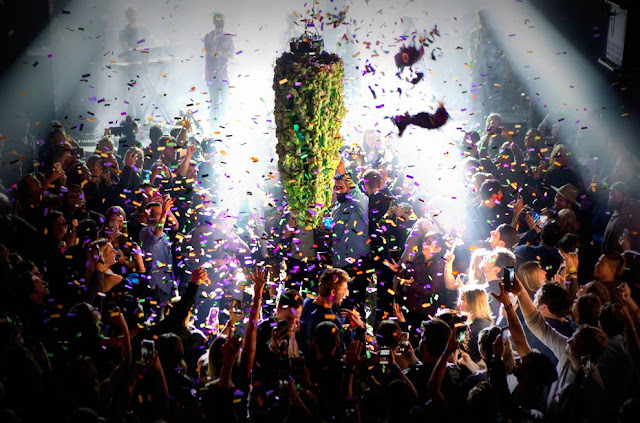 It was one of the biggest parties this country has seen for a long time. The one  that began when the bud came down at the stroke of midnight.

And millions of Canadians celebrated the end of the Great War on Marijuana.

But not Andrew Scheer.

For him the whiff of weed in the air must surely have reminded him of Justin Trudeau, the leader who had the guts to legalize marijuana, and the man Scheer hates more than anyone else on earth.

So the party pooper who would be our jailer, just couldn't restrain himself. 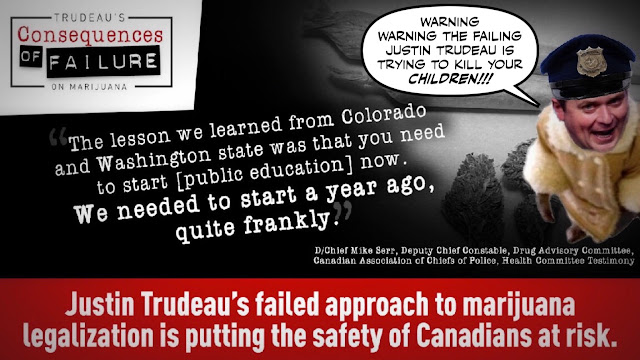 He just had to accuse Justin of threatening the lives of Canadians. Again.

And make it only too clear, that he hates the legalization of marijuana so much, that he would re-criminalize the drug the moment he came to power.

He won't come out and say it of course, they don't call him Weak Andy for nothing. But that incoherent diatribe was nothing but reefer madness.

And if you look at his body language, and you see him struggling to conceal his true feelings, can anybody doubt that he would send thousands of mostly young people to jail to pleasure his bloodthirsty base, and his inner religious fanatic?

Just like his master Stephen Harper did, in the darkest and most depraved days of the  Con Regime. 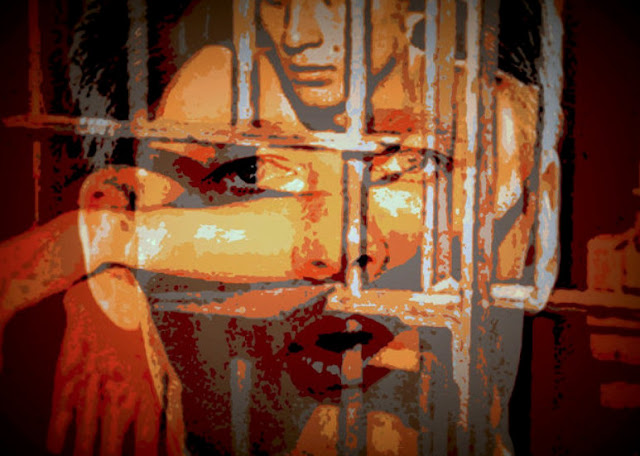 And for obvious reasons. 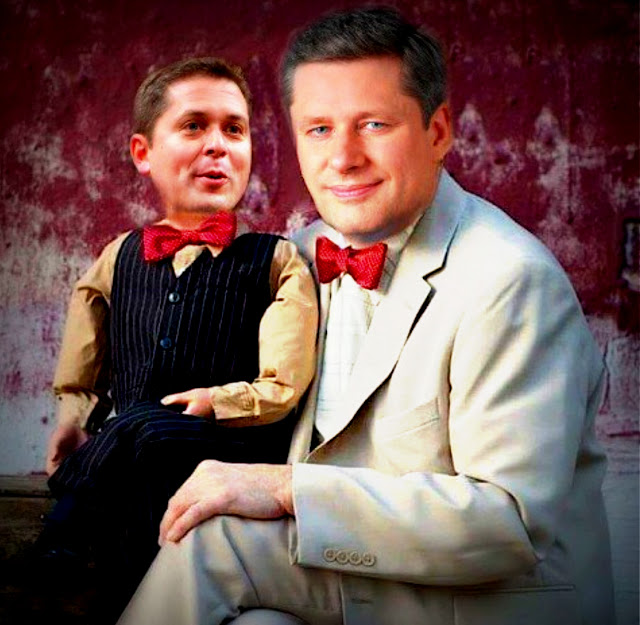 Like so many other Cons, Harper created Scheer in his own image, infused him with his own madness... 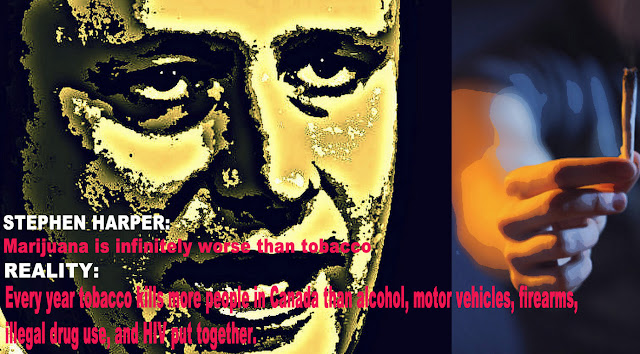 And made him a pathetic little punishment puppet who can't decide whether he's working for Jesus or Trump... 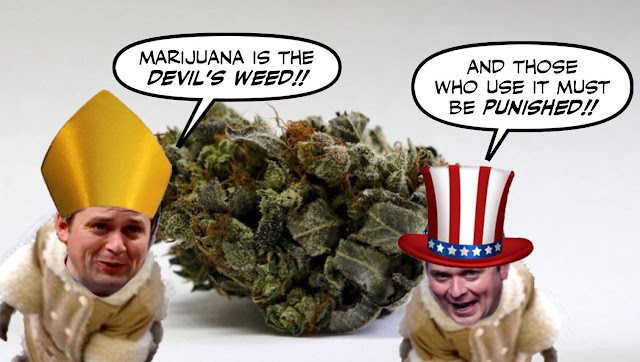 Even though an overwhelming number of Canadians support legalization.

And even the Con editorialists from the Globe and Mail believe that Canada is setting a good example for other countries.

The essence of the moment is that a government has acknowledged the scope of cannabis use by its citizens, and the reality of its limited health risks, and pushed through a bold reform. That alone makes Oct. 17, 2018, a remarkable day.

But Scheer hates Justin Trudeau with a passion so diseased it verges on the homicidal.

And just like Donald Trump set out to destroy Obama's legacy, so would he seek to destroy Trudeau's legacy by re-criminalizing marijuana. 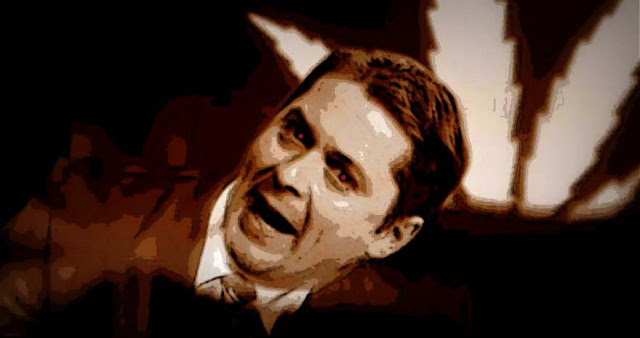 The warning couldn't be clearer, or starker.

Or we destroy that monster and his grotesque Cons in the next election.

Or they'll destroy our Canada...

Of course he doesn’t have the courage to say he’ll reverse it if elected.

Seems like legalisation has Scheer's head popping like a rogue seed in a joint.
Mark my words Simon, the first report of a car accident involving cannabis will have Scheer screaming like a rabid hyena even though alcohol will still be responsible for 90+% of all substance use related accidents.
Facts matter, unless of course you're a Con.
JD

Why does someone not call him out. Weak Andy are you going to leave Pot alone if by some cosmic weirdness elected. Get all the cons on their broken record.

Yes, Scheer, let's bring back prohibition. It worked so well.

They have had too many years to understand what the consequences of criminalizing marijuana is, namely broken lives, families and futures. They have had several years to set up law enforcement, social programs and education seminars to address the consequences of legalization. There will be problems, but these can be better addressed by experts in healthcare and social studies fields, rather than the police and criminal justice system. Can you say over crowded courts and over extended police now being freed up to work on more serious crimes, saving monies for the taxpayer? I look forward to the day when the next step moves drug addiction and drug use out of the courts and places it also in the hands of medical and experts in social services where it can be treated as the health issue it obviously is.

Unlike Drug Ford, I think Andy is a fundie teatotal.

You're right Simon, this bulldozer approach is an obvious personal vendetta. For all the dehumanizing rhetoric the basement-dweller mobs on social media are throwing about "NPCs" (non-playable characters, basically pixel-glitch characters in a video game who just say the same recorded phrase over and over), they're the ones who go into a frothing rage whenever they hear "Obama," "Hillary" or in this case "Trudeau."

The Republicans used "Obama" as their gateway drug to turning back the clock on 100 years of progressive reforms, if not all 240+ since the country was founded. They don't even like Lincoln for obvious reasons. Trump was at a rally last week praising Robert E. Lee and denouncing Grant as little more than a useless drunk who got lucky against a "really great, terrific general." The same is true of the Harpercons who are obsessed with targeting Pierre Trudeau's son to go back 50 years and erase his father from history. First they came for Justin, then they came for Pierre, then they'll go for Pearson, Diefenbaker (a "Conservative in name only"), Laurier... Heck, if they could, they'd rewrite the books such that the Puritans landed up north and formed a thousand-year Reich!

Whereas liberals and progressives simply want to stop honoring whitewashed versions of Columbus and MacDonald (and honoring Confederate traitors altogether), the right-wing reactionaries want to completely obliterate their "sworn enemies" who stand for anything good. Note how that terrorist group in Québec posted on social media that they wanted to blow up a statue of Pierre and Mad Max basically said this is what you get for toppling "our history." Whose history? Why, only those whiter than supply-managed dairy, of course!

Historical revisionism is one of the hallmarks of fascism. Herr-ball Harper and his deputy ding-dong Scheer are chomping at the bit to white out the parts they don't like. That starts, of course, with doing a Find and Replace for every instance of the name "Trudeau" including the Charter itself. They want to roll it up and burn it in a puff of smoke.

And for that, I hope they end up getting blazed up and scorched at the ballot box, and marched right out to the sea.

The CBC is already teeing people up for when that happens. Endless stories about driving, edibles and children the whole gambit.
I note the CBC has dropped all concern about opioids and fentanyl and alcohol fueled violence. No comparisons between alcohol and pot re domestic violence, murder, and car accidents.
Get ready for a unified old fashioned Ottawa media feeding frenzy with a Scheer tagging along.

Kind of like how they exploit Marissa Shen's murder and the Danforth shooting to beat Trudeau over the head about refugees and Muslims in general. Yet of course they don't have a word to say about the Bissonnette, McInnes and Lepine types running amok throughout the country -- and even seeking office under their own banner.

The next peep I hear from Andy or one of his NPCs (Narcissistic Personality Conservatives) about "returning ISIS fighters," I want to see someone, anyone, I don't care if it's the Tru Grits or NDP or Elizabeth May or an uninvited Rhino delegate, demand that he publicly denounce Faith Goldy by name. Or Conrad Black, why was that criminal and hate-mongering propagandist allowed to come back home?

I believe an American cousin in Detroit made a lot of money out of prohibition. He probably would be a drug dealer today.

Scheer doesn't have any real platform so all he can do is attack whatever the federal Liberals are doing.

He needs to get over it. Weed is now legal and that isn't going to change. Yes, there have been more impaired drivers in Washington State, but really, would they have been drinking or on something else, if not weed? There will be enough ads on t.v. warning of no toking and driving and that will be it.

Scheer doesn't want to understand that for some weed actually helps them manage their pain and helps with migraines. He needs to get over his self righteous self.