Donald Trump and the Growing Darkness 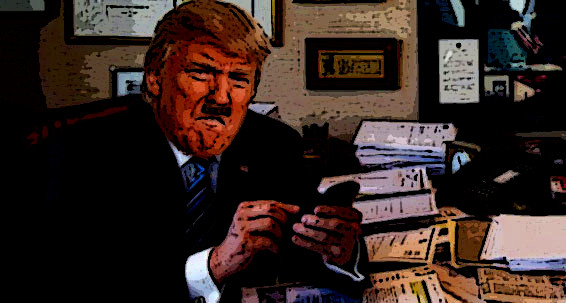 Afterwards just about everybody agreed, it wasn't one of Donald Trump's better days.

He was up at 3:14 am angrily tweeting out this: 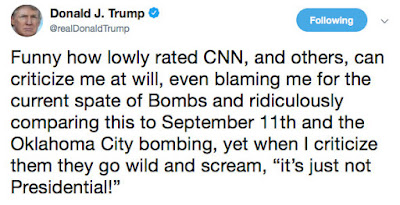 Only to have his day, a few hours later, become even worse. 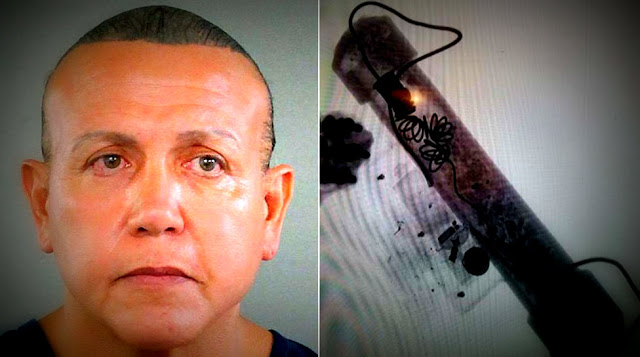 When the man who had been sending pipe bombs to people and places all over the country, including one to CNN, turned out to be a Trump Superfan.

The man arrested by the authorities on Friday in connection with a series of bombs sent in the mail appears to be an outspoken supporter of President Trump, according to his posts on social media.

A washed up stripper who drove around in a van with pictures of Trump all over it... 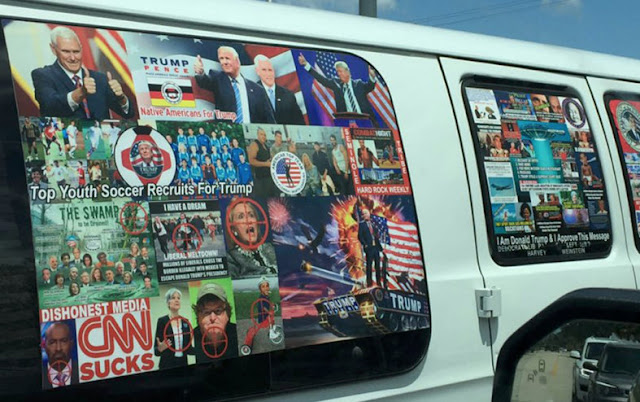 As well as pictures of well known Democrats with rifle cross hairs painted on them.

None of which seemed to bother Trump, for he was more concerned about other things.

Like the upcoming mid term elections, and his chances of avoiding impeachment.

And as for some of his other fanatic supporters, well they just couldn't believe it.


Because they are THAT stupid, or that deplorable... 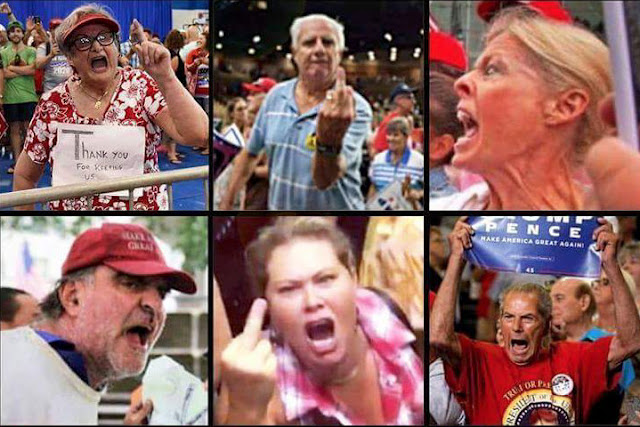 As Hillary Clinton once called them.

Who it turns out, unlike Trump, knew what she was talking about.

But of course that was so long ago, and the picture is so much darker than it was then, and getting darker by the day.

For can you imagine how those beasts might react if their godly Trump was impeached or indicted?

Still at least now most decent Americans know what they're dealing with... 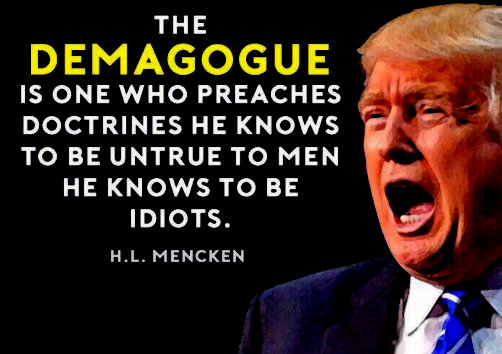 A dangerous demagogue and a would be fascist... 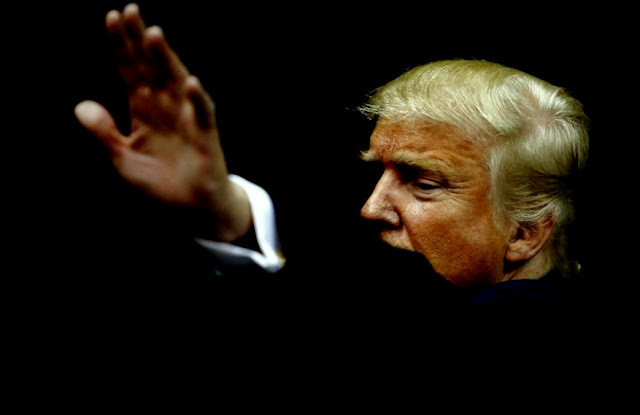 Who must be destroyed.

Before he destroys them...

Why even bother giving the deplorables any public attention at all? How many "Cletus safaris" does the media have to go on before they realize that the Mandarin Manson's cultists are unreachable and obviously hate their guts? They need to stop covering his Nuremberg rallies, and stop giving "both sides" to a nonexistent debate with bad-faith whataboutists like Hugh Hewitt ("what about Scalise? What about 'antifa'? What about the people who yelled at Mitch McConnell and interrupted his dinner?") over whether "traditional conservatism" can or should be saved from Trump or "both sides" are "too polarized" and equally to blame. Cut 'em off and shut 'em up.

Enough false equivalencies. They need to embrace Popper's paradox, de-platform the whole lot of them and focus on the threat at hand. But no, they won't do that because that would be "biased" and feed into the poor, beleaguered fantasists' worldview that their "way of life" is under siege by the "liberal globalists." Well, obviously the current approach isn't working to dissuade them of that belief, so might as well call their bluff and shut off their megaphone. All they do is yell in an echo chamber as it is.

Have the U.N. monitor the upcoming elections. The deplorables will moan that the results are illegitimate anyway. The U.S. is a failed experiment on the verge of another civil war. Time for plan B. Fumigate the GOP with investigations as far as the eye can see; pull the plug on Fox News, and put Zuckerberg and Dorsey on the unemployment line before someone else gets hurt or killed. This has to stop.

Not ONE murderous white supremacist nutcase, but TWO unrelated ones. I'm still crying about the murders of people at prayer in the Pittsburgh synagogue, which brought back the Québec Mosque murders. There was even a bris (ritual circumcision) going on; the Nazi bastard could have killed a tiny baby.

He hated both Jews and Muslims, as well as "immigrants" in general.

But there are "good people on both sides", including murderous neo-Nazis.

The best Trump Graphic done in They Live style.

The pictures of the people above, demonstrates how clearly angry these Americans are. They can not be reasoned with. About all that can be done is ensure their president is prevented from carrying on like he is. He is saying its O.K. to act in this manner.

They aren't just deplorables, they look like rabid animals.

There are those who say the civil war was never over for some Americans and the fight continue to this day. I'd agree. With Trump as President, and his ravings, things which were once not socially acceptable to say in public, are now O.K. People think its O.K. to say these things and they think its O.K. to send bombs and murder Jews. Trump's last dog whistle with his line of he was a "nationalist" said it all. Out came the dogs of war. This isn't over by a long shot.

Canada had better rev up their refugee department because it won't just be people from Haiti coming in via the U.S.A., There could be millions of Americans arriving, starting with those who are gender fluid or transgender. Trump wants to change federal legislation so that one's birth certificate can only list male or female based on your genitals at the time of birth. It would be against the law to change what you were classified as. A few more shootings in Synagogues, and they will happen, Jews who had relatives in Europe, will start fleeing to Canada also.

Trump put kav. on the bench for a reason. any laws he passes which do violate the Constitution will not be over turned by the American Supreme Court. With some of the chatter south of the border, doctors will also begin doing a boominb business in Canada providing abortions, because within a year I expect it to be illegal to perform them, just as it is in some Central American Countries.

Hi Jackie...False equivalence is a huge problem and getting worse by the day. Most in the media don’t seem to realize that the traditional journalistic “balance” doesn’t work in the age of Trump and only serves to normalize misogyny, bigotry, and violence. But we shall see, the mid term elections will either be a new beginning or the beginning of the end....

Hi lagatta...yes it’s stunning how the hatred Trump has been whipping up is starting to explode all over the place. What that Nazi did in that synagogue was horrifying, and it also reminded me of that mosque massacre in Quebec City. And BTW, the pipe bomber was also a crazed homophobe, who used to tell people he wished he could put all the gays and the Democrats on an island, and nuke them all. I fear that many Canadians won’t understand that they same thing could happen here until it’s too late...

Hi Steve...I’ve never seen that movie, but I agree that graphic of Trump is great. Remind me to...um..borrow it...😉

Hi e.a.f...I agree with you. I remember how once upon a time we were told we had to understand the so-called deplorable, because they were just the unfortunate victims of globalism etc etc. But I never believed that. I was willing to accept that globalism had made their lives more miserable, but nothing could excuse the way they were behaving, or that they could choose a billionaire globalist to be their president. And I’m afraid you’re right, this isn’t over by a long shot. And unless Trump and his Republicans can be neutered in the mid term elections, the horror can only get worse...