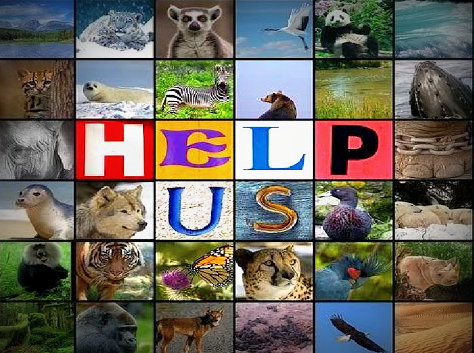 If the animals who share this planet with us could send us a message, it would be that one.

But is it already too late?

For at the rate we naked apes are going, there soon won't be many of them left. 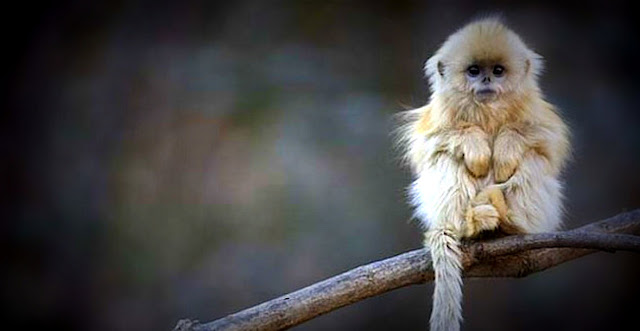 And this couldn't be more depressing.

Humanity has wiped out 60% of mammals, birds, fish and reptiles since 1970, leading the world’s foremost experts to warn that the annihilation of wildlife is now an emergency that threatens civilisation.

So many creatures we once shared the world with gone in such a short time.

“We are sleepwalking towards the edge of a cliff” said Mike Barrett, executive director of science and conservation at WWF. “If there was a 60% decline in the human population, that would be equivalent to emptying North America, South America, Africa, Europe, China and Oceania. That is the scale of what we have done.”

While we focus on what climate change could do to us, ignore what we are doing to them.

The biggest cause of wildlife losses is the destruction of natural habitats, much of it to create farmland. Three-quarters of all land on Earth is now significantly affected by human activities. Killing for food is the next biggest cause – 300 mammal species are being eaten into extinction – while the oceans are massively overfished, with more than half now being industrially fished.

While failing to realize that we are only killing ourselves.

“Nature contributes to human wellbeing culturally and spiritually, as well as through the critical production of food, clean water, and energy, and through regulating the Earth’s climate, pollution, pollination and floods,” he said. “The Living Planet report clearly demonstrates that human activities are destroying nature at an unacceptable rate, threatening the wellbeing of current and future generations.”

And this at a time when Jair Bolsonaro, the new fascist leader of Brazil, is threatening an all out assault on the already battered biodiversity of the Amazon. 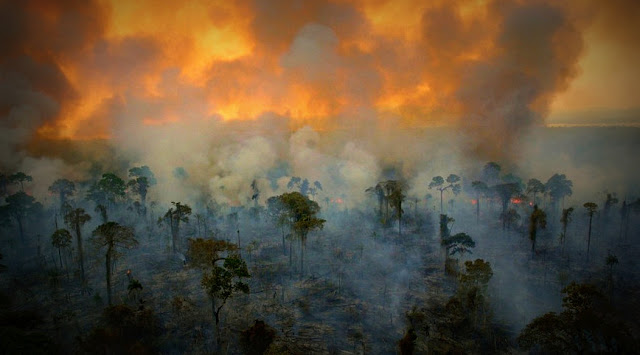 Mr. Bolsonaro — who once said that Brazil’s environmental policy is “suffocating the country” and on Sunday triumphed in the national election — has promised to champion his country’s powerful agribusiness sector, which seeks to open up more forest to produce the beef and soy that the world demands.

Mr. Bolsonaro has said he would scrap the Environment Ministry, which is mandated to protect the environment, and instead fold it into the Agriculture Ministry, which tends to favor the interests of those who would convert forests into farmland.

He has dismissed the idea of setting aside forest land for native Brazilians who have lived in the Amazon for centuries, promising that “there won’t be a square centimeter demarcated as an indigenous reserve” under his leadership.

Can our greedy species handle the challenge of climate change and biodiversity at the same time?

I think we can, but the challenge is the same:

Tanya Steele, chief executive at WWF, said: “We are the first generation to know we are destroying our planet and the last one that can do anything about it.” 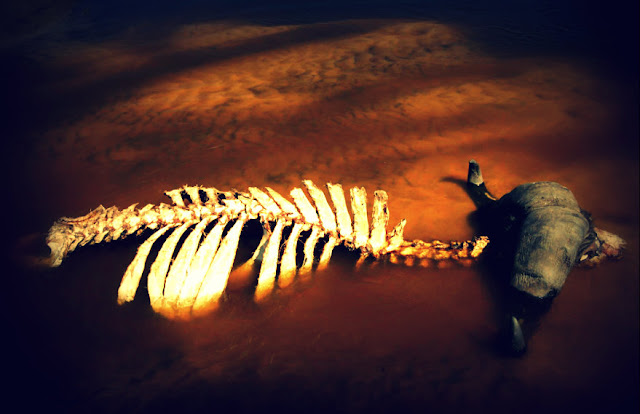 I am gobsmacked by the destruction of the bee colonies. Without pollination we starve. Yet even something with such a direct linkage has faced only footdragging so far. I have come to appreciate even the simple mosquito as a part of the eco system that we should not mess with.

A few days ago I saw this beautiful photo of tigers. How can we exterminate such a wonderful creature.

The idea that big game hunting in Texas can save exotic animals may be an anathema to some, but for me its thinking outside the box. Oh yeah and today the Chinese decided to remove protections for Tigers and Elephants, cause you know it was bad for biz.

"There won’t be a square centimeter demarcated as an indigenous reserve”. Oooh good idea. We should do the same.

Another Trump wannabe joins the ranks of the douchebag leaders.
This half-wit may think stripping the rainforest will lead to countless jobs but the result will be millions of acres of farmland parched from little or no rainfall. No trees, no rain.
JD

Thank goodness Norway has pledged $550M to buy land in other countries to preserve it.

We have a trump and a b trump. the b trump would appear to have a real hate on for Indigenous people. One can expect civil war if he goes ahead with his plans to wipe out the amazon.

It is startling to see the figure. Its huge, its depressing. How will my friends' grandchild live to adulthood? The people of brazil have made a decision, which they may come to regret because their new President isn't going to bring lower crime, just more murder. Other countries around the world, who all depend upon the rain forest will also regret what is going on. Perhaps its time to have a go fund me page for buying an acre or two in Brazil.

Can we stop it? Perhaps but not until we choose leaders who can find a path other than the pursuit of perpetual exponential growth. Every Canadian prime minister, Conservative and Liberal, has put economic growth at the top of their priorities. That includes the current prime minister. Their policies guarantee that, within our lifetimes, we will witness the start of the 6th mass extinction. Did you notice in the report that, if we were to stop our predations today, it will still take between 5-7 million years for the natural world to recover? Many years ago the renowned scientist behind the Gaia theory, James Lovelock, stated that our only hope for averting a civilization-ending calamity rested on what he termed "sustainable retreat." We have to grow smaller, much smaller, in our global population, in our demand for resources and in the waste we produce. That means shrinking the economy until it is safely within the bounds of the environment. That should be obvious but it plainly has not occurred to Andrew Scheer or Justin Trudeau just as it would have been scoffed at by Stephen Harper or Jean Chretien.

Trump's sons are wildlife poachers. I saw an article on CBC the other day about a pair of beautiful and rare albino moose being spotted in Ontario. Not long ago, Trump Jr. reportedly "slipped out of view" of the secret service to go on a questionably legal moose hunt in Canada, as if to dare Trudeau to throw him out. All the more reason I've wanted the GOP to be made to change their mascot to something else other than the beleaguered elephant: they're endangered gentle giants who face a threat from Greedy Oppressive People rather than being the alpha predators themselves.

I grew up in a huntin and fishin environment. There was nothing wrong in my eyes because that was food. But to kill and animal just to kill, well thats how serial killers start.

what you say is absolutely true and considered crazy talk by the mainstream. Like crackheads stealing alloy bikes worth thousands and selling them for five dollars we are addicted.

Not to mention the beautiful cats they have killed on African safaris...

Whether it has occurred to Trudeau or not is secondary to the fact that Canada is not a "basic dictatorship," and he would have his head on a pike if he didn't prioritize the wallets of the voters. He needs to do whatever is necessary to remain in office, or Scheer and the Conservatives would be far worse for not only Canada's people, but its environment as well.

Democracy appears incompatible with the kind of radical environmental action needed to halt or reverse this course. This is called the tragedy of the commons. Per the dramatic speech in the movie Network, the world is a business. Even the "communist" Chinese have been seduced by market economics. There would be riots if Trudeau declared himself a green socialist and said we're going to have to make some financial sacrifices for the good of Mother Earth. Collective action on that scale just doesn't seem to be in the human -- certainly Western -- DNA.

The most that he or a Democratic US president can do is offer voluntary incentives like carbon pricing and recycling initiatives. He can't throw the CEO of Kinder Morgan in a dungeon or send in the troops to confiscate every fuel-burning vehicle. He's certainly not going to implement a one-child policy. People need to come together, people need to care. But self-interest more often than not takes hold, and that's how "coal country" gave us Trump and Oilberta is probably going to vote in Kenney.

Hence... it's humanity's war, and even the better angels of humanity aren't immune. Trudeau's not a Care Bear or an ethereal being. He's not perfect, but he's infinitely better than the Conservatives would be. But he's also subject to the often irrational whim of the voting public. Even he wrote in his book about how, as a child, he first started to understand the nature of his father's job: "He's not the boss of Canada ... his boss is the people of Canada." If the people of Canada don't want to give up driving, running air-conditioners and space heaters, "identifying" as tough, manly oil riggers, or buying plastic junk and electronics this holiday season, there's only so much he can do.

Hi JD...exactly, the burning of the rainforest has already affected rain patterns. Brazil’s largest city, São Paulo , almost ran out of water. And to make matters even worse, the fascist Bolsonaro also wants to go after the shy uncontacted tribes who live in the rainforest, and that could lead to genocide. The man is an absolute nightmare for Brazil and the planet...

Hi e.a.f...Bolsonaro’s election is a devastating blow. I love Brazil and I can’t believe what’s happening there. Just like I can’t believe what.s happening in Ontario with Drug Fraud. I visited Brazil several times when my parents were posted there, I did the tourist tour of the Amazon, so I’ll try to write something as soon as I get some time...

Hi anon 3:03 PM...what you say is true. Our leaders need to be bolder and get off the idea of perpetual exponential growth. But Jackie is right too, unless you can get the public to support that bold new agenda you will get nowhere. There are more than 25 million cars in Canada, and just getting Canadians out of them will be a huge challenge. The pressure for change will have to come from the bottom before it will come from the top. See you at the barricades...🏝

Hi Jackie...I saw that video of that beautiful albino moose, and all I could think of was how is that beauty going to evade the gangs of hunters that descend on the forests every year. And as for Trump’s sons posing with beautiful animals killed for no reason it makes me sick. If they love animals people should stalk them with a camera....

Hi Steve...I agree, hunting animals for food is one thing, hunting them for the “joy” of killing is an abomination. And I must admit I could not do either...

Hi lagatta....I can’t even watch any of those hunting shows on TV, and when I see some human posing next to some gentle creature like a giraffe that they have just killed, it makes my blood boil...