How To March Out Of The Darkness of Trump's America 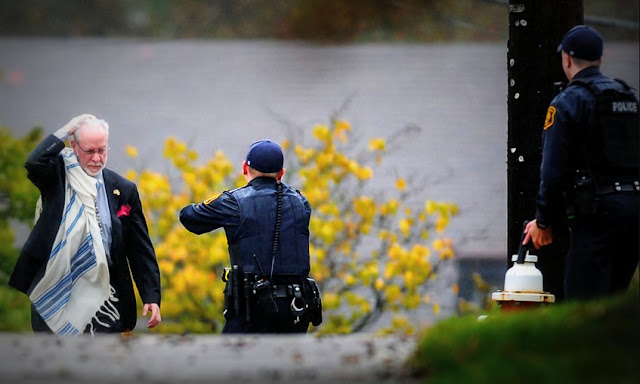 Another day in Trump's America. Another horrible massacre of the innocent.

Brought to you this time by this Nazi loser.

So soon after another loser was caught mailing pipe bombs all over the place.

And although both cases are different,  I hold Trump responsible for both of them. 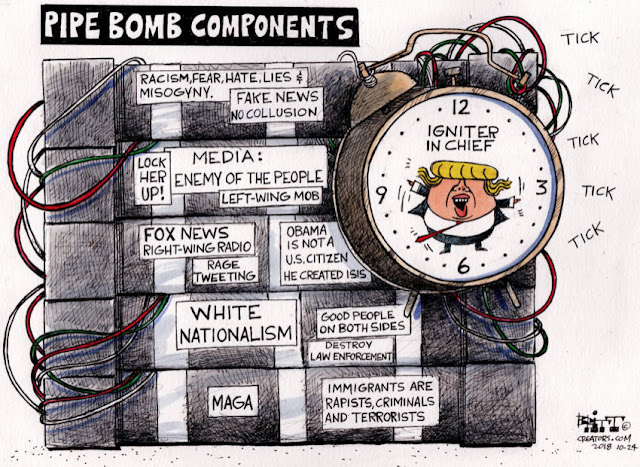 For having created the conditions where violent hate can thrive.

And yes, how far have our poor neighbours fallen from the days when they had a real president. 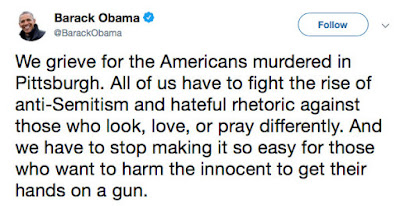 A president for all Americans.

Unlike this one who has no class, no empathy, and just doesn't get it. 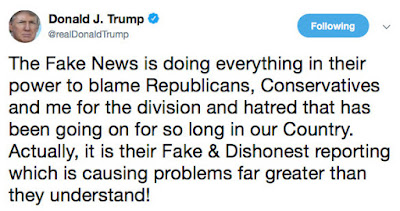 Or does and is the fascist I always knew he was.

But then I'm a Canadian, and I can hardly lecture Americans when we have Nazis in this country.

So today I think I'll just let Jim Carrey speak for me in a series of illustrated tweets in no particular order:

The monster is out of control. Vote for your lives! https://t.co/NrLGWEFBsI pic.twitter.com/44EbIccN4s
— Jim Carrey (@JimCarrey) September 26, 2018

From the bowels of the White House he shrieked, hurled curses and tweeted bile — because that's what demons do. YOU are the Exorcist. Vote Democrat for goodness' sake. https://t.co/EphA7EosbP pic.twitter.com/riVcX0PHCH
— Jim Carrey (@JimCarrey) October 13, 2018

Today they tried to murder two Presidents as well as public servants and journalists. Make no mistake, these terrorists were encouraged and emboldened by the hate speech of Donald Trump. If you can’t see the clear menace of this man’s influence by now then you are a part of it. pic.twitter.com/L7kYcpcPKO
— Jim Carrey (@JimCarrey) October 24, 2018


And end with the drawing I like the best.

The one with this caption:

Be there in November. Sunshine dead ahead... 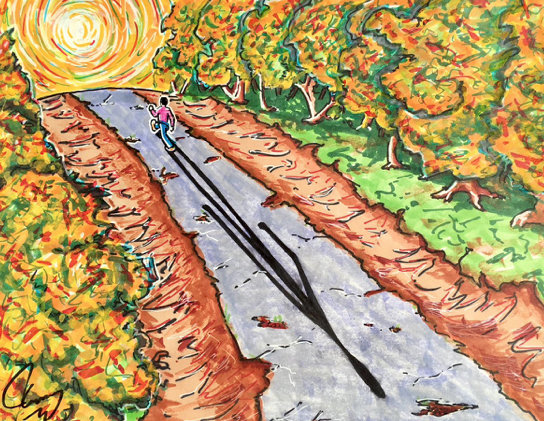 In just over a week, decent Americans will have their first chance to strike a major blow against the monstrous Trump regime.

And since I have been marching towards the sunshine since I was about fourteen, fighting bigots as hard as I can.

In this fascist darkness, my hopes are riding with them..

Please don't forget the hater in Kentucky who murdered two Black seniors as they were shopping - one was a gradfather with his grandson, to buy supplies for a school project, as the hater was unable to barge into a historically Black church with the same intent - one can fairly presume - as the Synagogue murderer. All of this was within 72 hours, and three different hatefu perps.

I love Jim Carrey's drawings. He's such a talented comedian and he really hates Trump. What more can you ask for?

The First Amendment is an anachronistic anomaly of an ossified constitution, written by propertied white male slave owners who've been unjustly deified by right-wing jingoists drunk on the mythology of American exceptionalism. It makes us a pariah in the eyes of our betters. Even saying that there are countries that do things better, or that there are things we need to address to bring us more in line with the rest of the world, makes the exceptionalists "trigger happy." I don't care anymore. If it was up to me, people who publish racist material like this guy did on "Gab" (aka Twitter for racists, as though Twitter wasn't enough of a cesspool as it is) would be arrested and treated like child pornographers. Free speech is not absolute, and penalties for stochastic terrorism need to be added to the letter of the law.

That would land Trump behind bars as well as the rest of his Klan party of Lee Atwater dog-whistlers and blatant, unapologetic bigots of the Steve King and Ron DeSantis variety. Plus the assholes who hide behind a warped and selective interpretation of religious scriptures to justify everything from slavery apologia to homophobia/transphobia and the oppression of women. Or, for that matter, the oppression of people who don't use their religion for malicious purposes and are just minding their own business and contributing positively to society, like women who wear hijab or the victims in this synagogue massacre or the Mother Emanuel attack.

I'm done giving these bigots the benefit of the doubt or "respecting their constitutional freedoms" to spew hate and hoard weapons arsenals. The feds go after copyright violations on file sharing websites with more intensity than they do neo-Nazi forums and other rampant bigots. Free speech my ass. The "free market of ideas" needs an invisible hand of central planning that swats down hate material with the power of a thousand Karl Popper volumes. The "rights" of bigots end where decent people's dignity begins.

And the Second Amendment is utter shit that needs to be "repealed and replaced" with a Prohibition amendment that confiscates and melts down every last gun and uses the metal to build a memorial to gun violence. The 1A provides the ammo; the 2A pulls the trigger. The U.S. is more than the sick man of Western civilization. It's patient zero and it's infecting the rest of the world.

The synagogue attack, meanwhile, took place in what was literally Mister Rogers' Neighborhood. I'm so sorry that Canada has to be neighbors with, as Robin Williams said, the meth lab downstairs. I wish we could be better neighbors, but we have an abusive slumlord and abusive tenants who elected him president of the homeowners' association because they didn't like that his predecessor was too melanin-rich for their liking. Plus, they keep voting for equally abusive secondary officials at the HOA, and rewriting the rules so that the rest of us don't get to have as much of a say in making the neighborhood a nicer place to live.

A Jewish concept defined by acts of kindness performed to perfect or repair the world. The phrase is found in the Mishnah, a body of classical rabbinic teachings. It is often used when discussing issues of social policy, insuring a safeguard to those who may be at a disadvantage.

I hope we can get some soon but I'm not so sure anymore. And again I'm sorry and wish better things to our neighbors, especially your PM whose mission in life clearly is repairing the world, and who has been treated so atrociously by the abusive slumlord-in-chief. Here's Mr. Rogers talking about repairing the world in his last recorded video -- for the first anniversary of 9/11 -- filmed shortly before he died. Good Americans deserve better and good Canadians do too.

Trump is just a recent event. This kind of thing goes back to the 1960. Does he make it more better yes. However if you compare statistics he has not made it worse.

Time will tell he fans the flames of hatred everyday, will they blow his way
or burn that wig off his head?

I remember during the Harper years when you wrote that we would come out of the darkness and into the light. I didn’t believe you then, but we did. So even though I sometimes think this nightmare will never end, I will believe you now. Thank you Simon.

Hi lagatta... I can’t keep up with all the hateful violence swirling around the United States. All I can do, like so many others, is denounce Trump for creating an atmosphere where hate can thrive. And like Jim Carrey encourage our neighbours to vote...

Hi Jackie...I found the name Squirrel Hill charming, and to find out that it’s also Mr Roger’s Neighbourhood makes it even it more poignant. And it also reminds me that I would not swap our American neighbours for anything. Despite all the problems and the violence, I choose to see all the good things, and all the good people like you. My grandfather was attached to the U.S. Navy during the war to learn how to fly the latest Corsair fighters, and he never lost his love for your country despite all the distressing things that happened, and the disappearance of sofa fountains. We will survive this time and celebrate together...

Hi anon...I don’t know what more you can ask for? I’m sorry he’s no longer a Canadian citizen, but the way he is using drawings to attack Trump is absolutely brilliant...

Hi Jackie...the way the second amendment has come to be seen by so many as the 11th Commandment is something I’ll never understand. There is a Scottish town called Dunblane not too far from Glasgow where years ago some maniac murdered 16 primary school children and a teacher before killing himself. And every time my train stops in its station I think of what happened in that town, and give thanks that the deaths of all those innocent people led Britain to impose strict gun controls that forever changed that the UK. Unfortunately that has still to happen in the U.S, and with so many weapons out there I despair that it ever will..

Hi Steve..it’s true that the U.s. has been a violent society for a long time. But no president has ever fanned the flames like Trump has, and that’s what makes the situation so scary. As wild as it may sound I don’t think anyone can rule out another civil war. And should that happen Canada would not be able to avoid the horror that would ensue...

Hi anon...thank you for being such a faithful reader. The Harper years were the worst years of my life, and I had to hold on to my faith in this country with both hands. But I could never give up, life without hope is death. Harper went down and so will Trump and Scheer and all the other rotten Cons...

Hi RT...although the situation in the world is as dark as I can remember, it is making the situation we are in clearer than ever. Now the choice is clear, progressives are on the side of human survival, and the Cons can only lead us to extinction. And for that I will be eternally grateful...