The Sad Saga of Mother Canada and Jesus Harper 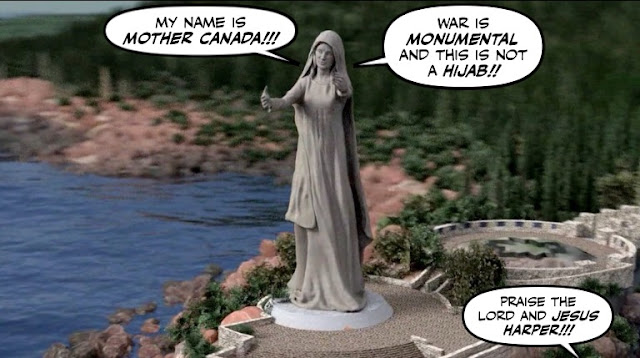 As you may know a Toronto businessman wants to build a massive statue called Mother Canada in Cape Breton Highlands National Park.

And although it is a private initiative, the foundation he created is now looking for public money.

Even though polls show most Canadians hate the idea.

And most of the reviews have been brutal.

There are many patriotic reasons to reject the grotesque Mother Canada monument being proposed for a rocky outcrop along the shores of Cape Breton Highlands National Park. The most persuasive is that this towering Colossus of Wars, meant to memorialize Canada’s military dead through the image of a shrouded, beckoning female figure, should never be imposed on a national park.

And I mean BRUTAL.

And that brings us to the third, conclusive reason why Mother Canada shouldn’t exist – it’s offensively tasteless at the aesthetic level. The bigger-is-better approach to art is best left to Stalinist tyrants, theme-park entrepreneurs and insecure municipalities hoping to waylay bored drive-by tourists.

And even though many have said it looks more like a monument to Stephen Harper and the Con regime...

Rather like the monstrous monument Great Leader wants to build to himself in the heart of Ottawa... 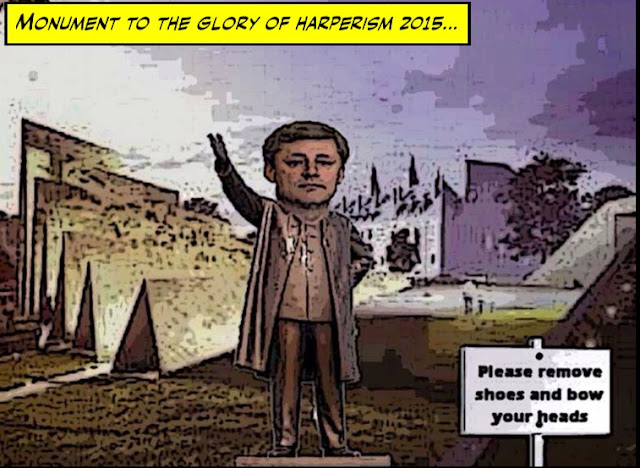 And I'm sure you know how I feel about that... 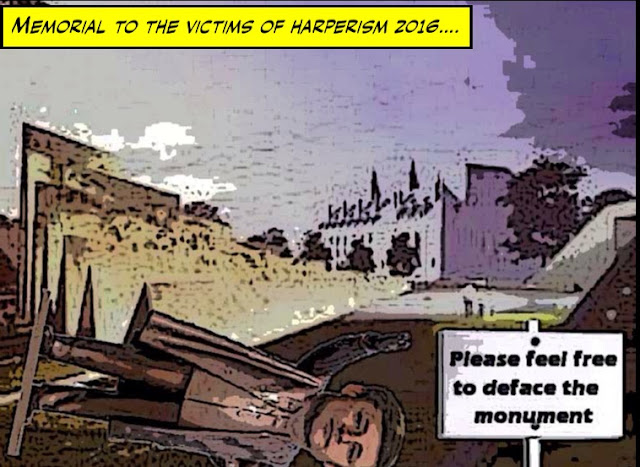 The Calgary Herald seems to think the Mother Canada statue it's worth every dollar of OUR money, and is now reaping an unholy backlash.

The Calgary Herald published an editorial on Thursday defending the use of public money to build the controversial eight-storey Mother Canada statue. The reaction on Twitter? Fine — take her.

If they feel that strongly about this, they should show their love of the troops by building this darned thing in Banff or along the Bow River," said Trevor Adams, senior editor of Halifax Magazine.

And as you can see the reaction on Twitter has been...um...less than supportive.


But although I also hate the idea of building such a hideous monument to war in a beautiful national park, I am a Canadian eh?

So I'm always looking for ways to reconcile our differences.

And since some people are clearly in favour of building that statue.

And our Great Leader is now calling himself Jesus Harper.

Wouldn't this be a good compromise?

But we have to remember Harper and his Cons with SOMETHING.

And they were monstrous.

So I can't help feeling it would be only too fitting...

This article is a keeper!

In December 2012, environmental oversight was reduced by changes proposed by the pipeline industry to the Navigable Waters Protection Act.

Canada became the only country to withdraw from the UN anti-drought convention in March 2013.

NEW OCTOBER 2014: A report from Canada’s Environment Commissioner found that the federal government lacks clear guidelines about environmental assessment requirements, stating a concern that “some significant projects may not be assessed.”

NEW OCTOBER 2014: The same report revealed that a draft of emissions regulations for the oil and gas sector promised in 2006 – and crucial to meeting fast-approaching reduction targets – has been ready for a year, but no public consultation has taken place. The bulk of consultation so far has been with industry and one province (three guesses which one...).

The Mi'kmaq people are also opposing this insult to their Native Land:
http://thechronicleherald.ca/novascotia/1297889-statue-would-chip-away-at-mi%E2%80%99kmaq-culture-expert-says

hi lagatta...I'm glad to hear that the Mi'kmaq are against it, it really is a monstrosity. And what makes it even worse if you look at the plans, is that it resembles some sort of religious site, with the stations of memory reminding me of the stations of the cross. And besides as e.a.f. points out why should only mothers mourn their lost sons, and why should women be portrayed as only mothers when our armed forces is now made up of both sexes. Let's hope this idea goes nowhere...

hi Noah...yes I thought the Globe editorialists summed up that one nicely. And yes it does apply to Stephen Harper's travelling circus...

hi e.a.f.... yes good point, why not fathers and sisters and brothers or lovers? This is another vanity project by some millionaire, and it has no place in a beautiful national park....