The Humiliation of Stephen Harper 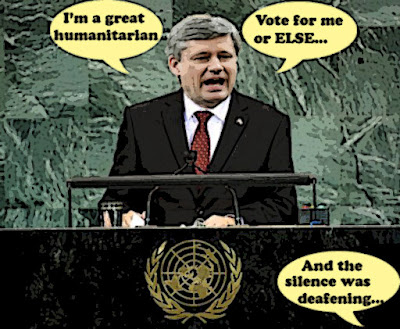 If anyone needed more evidence that Stephen Harper is losing touch with reality, all you had to do was watch him at the United Nations today.

On Harper’s watch our foreign policy has, in truth, been less UN-focused, more Washington-centric and more muted. We’ve gained an unwelcome reputation at the UN for shirking on climate change, being erratic on human rights, less balanced on the Mideast, and indifferent to peacekeeping and disarmament. And we’re freezing aid.

After years of living by the Big Lie he must have thought he could fool delegates into believing that he shares their ideals.

When in fact he is a twisted, mentally unbalanced  freak who puts his foul ideology before the lives of suffering people. A cruel heartless psycho who enjoys the pain of others.

A man who wants a seat on the Security Council, for the same reason he wanted to be Prime Minister of a Canadian government. So he can rip out its guts with his teeth, and change it beyond recognition.

Sadly he has fooled a lot of Canadians, and because of that this country is a shadow of the great place it once was. But he wasn't able to fool the U.N. delegates, and they made clear what they thought of him.

By voting with their feet. 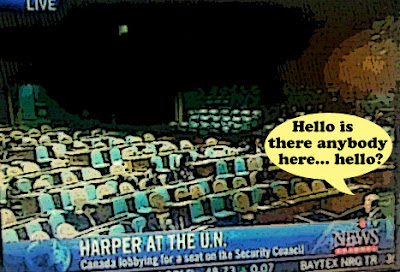 So in a place where Canada could reasonably expect to be honoured, thanks to the work of previous governments, never was a Canadian Prime Minister so publicly humiliated.

And I mean HUMILIATED. Even the little rat Ahmadinejad had a bigger audience. The only way the delegates could have humiliated Harper even more than they did,  was if they had pelted him with eggs and tomatoes, or asked him to drop his drawers, and do a lap dance for them.

The good news? He must have seen all those empty seats, and it really must have HURT. I bet when it was over his flunkies had to massage his battered ego, and his chunky buttocks, all the way back to Ottawa.

Gawd. You know I've always believed that when we finally get rid of this evil bully, he would find a new career as a televangelist.

But after seeing the way he lied and shilled before the United Nations today. Only to get kicked in the teeth.

And told to get outta here you LOSER.

Now I think he's better suited for this kind of job...

Hey chop me another one.

I don't know why so many Canadians are into him when the rest of the world just isn't.

It's testimony to his disconnect from reality that he expects an institution he's denigrated and damaged for years is going to reward him with a promotion to the Security Council.

Obviously, with such a seat, harper would just be a total suck-up to the most extreme US-impositions.

I wonder if the US delegate bothered to stay for his ravings?

I love that our loser leader was speaking to no one!!

What a joke we have become to the rest of the world.

I'd laugh if I wasn't so mad and embarrassed :(

Talk about leaving the room! Prentice was at an environmental
conference in South Asia and most of the delegates walked out when he started to speak.

It's a new habit the international community has adopted and it's been spreading since the election in 2006. Just like the Americans when Cuba addresses the UN.