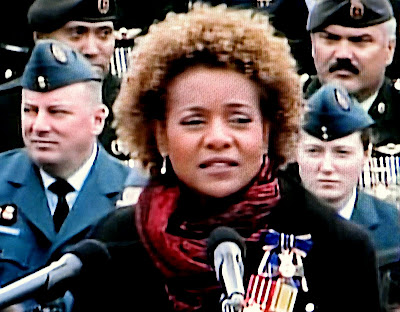 I turned on the TV today to watch Question Period, only to be confronted instead with the sight of Michaelle Jean bidding a tearful farewell to the troops.

And it seemed so fitting. Because she was always a ridiculous chickenhawk, but she was no help to Canadian democracy.

I had such high hopes when she was appointed. She was smart, black, and glamorous.  But her role in demolishing the Great Canadian Coalition, destroyed those hopes, and has almost destroyed our country.

I want to give her the benefit of the doubt, now that I've heard her side of the story.

I think it was a labour of raising awareness and raising also the responsibility of being well informed and of making the effort to learn about our political system. Because there’s going to be before and after. History will judge. But I think that everything that I anticipated happened. And this was part of my thoughts.

But I just can't. The truth is she should not have allowed Stephen Harper to prorogue Parliament. Our system of government allows for the formation of a coalition. She could have helped educate Canadians about that simple democratic fact.

But by caving in to the Cons she betrayed her own people, left the country in the hands of maniacs. And allowed Stephen Harper to keep wielding the "threat" of a coalition as a weapon to attack the decent progressive parties of this nation.

The damage that has been done to Canada since that decision can never be properly quantified. It's too enormous and shattering.  But her legacy will not have to await the judgement of history. Because it's already in.

When we needed her the most she let us down. She was nothing but a Con tool.

And history will never forgive her... 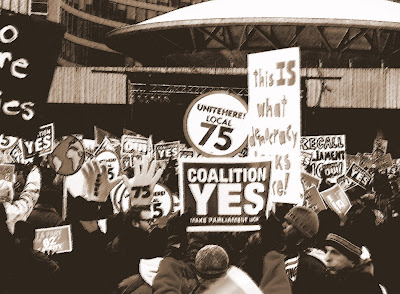 It's not just Canada she hurt. I believe the president she created also applies to a countries that use the Westminster system of government.

I share your disappointment about her decision and I find her explanation thoughtful but a bit weak. That was a fairly subtle message being sent. However I think you are too harsh on her. Not on her in particular but on the position of the GG. It would have been the right answer to say no to Harper's request but it still would have been a very difficult decision and one with little precedent. Her only crime is taking the slightly safer route when faced with two very difficult choices while remaining nonpartisan. I think reading between some of the lines of her statement she actually would be in complete agreement with you, perhaps we'll find out someday. But the lion's share of the blame for how Canada is being damaged rests squarely Harper and those who support him. A not insignificant part also lies with the the Liberals and NDP who have not been able to provide a clear alternative and get past their differences to do what Canadians clearly want them to do, which is work together. The voters have spoken multiple times now and do not want any one party to have all the power, so they will have to learn how to share and stand up to the fearmongering of the Conservatives that such cooperation is stealing the election.

Bah, history already forgave her. That's why she was chosen. ;)

Totally agree with you. Glad she is gone --- spineless supermodel wannabe. She had tons of potential, and flushed it all away.

Totally agree with you, Simon.

Instead of standing up for the majority of voters who were represented by the opposition leaders who had expressed a loss of confidence in Harper, she allowed Harper to prorogue Parliament. It was inconceivable that she could have allowed him to escape facing the House by proroguing Parliament. Here are some very powerful words by Andrew Heard, a Constitutional expert and Professor (Simon Fraser): "On balance, it appears that the Governor
General failed to defend Canadian parliamentary
democracy and opened the door
to repeated abuses of power by future prime
ministers." These words appeared in a detailed analysis of the prorogation that can be seen at this link: http://www.law.ualberta.ca/centres/ccs/uploads/PointsofView7.pdf

Now she has the audacity to suggest that her delaying the prorogation decision by 2 hours somehow is educating voters on democracy.

She might have done well on some issues (e.g. Haiti) but she was a huge disappointment in her day-job as GG in representing the majority of voters who did not vote Conservative.

hi doconnor... I hadn't thought of that but I suppose you're right. Helped the cause of those who would turn parliamentary systems into presidential ones. Although on the bright side the recent British experience has only proven how crazy Harper is, and how wrong she was...

Hi popthestack...I don't disagree with you about how the Harper government and its supporters are mostly to blame. I have always encouraged the Liberals and the NDP to work together. And I realize that Jean was under enormous pressure. So I really hate being so harsh on her. I just found out that the Cons were planning to go over her head to the Queen herself. But I honestly don't think that I am being any harsher than the verdict of history will be. When people in positions of power find themselves in situations of crisis, with no easy guide to help them, what they do in that lonely moment determines whether they will be known as great people or not. Jean was sweet, she did some good things, but great she was not...

hi prin... no no you're wrong. I might forgive her some day, long after Harper has been ousted. Because I'm a softie eh? ;)
But history NEVER will...

hi Brahm...I'm sorry to say I'm glad she's gone too. As I said in my post I was so happy when she was appointed, so she could help make the rest of the world think we're cool and glamorous. As fraudulent as that may be. ;)
But the truth is if she had done the right thing, the Harperites would have been out of power, and this country would have been spared from most of its ugly reign.
So I give her two points for biting the seal's heart, but none for saving our country's soul...

"On balance, it appears that the Governor General failed to defend Canadian parliamentary democracy and opened the door to repeated abuses of power by future prime ministers."

Yup.You can't say it more succinctly than that. As I told the others I'm sorry about that because I was one of her supporters. But nothing in Canadian politics has disappointed me more than her decision to let Harper get away with murder. So she's a disappointment too. Now I'm just hoping she can help the poor people of Haiti more than she helped us...

"I just found out that the Cons were planning to go over her head to the Queen herself."

I doubt they would have any more luck then I did.

The prorogation decision isn't the only one I disagreed with. I also thought she shouldn't have allowed Harper to call an election is defiance of the election law that had been duly passed by Parliament.

I for one will NEVER forgive her! She let us down when we needed her the most. She just didn't 'get' what her true role was when the chips were down. Instead she opted to sell out our democracy so she could keep her cushy residence and position.

She is a FAILURE. She escaped a country of tyranny and she comes here and lets our democracy be thwarted? That makes her even more of a disgust to me.

If we never hear another word from her that would suit me just fine. Martin made a very poor choice and now Canada is weakened and in serious trouble because of her.

@dconnor: Thanks for sharing your reply from the Queen.

I sent a letter to the GG requesting strongly, but very very politely (addressing her repeatedly as the Honorable, etc.) that she send her PM back to face the House and the elected representatives of the people she is deemed to be protecting.

All I got was an automated reply acknowledging receipt of my letter but no reply from Michaelle Jean. No nice words placating me (after all, I am paying her salary) as to why or how hard it was to make her decision.

She should now at least apare us the tears and the spin, eh?

hi doconnor...Lordy. You sent a letter to her Majesty. Now I'm impressed and humbled. :)
Seriously... good for you. I still think Harper and his gang were so desperate they were capable of anything. But as I wrote in a post tonight they didn't have to because they found a better way to get Jean to surrender...

hi anonymous...as I told the others I had high hopes for Jean, but the objective fact is she knew what Harper was doing, and how he had acted, and her decision to prop him up has cost this country so much of what we considered precious. So I know how you feel. She had a chance to be great and she blew it.
And thanks for liking my little blog.
That's very encouraging, and I'll try to do better... :)

hi anonymous (1 pm)... And you sent a letter to the Governor General? Jesus in a tortilla, thanks for making me feel even more useless. ;)
Seriously though... good for you too.
Somebody has to hold these people accountable. And you have every reason to be annoyed. So much for the people's Governor General...

You're a fool Simon.

What you, and apparently the rest of the Country missed is that the Governor General had no choice.

Governor General's have refused Prime Ministers before, like during the King-Byng affair and other cases throughout the Commonwealth. Also, people who understand how out system works knows it is a legitimate option.

It is up to the House to choose a Prime Minister. It was by agreeing to the prorogation SHE was making the choice for us and taking away choice from the people's representatives. She wouldn't have been choosing Dion. It would have been up to the House, as shown by the fact that the NDP was considering asking for someone else to be Prime Minister.