The Skateboarder, the Koran, and the Nuclear Wingnut 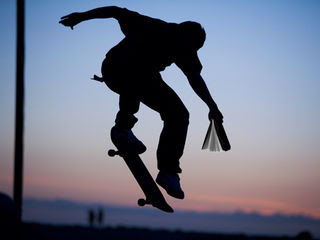 The good news. A religious wingnut in Texas tries to burn a Koran, but is foiled by a skateboarder...

"I snuck up behind him and took his Koran, he said something about burning the Koran, I said 'Dude you have no Koran,' and ran off."

The wingnut works at a nuclear bomb facility.

But then that's the story of America these days eh?

Good news is hard to find. The Empire is collapsing.

And the madness is spreading...
Posted by Simon at 4:33 AM

And it may spread to Canada, too.

I was going to say, "Skateboarders are always rad," but that guy was just weird. :D

hi Torontonian...because we are so close to the United States I think that we sometimes miss the big picture.The American are struggling to adapt to the hard fact that they are practically broke, and they don't call the shots anymore. Their legions are fighting in the outposts of the empire and it all sounds so familiar.
But unfortunately the repercussions for us could be huge, and the madness is leaking across the border. However I'm all in favour of a Teabagger's Party to take votes away from the Cons... :)

hi prin...well most of the skateboarders I know are idiots, and that one was from Amarillo, Texas.Ahem.
But I was quite impressed that all those other people put their hands on the gas soaked book to prevent it from being set alight.
And I did like the "Dude you have no Koran" part... :)