The Humiliation of Ezra Levant 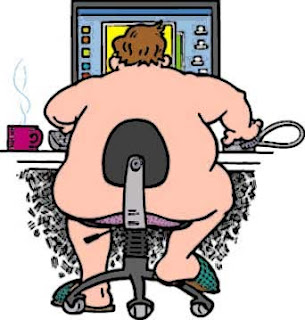 As you may or may not know, I have always tried to avoid reading anything written by Ezra Levant, for one very simple reason.

I've never been able to shake the horrible feeling that grubby bully writes a lot of his grotesque material without any clothes on.

And that's not a pretty thought eh?

So I have nothing really to add to what others have written about this grovelling apology.

Or for that matter nothing really to add to what I wrote last night before the good news broke.

Except for these footnotes:

(1) I no longer believe that Levant will be hired as a weatherman for Fox News North Sun TV. What a pity spitty.

(2) I'm now convinced that the Great Antonia is not only brilliant but psychic.

(3) I'm pretty sure Chris Selley and all the other semi-respectable members of the Levant Fan and Paypal Club must be feeling REALLY foolish stoopid.

Adding a new, politically incorrect voice to the Canadian media landscape is important business, too. I very much hope they succeed. So leave the shenanigans to Mr. Levant. He’s good at it.

(4) I wouldn't be surprised if the Levantine takes advantage of the situation, by wiggling his fat ass in the air, and begging his supporters to insert loonies, quarters, dimes, bus tokens into his ample orifice.

Because as we all know, in that regard he's capable of ANYTHING.

As for me, what with Fox News North dead as a dodo, Kory Teneycke heading for exile in Paraguay, and Ezra Levant on his knees grovelling for mercy.

And playing this happy tune.

Over and over again...

Golly. I don't want to look like I'm gloating eh?

But when you're a bully, and you smear people for NOTHING.

That's hardly an apology on the part of the Sun; it's merely a statement of fact. Moreover, the Sun is hardly a NEWSpaper. It's hardly birdcage liner.

Ezra Levant is hardly a commentator.

So what else is new?

The new news channel will go down in flames in short order--particularly now since so many people are disaffected with anything conservative.

I chatted with Kady O'Malley about the turmultuous week they had at Sun.

She seems to think that now that Peladeau is now rid of Kory, things should be a lot less chaotic. They appear to be in damage control mode. The "apology" and then giving Margaret Atwood space to publish her side of things.

As such, she doesn't believe that Ezzy will get his own show, as he is far too toxic, thus, a liability.

While they obviously want a right of center tv "news" tabloid styled station, they're going to be somewhat more careful these days about the business end of things and the talent they hire. Kady even ventured that the station may not even be as big c conservative as was originally planned.

As for Kory, whom she felt was a bad fit for his job from the start, will probably go back to the political scene, like punditry, which is a far better fit for him.

Yesterday, on Question Period, Craig Oliver pointed out what others have been saying; that a right wing "news" tabloid style station 24/7 will not work economically, unless they put in a few 'token' centered and even left of center shows with hosts of that political persuasion.

I've never been able to shake the horrible feeling that grubby bully writes a lot of his grotesque material without any clothes on.

This sort of comment is why I keep reading you, Simon! :)

hi Torontonian...I occasionally find some decent material in the Sun, it still has people like David Akin, and I do support a.... um.... frank exhange of views in the media. But who in their right mind would print such a vicious attack on Soros for the crime of supporting a group running a petition. Calling anyone a Nazi collaborator is always wrong. But calling someone who experienced the holocaust that is simply appalling.
You might be wrong about the last part though. If the Sun goes more mainstream it might actually help its chances of getting a license.
Now that it's not going to be Fox News North I don't really care...

hi ck...yeah I agree with Kady. I don't think that Quebecor appreciates that kind of publicity. If they gave the Levantine a live TV show they would have to put it on a fifty minute delay to give their lawyers time to bleep out the objectionable and libellous language.
As I said before it might actually be amusing.
For about ten minutes. But only if the audience was wearing party hats and blowing vuvuzelas... ;)

hi Dr Dawg...thanks I'm glad you enjoyed that one. I wish I didn't have to censor my words because I have a few other things I'd LOVE to say about Ezra... :)

If Sun TV news goes more mainstream, then it will be increasingly like CTV and CBC news networks--wouldn't it be?

Then we'd be at the Tweedle Dum Tweedle Dee situation with a new addition--Dum Dum.

More of the same but only different.

hi Torontonian...yes you're right. But that's why I don't think this application will go anywhere. It seems to me the news channel universe in this country is already dividing a small pie. Sun TV doesn't have the resources to compete with the others. So even if it does get a license my guess it won't last long. One Ezra lawsuit and they'd have to layoff half their staff. Poor David Akin one can only hope he can turn this ghastly experience into some kind of book... :)