Stephen Harper and the Conzilla Show 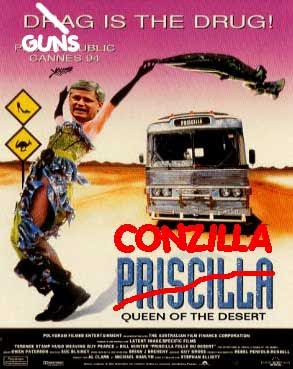 Gawd. When will somebody give this ghastly Conzilla Show the hook? When will Stephen Harper stop pretending he's a gun nutter and a country boy?

Prime Minister Stephen Harper says the federal long-gun registry will someday be scrapped, regardless of what happens to a Tory backbencher's bill on the issue when Parliament returns next week.

"Opposition to it has not diminished; it has only increased," he said.

When in fact he's just a ridiculous nerd from the suburban desert of Toronto.

And a pathetic freak with multiple personalities, who doesn't know what he's talking about.

And can't read the writing on the wall. The Cons are going nowhere. And the country is getting tired of him.

You can only pit Canadians against Canadians for so long, before people realize what he's trying to do to this country. And that he's not all there. 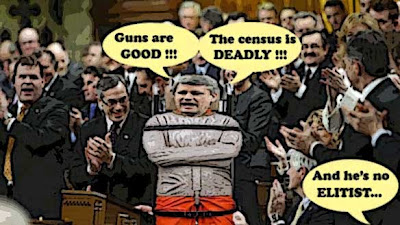 The pressure on his ....um....troubled mind can only increase as the economy sours.

And the Auditor General  report on the corrupt Porky Action Plan comes home to roost.

Which is why I'm so excited about the return of Parliament eh?

Michael Ignatieff and Jack Layton are both looking good. While Stephen Harper is looking like a palooka getting ready to kiss the canvas.

Are you ready for some PAYBACK?

Are you ready for a REBELLION?

Okay my favorite gay writer, I'm coming from a different point of reference, have you considered that it could be "Con of the Dead"?

Sorry, about the above comment. You are one of my favourite writers. And gay, of course. I meant to embed the "Shaun of the Dead" trailer, but wasn't allowed. Instead of preview I hit post.

Not funny when I can't deliver the punchline.

hi anonymous...you don't have to apologize for calling me a gay writer. I'm really a writer who happens to be gay, but the gay part affects how I think of other stories, why I hate bullies and tyrants etc, so what the hell. My only regret is that I'm too straight for some gay people, and too gay for some straight people. But the way I see it if we don't fight to change the larger society we live in we'll all go down together.
As for Con of the Dead, or Shaun of the Dead I fear you may be right.
I'm pretty sure that Harper sleeps in a coffin, and Vic Toews in a crypt, but I'm going to have to monitor some of the others on the night of the next full moon... :)

My dear Simon, you are one of my favorite bloggers period! But I've told you this before.

If ONLY Harpie were into drag rather than "packing heat"! What was that great Australian film about the drag queens crossing the outback and little backwaters like Harper Country, but hot rather than cold .. Priscilla Queen of the Desert?

hi Pamela...thanks a lot. Keeping this little blog going with my schedule is getting harder and harder. But encouragement like that makes it easier. BTW don't feel bad about repeating yourself eh? I don't mind... :)

hi lagatta...the sad thing is he isn't either. Just a Great Pretender who will do ANYTHING for a majority.
Years ago he actually voted for the gun registry because his urban constituents made it clear that they overwhelmingly supported it. Harper is devoid of any morality and it's PATHETIC...