Stephen Harper and the Revenge of Bonhomme 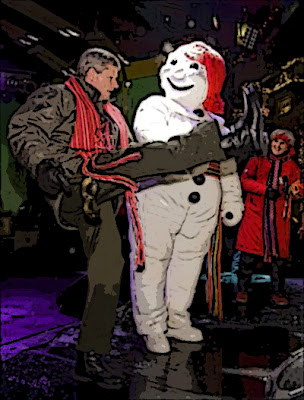 It's a well known fact in Quebec that poor Monsieur Bonhomme has not been himself, since he was pelted with snowballs at the Carnaval parade a few years ago. And Stephen Harper almost melted him by trying to show him how to goose step.

Only to accidentally cut one of  these.

So I'm glad Mr B is soon going to be feeling sooooooo much better.

Because by the time the Quebec-bashing Cons at Macleans  have stopped saying sorry, their lips should be turning blue from blowing that chubby snowman.

CLARIFICATION: The cover of last week’s magazine, with the headline “The Most Corrupt Province in Canada,” featured a photo-illustrated editorial cartoon depicting Bonhomme Carnaval carrying a briefcase stuffed with money. The cover has been criticized by representatives of the Carnaval de Québec, of which Bonhomme is a symbol.

Because that's quite a humping thumping eh?

Although I feel I really MUST point out that while Patriquin's article was shabby and ridiculous, Andrew Coyne's stinky little sidebar was far more grotesque.

A hideous mixture of selective facts, gross generalizations, and psycho-social babble that should, if there was any justice, shame him FOREVER.

But won't of course, because he's a big fish in the little media pond called Ottawa, where they sniff each others farts, and suckle each other silly.

But it doesn't really matter eh? Because the far more pressing questions should go to the Con-in-Chief Stephen Harper. And they are these:

Why is your Con government subsidizing a Con publication, that paid a Con, who ordered a hack, to slander Quebec?

The FCCQ, which represents more than 40,000 businesses and 100,000 businessmen and businesswomen in the province, said the article suggests Quebec’s business community has played an active role in a “generalized system” of corruption.

And why oh why do you want to tear our beautiful country apart?

As for moi,  I'm prepared to do my patriotic duty eh? If they need me to testify that when I saw the Maclean's cover with Bonhomme and the bulging briefcase, my first and lasting impression was that the Carnaval's organizers had been caught running off with the proceeds. No problem. Call me.

Golly. You know when the Cons tried to smear Quebec. And Stephen Harper almost melted the chubby snowman.

I bet nobody told them that old and scary Quebec folk tale.

The Revenge of Monsieur Bonhomme...

But, I would point out that it's no more fair to say the ROC is a homogenous j'accuse towards Quebec than to say Quebec is the most corrupt, so I'm not over happy with M. Duceppe's comments about 'Canadians'.

He has a rich target zone for pointing out anglo-corrupt specifics and just calling the article a reactionary merde du jour, but he seems to have been pleased to shovel the stink up higher on the other side of the pile.

Low brow anglotagonism helps the separatiste cause, so is he truly unhappy at the article, or more than willing to fan the wedge flames himself?

hi Niles...What would you expect Duceppe to do? Andrew Coyne has just stuck a knife into the side of Canada. And he's going to take full advantage. Of course he's going to fan the wedge flame, but that flame was lit by Coyne not him. And if you read the comments in English Canada it's obvious that there is a yellow anti-Quebec streak as wide as a country mile. It's insane, it's an act of self mutilation, but it's real. And here's the worst part. Coyne and company are whipping up anti-Quebec feeling just as Stephen Harper is planning to campaign against the province in the next election. Coincidence or not? Right. This country will not be safe until the Cons are DESTROYED...