Quebec, Mclean's, and the Hatred that Divides 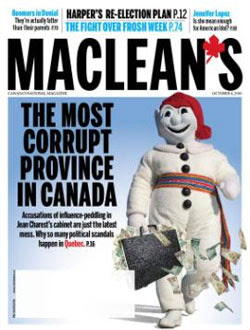 When I saw this cover, and I read this cheap little story I didn't know whether to laugh or cry. I wondered how desperate Maclean's must be to try to boost it readership by slandering an entire province, and whipping up anti-Quebec feeling.  But mostly I thought here we go again.

What part of this country doesn't now hate another? If it isn't East versus West, North versus South, it's urban versus rural,  the educated against the ignorant, or everybody against Toronto, and now English Canada against Quebec.

And  I wonder where are we going, and whether Canadians ever stop to think where all this animus will lead us?

As you know I have one foot in each solitude, and I love the idea of a vibrant French-speaking nation in a united Canada. I think it makes us stronger, and helps protect us from the greatest threat to our survival, the mad dying elephant south of the border.

But sadly many in English Canada never recovered from the last referendum. And you only have to read the comments in newspapers and blogs whenever the subject of Quebec comes up to realize this hate is now massive and pathological. So crass and ugly I try to hide those comments from my French-speaking Québécois companion who still believes in the goodness of this country.

I don't know if Quebec is more politically corrupt than other provinces. I very much doubt it. What I do know is that René Lévesque's Parti Québécois was the first government in Canada to reform the way political parties are financed. More than thirty years ago.

I also know that the Liberal sponsorship scandal happened because English Canada didn't understand Quebec. So we tottered blindly to the edge of the abyss, and then tried desperately to BUY the love of the province. When in fact Quebecers didn't want to be bought, they just wanted to be respected for who they are.

There may be particular reasons, for some of the scandals in the province. The state of the Liberal Party, and a culture of goonery in some construction unions. But the way Andrew Coyne goes poking around the history of the province, like a soothsayer massages a goat's guts, is absolutely ridiculous.

And intellectually dishonest. Because this is what really bothers Coyne:

Moreover, the distended role of the state in the economy under the Quebec Inc. model, its heavy use of subsidies and other tools of intervention, created a strong incentive to win the favour of those in power, by fair means or foul.

And the real reason he is always putting down the province is because he's a Con, the son of a Bank of Canada Governor, who believes in a survival of the fittest capitalism, and most Quebecers reject his party and his values.

They believe in the power of government to act in the best interests of its people,like many successful European states. As a result they have things like a cheap daycare program, a juvenile offender system that seeks to rehabilitate instead of just punish. And even a government commission looking into the problem of homophobia.

So many English Canadians have become so Americanized they don't realize that Quebec is the last bastion of Canadian values. But Coyne does and that's why he could write something as absurd as this:

Healthy political cultures are marked by contestability: results are unpredictable, success is incremental, and neither victory nor defeat are ever far from view. But the tendency, in federal politics, for Quebecers to throw their support to one party or another en bloc—and the province’s outsized importance, therefore, in deciding elections—has given rise to a peculiar set of pathologies.

And forget to mention Alberta, the one-party Banana Oil Republic of Canada. Or that another big reason for his denigration of Quebec is that it's the last obstacle to a Harper majority.

Because one can't help feel that Coyne, like so many other Cons, would love it if the province left Canada, so the country would be conservative FOREVER. Just like Britain would be a conservative country if Scotland separated.

Oh boy. I don't know where we are going. What I do know is that we are heading for a bad place. Because a nation that hates itself will not long survive.

I also know that as much as I like this big beautiful country the way it is, if the day should ever arrive that Quebec is forced to leave, because of all the hatred, and  because it wants to preserve its Canadian values in a nation that longer believes in them.

It would rip my heart out. But I'll be going with them.

However. since I'm still an optimist eh? If I was in Montreal tonight, I'd tell my Québécois friends, what I tell Sébastien.

Don't listen to the ignorant bigots, for they know not what they say.

One day hopefully, before it's too late, some of them at least will realize their terrible mistake and love you.

Because it IS a feeling eh?

The above link is my post on the subject. You said you didn't know whether to laugh or cry. I chose to laugh with a little help from a fellow prog blogger and local radio host who provided what a Maclean's apology would look like.

Do read it, and watch the videos. I'm sure you'll get a good laugh. Every so often, we have to laugh at ourselves and sometimes we Quebecers have thin skin and yes, sadly, we do dig our own proverbial graves. (Hello, Habs are too federalist and handing pamphlets about our national parks is indoctrinating federalism to school children?? Not to mention that Bill 103 which is nothing short of insane; and don't get me started on Pauline Marois the French language paranoid psycho who gutted our health care system when the PQ was governing under Lucien Bouchard).

As for other provinces, read my co-blogger Kim's posts, as well as some other blogs from BC, their provincial politics are nothing short of screwey these days...I believe the RCMP are involved. But does the likes of Maclean's cover them with as much relish as they do Quebec?? No sirree Bob!

So many English Canadians have become so Americanized they don't realize that Quebec is the last bastion of Canadian values.

Have you read Fire and Ice by Michael Adams? It compares opinion research in the USA and Canada, and was published in 2004. One of the findings was that the differences between how Canadians and Americans answered could largely be accounted for by Quebec and Texas - omit those two populations and the survey results would be much closer.

I also know that as much as I like this big beautiful country the way it is, if the day should ever arrive that Quebec is forced to leave, because of all the hatred, and because it wants to preserve its Canadian values in a nation that longer believes in them.

It would rip my heart out. But I'll be going with them.

A while ago I was thinking to myself, if Americans move to Canada when hardcore wingnuts get elected, where do Canadians move? ...Quebec.

Simon, if Quebec is the 'most corrupt', by what margin are we talking here? Hell, what scale are we using to measure?

Take it into perspective. Quebec just celebrated a 400th birthday and has been using that eeeeeevil census since it got going. They've had more time and joi de vivre to get corrupt, such as corrupt is. I mean, corrupt is a nice, broad word that means...what's been proven again? For government? The people?

Even at that, everyone else in Canada might be tied for second place by a few nanocentavos behind Quebec. Like a swimming race.

To throw around emotional tantrum accusations of being corrupt, someone has to believe they're pretty dang morally and ethically superior. Follow the money. Who gains from such ginning up?

hi ck...I read your post and I quite enjoyed it and the videos. And like everything else I find a lot of things to laugh about in Quebec...some people drive me crazy and La Marois is definitely one of them But because of my situation, this irrational hatred for Quebec depresses me. I just don't understand it. I also can't forget that when Harper attacked Quebec after the coalition crisis his numbers soared into majority territory. It's madness because Canada without Quebec would be a much smaller country in every possible way...

hi Marissa...that's interesting about Texas and Quebec. But it doesn't surprise me because if you subtract Quebec from public opinion polls, Canada comes out looking like quite a different country. People also forget how wonderfully creative Quebecers are and how they contribute to the way others perceive us. I love the idea of the two solitudes, but not the solitudes I see today. The one Hugh MacLennan wrote about when he said this:

"love consists in this, that two solitudes protect, and touch and greet each other."

If they want to write that on my tombstone I won't object... :)

Hi Niles...you're absolutely right. Where are the studies to back up such a sweeping generalization that borders on the racist. I also wanted to get into the sense of the word corruption. Like for example is the government of Alberta not morally corrupt by promoting the oil sands that are helping to torch the planet? And other stuff like that. But my post was already too long. What I also wish I had been able to add was that this country was built with the Canadian genius for compromise,
and replacing that with the confrontation winner/loser mentality of America can only destroy us. To answer your question nobody can gain from such games, and when I see people who should know better doing it, I fear for our future. Finally, you know what bothers me too, is that most Québécois, like Sébastien, are totally oblivious to how much they are hated. And I don't have it in me to tell them...

Don't sweat it Simon. Consider the source. Who reads Macleans anymore? It is completely irrelevant.

In some respects we still have two solitudes, or as you have mentioned, more solitudes.

If Macleans wanted to examine corruption they'd have a photo of the out of control cops with their boots on the throats of peaceful protesters. That's corruption, Harper style.

Until I see otherwise I believe the costs were at least 10 times higher than they should have been. The cost itemization has yet to be released in full detail.

Policing costs for the G20 were about the same as the cost of policing the whole city of Toronto for an entire year.

hi anonymous...I suppose you're right. But I must say that I'm still disappointed in Macleans, because I quite enjoy some of their writers, and I thought they were better than that.
But the editor Ken Whyte is an asshole, Coyne is more Con every day, so I guess I shouldn't be surprised.
But you're right about the corruption part. The Harper government is rotting from the head down. And the stench of moral corruption is EVERYWHERE...