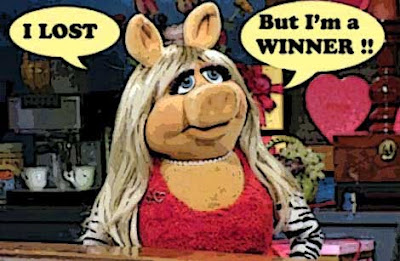 Oh no. Gag me with a pork chop. John Ivison is so stimulated aroused impressed by Candy Hoeppner he's declaring that porker loser a WINNER.

As Candice Hoeppner stood up in the House of Commons this afternoon to defend herself against Liberal accusations that her fight to scrap the long-gun registry effectively condones domestic violence, it reminded me of a British drama that appeared on screens over here recently.

The Amazing Mrs. Pritchard featured a perky blond supermarket manager, angry at the state of politics, who decides to run, gains national attention and ends up as Prime Minister of Great Britain

Can you believe that? Down John down. She may be a hooker for the gun lobby. But she's got STANDARDS. Oink. Oink.

C'mon let's get SERIOUS. Despite all the money the Cons spent on her campaign, Candy "I'd kill Bambi" Hoeppner failed to deliver the cold dead body of the gun registry.

She spent so much time out of the country Vic Toews had to put on a blonde wig and pretend he was her. And she's lucky she wasn't arrested for fraud, for claiming it  really really REALLY was a private members's bill. Shame on her.

I mean don't morals count for ANYTHING anymore?

And I doubt we'll be seeing too much of her after this debacle. Did you see how Stephen Harper treated her on the staircase? 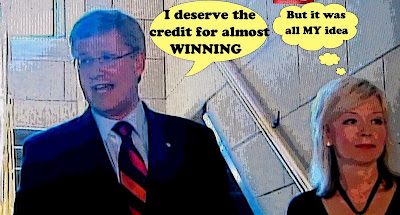 Although he repeated himself at least THREE times, he didn't give Candy a chance to say a WORD. She just had to stand there. And then follow him meekly up the stairs. Like a good Con wife.... or a handmaiden.

But then we know what  Stephen Harper thinks of women eh? Too bad Bambi Candy doesn't. The IDIOT.

And then there are all those other reasons why the Cons lost big.

(1) It's never a good idea to try to pit rural Canadians against urban Canadians, when the latter make up EIGHTY per cent of the population.

(2) We haven't even started to target the Cons from urban areas who betrayed the wishes of their constituents. And boy are they going to get it. Why DO they hate women soooooooo much?

(3) The Con MP's in Quebec were already the walking dead or Zombies. Now they're just dead. And without Quebec the Cons can FORGET about a majority.

(4) It's hard enough posing as crime fighters and going after invisible criminals. So imagine how hard it's going to be now that they have to explain why they hate police officers soooooooo much. Isn't threatening the lives of cops a crime? Why do these Cons want to make our streets slippery with blood? Are they the real criminals?

(5) The gun registry debate made Michael Ignatieff look like a strong leader.

When Mr. Ignatieff is not tentatively jabbing at his opponent, he often swings wildly—sweeping overhand rights that finish a foot or two off the mark and leave the Liberal leader off balance and prone for a counterattack. Here, though, was a sharp right hook, a tight, finely aimed blow to the chin.

And, lo and behold, it seemed legitimately to stagger Mr. Harper.

And it made the NDP look like a party that listened.

Which to me sounds like a win win situation.

(6) Stephen Harper's attempt to pit Canadian against Canadian in a country as fragile as this one, has only made him look even more like a dangerous maniac. Or an AMERIKAN.

And only fired up our desire to get rid of him and his foul AmeriCons. 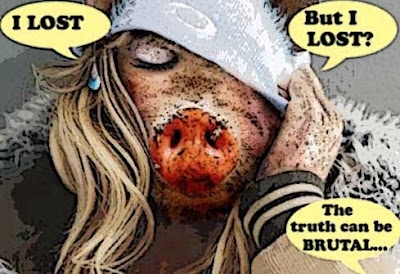 Because the brutal truth is the Cons have  shown their ugly divisive faces.

The country can't afford them any longer, if it wants to remain one country.

In the next election it's now Canada versus Amerika.

Well put (but the thought of Vic Toews in a blonde wig....shudder). The Harpocrites and their loyal base are so delusional about how the majority of the country feels on this issue.

Excellent points. Make no mistake. Despite all the spinning, from the Cons and their friends, there is no question that Harper lost. And he lost big because this was an issue that he had promised his base he would deliver. These people like strong leaders, not someone who cannot deliver ....

The irony of it is that the registry would likely have been killed already if Harper had not prorogued Parliament the second time. The opposition parties were in disarray until the police report came out publicly.

I laugh every time someone claims that Harper is a master strategist and that he wins by losing on this vote.

This is by far my favourite Canadian politics blog. Well said!

You always seem to be able to end on a positive note and I can't help ut appreciate it.

I noticed, during the roll call vote, that Candace Hoeppner's bench is in the last row on the government side.

I don't think she'll be moving closer to Harper any time soon. At least, she's on the correct side of the curtains.

I just wonder what her relationship is to Jake Hoeppner, also of Morden Manitoba--uncle, daddy, what? The Hoeppners are rather thick on the ground in Morden and if memory serves me correctly, Jake was rather thick headed when he was an MP. This link can reveal much:

What we are seeing is a slow motion trainwreck and Harper hasn't read the wayside signals.

It'll all be over soon and I bet Hoeppner won't be back again.

hi earlofswirl...you know I wouldn't be surprised if you're right. I think him and his base are living in a world getting smaller by the minute. I heard Allan Gregg on TV tonight say that he doesn't think the gun registry vote is a game changer. It may make some people angry, but anyone who would vote for someone just for that is a moron, and I like to think that most Canadians are better than that. Of course, if I'm wrong, I'll have to buy a gun and shoot myself... ;)

hi anonymous...thanks...I'm glad you agree with me that Harper came out of this one badly. And not just for the reasons you mention. There's also the fact that he has lost the female vote, which earlier in the year was high enough to propel him into majority territory. And then there is the cumulative effect of all these wedge issues, where ideology trumps reason. Judging by what I read and hear a lot of Canadians are really starting to get tired of him, and sooner or later he's going to pay the price.
As for those in the media who still believe Harper is a political genius, it's like the emperor with no clothes, and totally PATHETIC...

hi Marissa...thanks a lot for those sweet words. I'm blushing. ;)
You know it's funny. I never thought I would end up blogging about politics all the time. I thought it would be more personal about my little adventures in life. But as I say in my sidebar you can't write poems about trees, when the tyrant is in the woods. So until he goes I'm not going anywhere... :)

hi PeterC...thanks I'm glad you liked it. And I'm also glad you noticed how I try to end every post on a positive note. I don't really try to influence progressives. That would be a little like herding cats. ;) But I do try to encourage them and/or cheer them up.
I believe in the power of human good, so today may be dark, but tomorrow will be brighter.I mean it better be or I'll be extremely annoyed... :)

hi Torontonian...once again you are a font of fascinating knowledge. I must admit I had never heard of Jake Hoeppner.

In 1996, he spoke out against a federal measure that extended anti-discrimination provisions to homosexuals by claiming that homosexuality was the cause of civil war in Liberia and Zambia.

As for the slow train wreck I do hope you're right. I have no doubt that train is going over the abyss, but it sure is SLOW... ;)