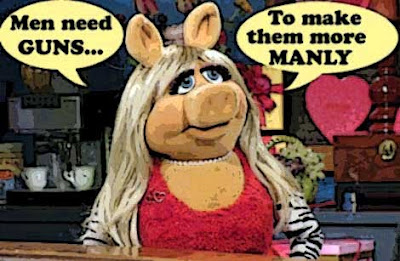 OK. So I'm watching the CBC Snooze last night and suddenly up pops Candy Hoeppner, the Con porker who allegedly came up with the idea to kill the gun registry.

And Mendy Wesley asks her does she have any idea how much the Cons have spent supporting her alleged Private Member's Bill, with big billboards, radio ads, fancy websites, and just plain old Con manure?

The Google ads are designed to target constituents in the ridings of the opposition MPs as they surf on the Web for information about the registry and their federal representatives. The Tories say it is the first time they’ve used this kind of advertising.

And guess what? Candy says she doesn't have ANY idea. Nothing, rien, nada. So now I'm thinking who is paying for her cross-country tour,and the fancy SUV?

And does anybody with an IQ higher than a turnip, or a drooling gun nut, still believe this is a Private Member's Bill?

Which made me wonder why DID the Cons choose her to front this killer bill? What don't I know about Candy? Why did Stephen Harper anoint her with his tongue to be the porker Evita of the NRA gun nut lobby?

And sure enough I found it. Believe it or not Candy Hoeppner is more worried about men being marginalized.

The MP encouraged the meeting participants not to accept the media portrayal of males as passive and apathetic, and challenged them to explore cooperative measures that will encourage men to celebrate and nurture their place in families and society.

Than she is about women being murdered. Or betraying her own gender.

Guns are a constant in the lives of rural Canadian women — one reason many of them as are as committed to gun control and the gun registry as their urban sisters.

“It's not a matter of rural versus urban. It's a public safety issue. How many women and children in rural Canada are threatened in their own homes with a gun? More than we want to know, I think.”

Which explains why she's prepared to do ANYTHING to please the misogynist scum in the Harper government.

Even if women are hurt or silenced.

“Rural and farm women who experience violence in the home describe a cycle of intimidation with guns . . . which makes it really difficult for women even to report what's going on, “ says Jo-Ann Brooke, director of the Women's Sexual Assault Centre of Renfrew County in Pembroke, Ont.

Oh well. It looks as if we are going to be able to save the registry. Candy's Evita of the Rednecks act will quickly be forgotten.

And until we drive her and her bloodthirsty porkers out of office.

Which will be SOON.

She can go back to doing what she does best.

Gawd. You don't think Candy will go WILD like Miss Piggy when she loses the Gun Registry vote?

Do you have any factual information on the gun registry?

hi Paul...Factual information? Nope. Sorry. I'm not only illiterate I'm lazy eh? I just trust police officers, emergency room doctors, nurses and women's groups more than I trust Cons and duck hunters.
Did I ever tell you the story of what happened to me when I went into the forest to feed the squirrels, during hunting season, with a goose feather in my cap?
Oh well never mind. You'd say it was my fault... ;)

I think this whole debate has been a waste of time. Fix the registry and get onto the real issues facing us.

The only reason for this debate was to build a strong re-election effort in rural Canada for the Harper Conservatives.

And I for one would like to hear what happened in the forest :)

hi Ricky...I agree that we never should have had this divisive debate.
It's just a crass attempt by the Harperites to drive yet another wedge issue between Canadians, and distract us from the real issues.
As for what happened...I'm so traumatized I can't remember. But I'm sure it was SCANDALOUS... ;)

Hey Simon. Next time you step out side, wear your bright red Star Trek shirt.

hi anonymous...sorry can't do. I may have my flaws, but being a Trekkie isn't one of them...

I bought my house 5 years ago. The man I bought it from died 3 years ago. Last year I received a registered letter from the Canadian Firearms Center addressed to the previous owner. I know he was a hunter in his younger years and obviously had registered firearms. Long story short, it turns out the Canadian Firearms Center was looking for this fellow and his firearms as his Firearms License had expired 4 years ago and he still had firearms registered.

They do not know where his guns are, nor did they even know he was dead. His guns were registered to my address.

This is just once instance showing the glaring mistakes in the registery. What good is the rgistery when it is full of errors and ommissions?

This blog post shows that you know absolutely nothing about guns or gun control or crime. You may want pick up a book and read before posting.
The fact that you label all owners of guns as "nuts" shows that you have very little if any education, and even less tact.
Do you really believe that if all honest people had their guns taken away from them (which is what gun control advocates want) that is going to stop criminals from illegally owning and illegally using their guns and "murdering women" as you so put it?
I have to register my car, does that stop criminals from stealing cars, or from killing innocent people when they car-jack them?
Cars don't kill people, criminals stealing cars kill people.