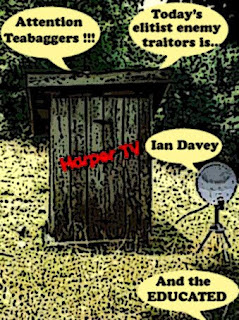 Oh look. Another good reason not to give Fox News North aka Harper TV a license.

Ian Davey is an idiot, but we thank him for being the idiot that he is.

He just let the Liberal scat out of the bag.

Asked Sunday during CTV’s Question Period about Bob Rae’s potential support of federal bucks for a possible NHL arena in Quebec City, the lesser Davey sloughed off the question with this high-brow insult.

“It was once said about the Toronto Sun that it’s a newspaper for people who can’t read,” he said. “And I think that probably applies to the whole chain.”

So, there it is — straight from the horse’s ass.You, dear readers, are as dumb as posts.

Do I really need to elaborate? I mean who wrote dat ? Ezra Levant, a monkey, or a tea bagger? And when they finished were they standing on their desks, bathed in sweat, and foaming at the mouth. Or swinging from a chandelier ?

Now look Ian Davey got it wrong. The people who read The Sun can read. Duh. But because they are generally less educated, they can be easily manipulated. They might not be able to tell a real story from a bogus one.

And they might have more trouble than most telling the difference between reality and PMO talking points.

On the road this summer aboard the "Liberal Express", I witnessed several occasions where Sun reporters in the regions produced a piece of paper with a question for Michael Ignatieff. They would read this query, sometimes saying they'd been told to ask the question by their bosses. Funnily enough, the questions mirrored Conservative talking points that were also sent by email to reporters aboard the bus.

Which of course can be fatal for the health of a democracy.

Tell the CRTC that if they don't dismiss their ridiculous licence application in less than ten minutes they better have a really good explanation.

Because if those Con monkeys suck bananas in print eh?

Just imagine what they could do with a camera...

Hey , Simon nice article.. monkey will be surely getting more business as you are saying..

I've been saying pretty much the same thing for the past couple of posts.

Thank you for continuing to spew similar hate to that of Davey. You have no idea just how much you're helping Harper and the Conservatives increase their share of the popular vote!

And you know the CRTC is gonna just roll over and play dead.

Or is that bend over and take it?

hi Online Tv...I'm glad you liked it. I did have a video of a monkey farting, but it was too sublime for Harper TV... ;)

hi thwap...yes I saw them. Good stuff. I would have linked to them, but I didn't want my post to suffer by comparison... :)

You have no idea just how much you're helping Harper and the Conservatives increase their share of the popular vote!

Oh no. That's the most devastating comment I've EVER received. ;)

But you're wrong about spewing hate. I don't really care what the Sun types say about anything. I simply object to any station taking it's marching orders from the PMO.

That's bad for democracy never mind what government is doing it. If a Liberal government or any other did it, I'd object just as strongly...

hi Brahm...Well I'll be watching those CRTC proceedings carefully. Von Fink or whatever his name is says Fox News North's application will be treated as any other. But I note that the application is already fast tracked, and they are asking the CRTC
to create a new category, so I'm afraid the jury is still out. i.e. I'm keeping my fingers crossed... :)