Remembering 9/11 and All the Other Victims 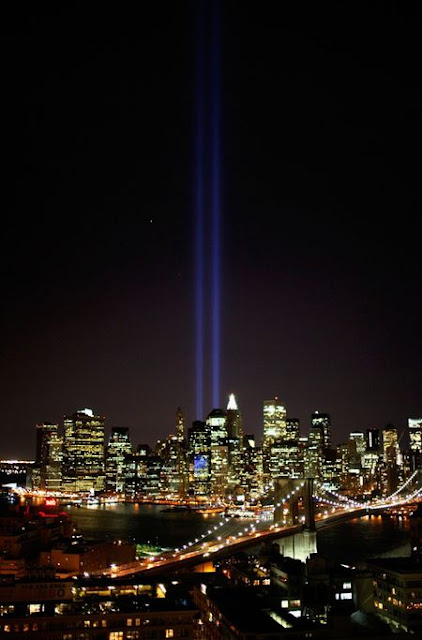 Two beams of light rising into the sky over Manhattan tonight.

To remember all the innocents murdered by evil religious fanatics nine years ago.

But let's also remember the hundreds of thousands of other innocent civilians in Iraq and Afghanistan who died because of 9/11.

There is no monument to them.  We don't know their names.

There is no light show to remember their agony.

So this one will have to do...

But let's mourn the others too.

Like Jonathan Couturier,of Loretteville, Québec, Canada, who thought the war in Afghanistan was a "bit useless." 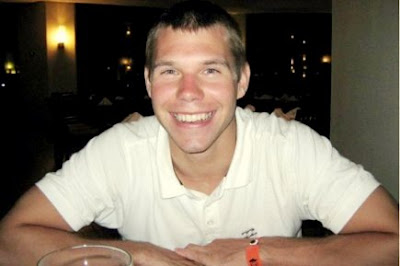 But died there anyway. At the age of twenty-three.

Glad that bloggers like yourself are remembering other innocents who died as a by-product of 9/11 who have no one to remember them.

Brings me to my next point, which will be more of a spoiler to my blog post tomorrow, which will be sure to send folks off to rush for the smelling salts. It will piss folks off, at least, I hope so.

9 years later and this has got to be the memorial that brings out the wingnut element crawling out of their rocks and this year, after reading the tweets, the blogs and yes, Rosie Di Manno's idiotic column regarding the proposed Islamic Center 2 blocks away from Ground Zero.

In short, September 11 has become a circus and nothing short of a travesty oozing of hypocrisy...catch my post tomorrow and you'll understand why. I'm sure most of the more intelligent readers who think outside the box will too.

Why hypocrisy? Another hint: much like our beleaguered disabled veterans whom Col Pat Stogran is about to lose his job for, many of the surviving rescue workers from ground Zero who became very sick as a result from exposure to that toxic smoke and debrie are now incapable of working and have no health care. Michael Moore brought a few such people to our attention in his 2007 movie, "Sicko".

The media covers that whackjob, Pastor Jones to the point of overkill, where now, he makes a killing because of this, but no media coverage talking of the plight of those rescue workers who struggle with life everyday.

So, when I see SArah Palin on Twitter, shrieking about "sensitivity to the memory of the 9/11 victims". I just want 2 vomit and gouge my eyes out with a fork. I see that the Death Panel darling doesn't even address those rescue workers or pleading to Americans to help them.

As I said, catch the longer version on my blog tomorrow afternoon.