The Decline and Fall of Napoleon Harper 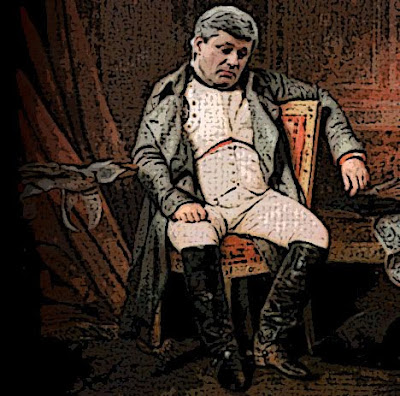 Oh my poor tin pot dictator. He spent billions of our dollars promoting himself. He tried to hog the glory at the Olympics. He stuck to the Queen like a bed bug. He pit Canadians against Canadians like a crazy man.

And all he got was this lousy poll.

The EKOS survey delivers nothing but bad news for the Tories, showing their support reduced to a narrow base of hardcore older Western males. This, as they bleed support from women, young people and university educated Canadians.

And look it gets better.

Oh no. He blew an ELEVEN point lead. He could lose FORTY seats. No wonder he's so desperate. Where's my mah... mah... mah... MAJORITY?

Golly Great Napoleon I don't know. May I suggest you consult a proctologist ? But don't bother looking for it in Quebec

Because as Frank Graves points out:

Quebec is now “scorched earth” for the Conservatives. The EKOS numbers indicate the party would be reduced to one seat from the 11 they now hold in that province.

And since Quebecers are the biggest supporters of the gun registry, you can see the writing on the wall.

And so can Jack Layton.

Jack Layton's lustre seems diminished from the past. While he is still the only tested leader with a net positive approval rating, that margin has shrunk. He does very well with women and in Quebec. The looming gun registry challenge may pose special challenges for Mr. Layton with these two favourable constituent groups (who tend to be strongly in favour of gun control)

Because with Ignatieff in position to defeat Harper, if the NDP helps kill the gun registry, a wave of defections will make Iggy Prime Minister.

Yup. The census brought the Cons down.The gun registry will finish them off. Now it's Harper and his grubby old rednecks, versus women, the young, and the educated.

How can we lose eh?

But wait what's this?

The pollster notes, too, that the parties were tied last fall. But that was before the Prime Minister’s virtuoso performance of a Beatles tune at a National Arts Centre gala, after which the Tories surged to a 16-point lead in the polls last October.

Oh sure. That should work.

I can just see Great Desperate Leader playing for an audience of educated people.

Trying to make them LOVE him again.

By dressing up as a kitten.

And  tickling pawing the keys.... 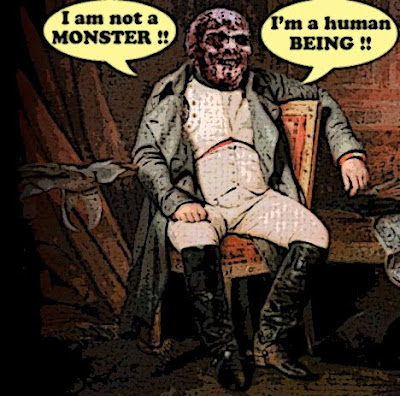 The Decline and Fall of Napoleon Harper.

I LOVE horror movies with happy endings. Don't you?

What I find amazing is that the Conservatives stand to lose 44 seats--nearly 1/3 of its seat count in the Commons.

That has gotta hurt worse than liniment on an open sore.

Harper styled himself after Bush II and he (Bush II) squandered his political legacy. Harper has done the same thing too.

What can he look back at and say, "I did that", and be proud of it? Not the GST! That was the first hole in the hull of the ship.

He has nothing as a legacy except a divided electorate who will come out and see he gets the Kim Campbell treatment--massive repudiation.

Bah! Humbug to him!

Polls come and polls go. The Libs have fallen into the trough more often than the Cons since Harpo came to power. Loathe the guy as I do, Harper is by far the shrewder tactician of them all and he has political instincts that Iggy so lacks.

Maybe, just maybe, Harper has finally run his course.. It's sad the Libs have had to wait for Harper to implode rather than winning on their own merits but a win is a win.

Unfortunately, as we know all too well here in B.C., winning by a narrow margin on an anti-government vote only leaves the successor wobbly and enormously vulnerable.

As a former Liberal (too progressive for the Libs, too moderate for the NDP), I'm on the outside looking in. What I see troubles me. The amount of energy the Libs and NDP expend attacking each other instead of Harper is discouraging. When things start going their way they can't help themselves but get sidetracked in futile bitch-slapping. It's childish and it's the best thing Harper has going for him.

Oh well, gloat over the polls if you will but there's a lot of road to travel yet before an election.

hi David...thanks I appreciate it. I do try to mix a little humour in with my criticism of this hideous regime we are living under. They can drive us to the edge of the abyss, they can embarrass us in the eyes of the world, but they will NEVER kill our joyous spirit.
And besides as anyone who has ever seen me blog can attest to, nobody enjoys my bad jokes, and corny photoshops more than I do... :)

hi Torontonian...yes I must say I was amazed too. With forty-four seats at stake there must be many Con sheeplets starting to get restless. I wonder if one of them will dare question Harper's leadership.
I doubt it, but it's a nice thought.
Either he goes or they'll be serving lamb at 24 Sussex... :)

hi Mound...actually I agree with everything you say. And I realize that the electorate is fickle and that a lot will be decided during the campaign. But because only Ignatieff can replace Harper I'm glad that he seems to be improving as a politician. So I'm not really gloating, I'm just trying to seize any bit of good news, and use it to keep our spirits up... :)