The Death of Miriam Makeba 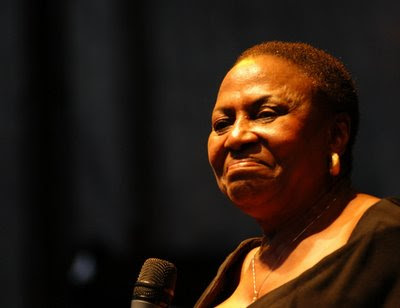 They called her Mama Africa. She was the first African singer to bring the wonderful music of that continent to the world.

She fought the Apartheid thugs who forced her into exile for decades.

She died fighting the thugs from the Mafia.

Miriam Makeba, the musical symbol of black South Africans' struggle against apartheid, has died at the age of 76 after collapsing at a concert in Italy.

Ever the activist, Makeba collapsed after singing in support of an Italian author facing Mafia death threats.

What a way to go.

Here's what Nelson Mandela had to say about her today.

“Her haunting melodies gave voice to the pain of exile and dislocation which she felt for 31 long years. At the same time, her music inspired a powerful sense of hope in all of us.”

“She was South Africa’s first lady of song and so richly deserved the title of Mama Afrika. She was a mother to our struggle and to the young nation of ours.”

She had such grace, such dignity, and so many good songs

But of course she'll always be known for this one.

If that song doesn't make you want to get up and dance NOTHING will.

You know who my favourite South African singer was.

But even Lucky would agree.

Miriam Makeba was BIGGER than Africa itself.

Thank you Mama you were GREAT...

Well done. I had few words, so I posted a bunch of songs.

Hi Dr Dawg...thank you and I added a link to your site. It was practically a jukebox.
EXCELLENT... :)