Homophobia: When Enough is Enough 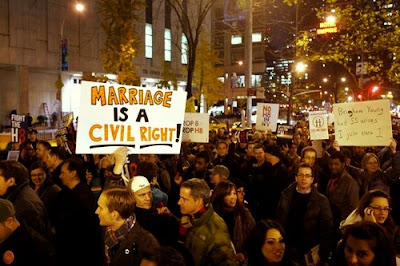 As the wave of protests against Proposition 8 continues. And demonstrators chant "Gay, straight, black, white, marriage is a civil right."

The man accused of bashing two lesbian moms plays the victim and the race card. 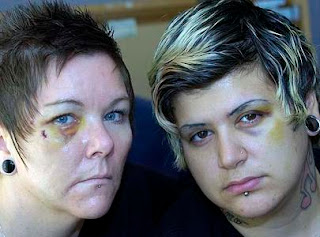 Mr. Scott's lawyer said in the news release his client has been a victim of racial and physical abuse and is looking forward to his day in court. "The parties responsible will be held accountable for the racially motivated and unprovoked attack he suffered."

“I’ma go on the record right now with this. Homosexuals are probably not gonna like this album. I don’t want your f**got money any goddamn way. I don’t like it [homosexuality]. Carry that s**t somewhere else.”

“It’s just that every time that you turn on the TV, that sissy s**t is on. And they act like its f**king okay. The world is changing for the worst when s**t like that happens. And I address that issue. I address it hard as hell.”

“He goes both ways/Either way he’s gay/Ain’t no other way to say/He’s a f**king faggot so I’m lettin’ off my AK/Bust ‘em in his forehead/He ain’t worth lettin’ live/A man and man shouldn’t raise another man’s kids!”

Dan Savage explains why gays and lesbians didn't take their struggle to the streets BEFORE the election.

Most gay people grow up desperately trying to pass, to blend in; most of us flee to cities where we can live our lives in relative peace and security. We don't go looking for fights. And most gay people walk around without realizing that they've internalized the dynamics of high school hells some of us barely survived: it's better to pass, to stay out of sight, to avoid making waves, lest you attract negative attention, lest you get bashed.

But once you get bashed, once someone else throws the first punch, then you fight back—what other choice do you have?

And I say enough is ENOUGH.

If the bigots think gays are angry now.

They ain't seen nothing yet...

P.S. If you want to see some of that anger...Or you need a small victory. You can watch Dan Savage make a seething monkey out of a Christianist bigot.

Oh yeah, I know. Dan really shouldn't interrupt so much.But you can't argue with these Christianist bigots only confront them.

And it REALLY pissed off Perkins.

Ack! Good vid -- I can't blame Dan Savage for interrupting -- trying to reason with one of these fundamentalist chimps must be like talking to a friggin' wall. I think my head would explode. Arrgh!

It's nice to see the pooooor man will get his day in court. After all, I'm sure the witnesses both adult and juvenile watching the hideous assault...where he had to defend his vulnerable self by throwing the first blows I guess...are more than ready to testify how he was victimized by the two women.

Or did he mean he was victimized by someone else at another time and this is the latest version of the 'twinkie' defense to justify violence against people for their sexuality?

It will be interesting to see if the usual suspects take up the benighted male victim's cause. Should make for morbid entertainment across the bloggario for a few weeks.

Hi JJ!!! yeah I know...especially when all Perkins does is spread more hate and more LIES. And it's grating to hear him complain about how the gays are terrorizing the Christianists. When despite the fact that millions and millions of gays and lesbians are really angry NOBODY has been hurt.
Oh well....How is your new blog coming? You've almost inspired me to change mine. But I think I'll wait to see how your project works out before I try something so SCARY !! :)

Hi Niles....my feelings EXACTLY. I thought I better not say anything about that because I might regret it.
I saw some cellphone video of the aftermath of the assault and the face of one of the women was COVERED with blood.
What a fucking animal and a coward. I hope he gets his just desserts. He better....