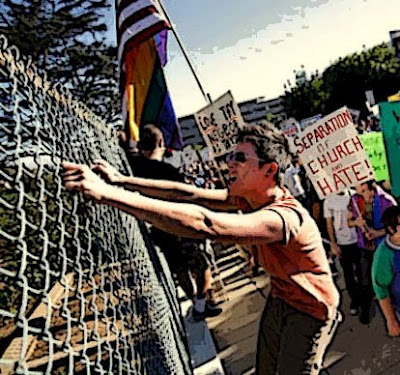 It's been ten days since Obama was elected and Proposition 8 was approved. And for millions of gay people a night of jubilation and joy turned to disappointment and sadness. And then ANGER.

And who can blame them? How would you feel if your rights were taken away? If you were made to feel like second-class citizens. If you were insulted all the time, and assaulted and sometimes murdered. And then they told you your love wasn't good enough to get married. And they didn't just put you down, they hurt the one you love.

Oh yeah. Anger can be therapeutic and keep you going when nothing else does.

But it's time to move on.

That's why I'll be joining gays and lesbians and their straight friends at this Day of Protest tomorrow.

I know it's a small gesture. And I'm a Canadian not an American. But I want to show my solidarity with my brothers and sisters in the U.S. because the fight for human equality knows no borders. And we are FAMILY.

I want to show the religious fanatics in that country, and this one, that I will never be intimidated by their hateful garbage. Or stop fighting them.

And three I want to go because I LOVE the mission statement of the Day of Protest's organizers. 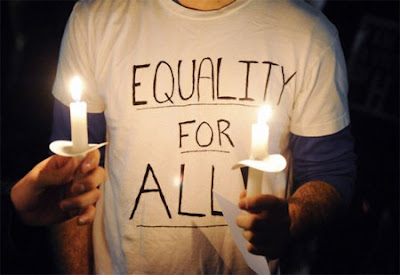 Our movement seeks to encourage the LGBTQ community not to look towards the past and place blame, but instead to look forward toward what needs to be done now to achieve one goal: Full equality for ALL. We stand for reaching out across all communities. We do not stand for bigotry, for scapegoating, or using anger as our driving force.

We will encourage our community to not let anger steer the conversation, but with an understanding that anger is a human reaction and we hope that it can be used as a catalyst toward positive change.

Because it IS time to move on, and channel all that anger into a massive movement for positive CHANGE.

And speaking of change....look what one of our friends, Shepard Fairey, who made the famous Obama poster... made for us today. 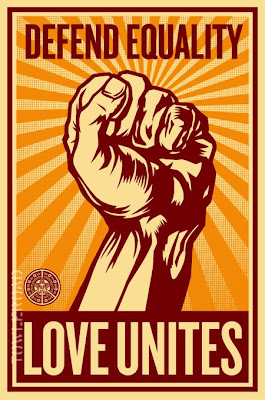 Anger passes. But silence is HISTORY.

Our love, and the love and support of our straight friends, is stronger than their hate.

And the bigots will be BEATEN...

P.S. in case you missed them...here are the times and places of the Canadian protests.
Posted by Simon at 9:40 PM

Well I'm sorry there is nothing organized for Winnipeg. Shame on us.

It would have been great given that the Conservative Convention is in town and one of their working group propositions includes entrenching the rights of religious groups to deny performing SSM ceremonies.

Sometimes this city and country depress me. But hey, the movement to broaden the protest against Proposition 8 in California is really a fantastic blip.

I love when the grassroots take to the streets. I will be along with you in spirit Simon.

Family obligations will be keeping me way from the Toronto protest, but my heart is with you all.

so whats the consequence?is the pro8 accepted?what does osama want?

Hi Beijing...thanks ...and despite the rain...and the fact I'm coming dwn with a cold...I FELT the spirit!! :)
Too bad about Winnipeg. It would have been nice to organize a little rally at the entrance to the Conservative Convention.Heh heh heh.
But yes it is great to see the gay movement turn into a grassroots movement, instead of leaving it all up to the decent but VERY respectable and somewhat stuffy leaders who thought they could do it all by themselves. As a humble and not very respectable foot soldier I can only applaud...

Hi Jennifer...thanks for your support. There weren't that many of us for a city of this size. But the weather WAS lousy. And we did make a lot of noise!!! :)

Hi Ur Merit...right now proposition 8 is the law so gay people can't be married anymore. But several groups are challenging the law. There might be a new vote in 2010 if that fails. And although Obama can't do anything right now...even if he wanted to...he can eventually change the makeup of the Supreme Court and make it more gay-friendly.
So one way or the other change is on the way.
BTW how are gay rights in China these days now that the Olympics are over?
You know I'm always interested in your fascinating country. And hoping for the best... :)

Understandable, given that Toronto is one of the most queer-friendly cities in North America. Kinda hard to get people worked up - although if Prop 8 has proven anything it's that no rights are truly safe.