Gay Marriage and the Blogging Tories 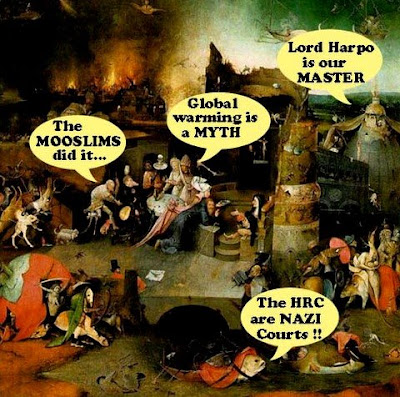 OMG. I paid my daily visit to the Blogging Tories today. And I got a HORRIBLE shock.

There in the midst of all that seething and heaving blogging depravity was this shimmering post.

I've discussed same-sex marriage issue with many of its opponents, and I've never been given a convincing reason why letting gays and lesbians marry will ruin that ancient institution for the rest of us.

With a great link:

Who precisely does gay marriage hurt? Can anyone give me a serious answer to that? If your society is so fucking fragile that the idea of homosexuals committing their lives to one another - just as social conservatives say they want everyone to - is threat to your society, then maybe your society just isn’t worth saving. At what point does the government and, by extension, the people, mind their own fucking business?

Wow. That was EXCELLENT.

I couldn't believe my eyes. If I wasn't sitting down I would have had to sit down, if you know what I mean.

Could the Blogging Tories...the home of Small Dead Chihuahuas, the Halls of Macaroni, Celestial Clunker, The Stoopid of Dr Roy, and of course the Nerd Monster Lezra, have been so inspired by the Coming of the Obama, that they were turning over a new leaf?

And then I read the comments:

So what happens when schizophrenics decide it's their right to marry farm animals? Or when bipolars want to marry rocks? Or when the criminally insane want to marry a harem of their dead victims? Well... we're being asked to accomodate one group of mentally ill's bizarre requests... why not all of them? Why are we bending over backwards to accept one kind of mental illness as normal and good but others we treat and try to cure?

.....to legitimize such sinful behavior by granting it the status of marriage is just too much, and should be resisted by all legal means. To such a believer you might as well allow thieves to steal as much as they like and call it "spreading the wealth around", or allow people to commit infanticide and call it "the right to choose".

Personally, I refuse to call two weiners or two buns a hot dog. I insist that a hot dog must have both a weiner and a bun. If it doesn't it's not a hot dog. Same with marriage.

And then I wasn't shocked anymore. And I took another look at the Blogging Tories. And no they hadn't changed. Too many of them are still the same wretched bigots.

The Nazis are INVADING Remembrance Day? Uh oh. Never mind the paddywagon to the HRC Gulag. How about an ambulance to the insane asylum? Somebody. Quickly.

But good for Damian and Skippy. I don't envy them. With the right-wing movement in North America shrinking into the hands of the Christianists and the crazies, they've got their work cut out for them.

And as for gay people?

What do you think?

For them the struggle CONTINUES... 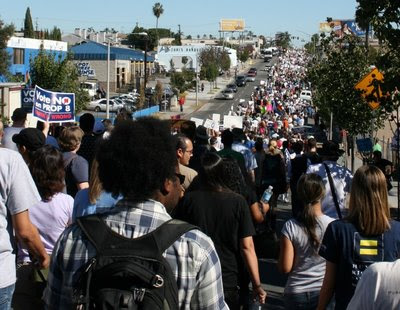 It's interesting...Cause conservatism has been labelled a mental disorder...

In their case, I KNOW it's the truth. Heh. Only a crazy person would get their knickers in a twist about others lives like that. :)

Hi JJ!!! Wow that WAS good.It's very encouraging to see that kind of reaction now that the elation over Obama's win has died down a bit. And they can see us standing in the corner sad and depressed. Not me but a lot of gays and lesbians.I'm just pissed off.
Oh well I'm just glad to hear from you. How is the sparkly unicorn? :)
I hope you're just having a rest and haven't decided to stop blogging. A rest is good though. Blogging is such an addiction.And sometimes it's good to take some time to do the things you've been putting off. Like backing up all the stuff you don't want to lose when your hard disc gives up the ghost...ugh...or downloading all the free music you can get before its illegal. So anyway I hope you are well and enjoying your little...small....very short...miniscule...teeny weeny break. And come back SOON !!!!!

Hi Pale....you know I should have known. I thought they were just funny acting.... or CRIMINALS who hadn't been caught. ;)

As an un-gay man, here are my observations.

Ever since gay marriage came to Canada, there are more imported used cars coming from Japan. Those cars have the steering wheel on the right side. Lot's of these cars are going to BC. Let's see the connection: gay marriages in Vancouver; right-hand drive cars in BC. Hmm. Maybe Californians should be thankful that no more gay wedding ceremonies, there won't be used right-hand drive Japanese cars on Interstate 5.

Seriously, gay marriage is only a threat to people who wish to control others through Christianity. The religion itself is not a problem as there are churches in Canada that gladly service the LGBT community. It's particular Christians who fear losing power to dictate how people should live their lives.

I sometimes look at photos when my great-uncles and aunts got married 75 years ago. In the wedding party, my great-grandparents we're front and centre in the group shot. The bride and groom were on either side of them. The symbolism was that my great-aunt married into her husband's family; her father-in-law/parents-in-law (sorry for the inequality) would be in charge of the marriage. How's that for a traditional marriage?

Now that the Americans have elected Barack Obama as their next president, I can put away my Chitty-Bang-Bang swim pants and bring out my speedos again. Don't worry. It's not a thong. However, it does turn into a wedgie when I get to the bottom of a waterslide. If European men can wear 'em, so can I. No Christianist is going to tell me how to dress. Don't worry again. I won't be walking down Yonge Street with a pair on. It's cold today.

You visit the Blogging Tories every day?

I am a big believer in knowing ones enemy, but that particular destination is something I can take only about once every 3-4 months. Brrrr..

hi skinny dipper...yeah you're right it's those nosey parkers who want everyone to live like them ...horrors. I've never understood why gay marriage isn't seen as something that reinforces the institution of marriage rather than undermining it. At any rate that's the excuse I'm using not to get married !!
And thanks for not using a thong. Most ideas that come from Europe are pretty cool.
But NOT this one.... :)

Hi Omar...well daily is exaggerating a bit. And I usually only read the summaries.But they're not as bad as other right-wing blog aggregates...like Free Dominion....which is Wingnut Babylon....or The Abyss itself.
What strikes me about the Blogging Tories is is how humourless and grim they are. And how frightened they are about everything.
It's like they forgot the difference between trying to stop political change, and trying to stop CHANGE itself. Time moves on and all are forgotten...