Proposition 8: When Gay Anger Spills Over 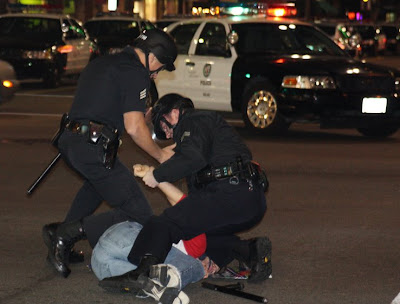 It's not every day that you see gay people clashing with police.

Or marching on Mormon temples.

Or just taking it to the streets.

And I LOVE it.

Because these usually gentle people have every right to be angry. Enough is enough.They may have to accept the bigotry of the majority. But they aren't going quietly and they'll NEVER stop fighting.

Not just because they don't consent to being treated as second-class citizens, and are not about to let anyone put down their lovers ...or their humanity. Like FUCK OFF. Eh?

But because the kind of hideous homophobia that these crazed religious fanatics preach is KILLING gay kids. 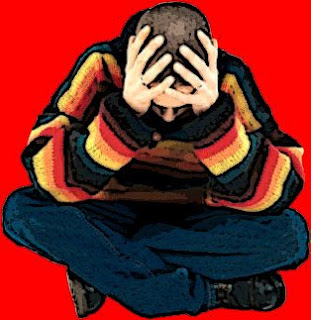 "Until that day, I fear for the lives of your gay sons and lesbian daughters. The ones who can’t talk to you about it, and suffer silently. They’ll be dying for your choice, because teen suicide rates in gays and lesbians is driven by fear, and by feelings of worthlessness that proposition 8 reinforces.

Until that day, I fear for the children of gays and lesbians, who will face ridicule and discrimination at school because their families “aren’t real” and their mommies or daddies “aren’t really married.”

Which is why none of us can stop fighting.

And why of all the signs and t-shirts that I have seen at these angry gay protests. 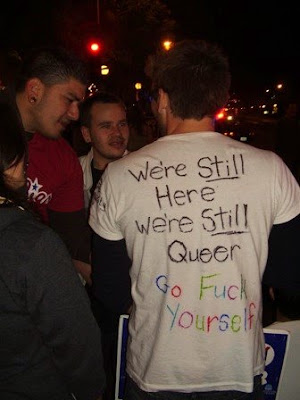 Because that's EXACTLY how I feel.

Those miserable bigots need to hear that message. Loudly.

The other tragic irony in all this is that the Mormons have always been the ones fighting to keep government out of their religion and their marriages. I guess it doesn't work the other way around.

As for the rest of the religious, America needs more Christians like Bishop John Spong:

"Slavery could not be compromised in the 19th century because slavery was finally understood as a moral issue. Homosexuality cannot be compromised in the 21st century because it too is a moral issue. To the threats of parts of the Christian Church to leave if homosexual people are welcomed fully without any distinction, the body of Christ must be prepared to say, "That is your choice but we do not compromise truth to comfort you in your prejudice. The Church's doors will be open when your consciousness is finally formed and you decide to return, but we will not reject homosexuals now to avoid offending you. If the essence of our Christ is summed up in words that John's Gospel attributes to him, "I have come that they may have life and have it abundantly," then the choice is clear. Homophobia diminishes life; it does not make it more abundant. It must be ended; it cannot be tolerated even by making it kinder and gentler."

Reminds me of the Stonewall history lessons ... oh, I forgot we don't learn about such things in school. The community needs to reinforce with its own members the historical struggles and issues like the passage of Prop 8 reignite the fighting spirit in me and I hope it is a general feeling in the community.

Well said, Simon. Stonewall Two coming soon to a temple near you.

I have an odd feeling, though, that the ACLU will be successful on this one. One solid reason for backing Obama is upcoming appointments to the Supreme Court.

Hi Jennifer...you're right about the Mormons it's actually quite ironic. Especially since other religious groups are always attacking gay marriage on the grounds that it will lead to... polygamy :)
And you're right that the world could do with better kind of Christians. I know they exist because my mum is one.
You know treat people as you would want them to treat you etc...

Hi Robert...I don't know if there ever will be another Stonewall, but I do hope it rekindles the fighting spirit of gay people. We have been letting a relatively small group of activists do most of the hard slogging. And after so many battles they are naturally tired.It's up to the new generation to pick up the slack and take it to the street...

Hi Dr Dawg...thanks.I'm glad to see
the Mormon Church is getting to hear how gays there feel. Because of that support the Yes side was able to blanket the state with misleading ads claiming that it threatened children and churches.
And you're right that one of the best things about Obama's election is that he could get to name as many as three new Justices in the next few years.
As for the Watch.Wait.Hope. part...
I'm BRILLIANT at hope.
And lousy at waiting... :)

So much hate on your blog,you need help,and a hug,all of you.