When the Bullies Go After Redheads

I must admit that I found this story really disturbing.

Not just because it happened in the middle of Bullying Awareness Week. And so many kids took part.

Nearly 5,000 people joined the online campaign which urged members to "get them steel toes ready" for a day of booting this week.

Or because as a gay guy I know what it's like to be attacked just for who you are. But also because I'm a redhead too !!!!

Not as red as Anne of Green Gables or this little fella. 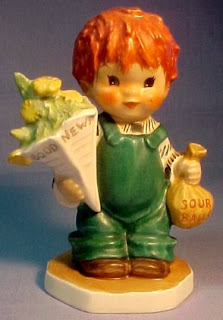 But enough to stick out in a crowd, and when I was a kid to be called carrot head and other names enough times to wish I wasn't.

Which is absurd of course because redheads are not just GORGEOUS, we are practically an endangered species.

Although luckily for the world, rumours of our demise have been greatly exaggerated.

Still it does make you wonder how easy it was to get thousands of kids to sign up to beat up others kids just for how they look. And what kind of nasty gene is buried deep inside all humans.... that can lead to that kind of bullying and this kind of horror.

Buyers from as far away as the Democratic Republic of Congo, Burundi, Kenya and Uganda believe the legs, genitals, eyes and hair of people with albinism can help them achieve instant wealth. The youngest victim so far was seven months old.

It's too ugly and awful. And why I believe that the most important thing you can teach a child is not just to tolerate differences and respect them, but CELEBRATE them as well.

I mean really, wouldn't it be a horribly boring world if we all looked the same?

So I say hurray for the redheads, and the blondes, and those with black, white or curly hair. Or those with no hair at all.

Hurray for the albinos, and all the other colours of the world. Hurray for short people and tall ones and thin ones and big ones.

Aren't we all BEAUTIFUL?
Posted by Simon at 7:17 PM

I would like to think or hope that this was a case of satire misunderstood but I am boycotting Facebook (I do not believe I should be forced to open a Facebook account to see what is posted there) so I cannot make that judgement.

Speaking of albinos - here is one who almost did not make it out of childhood alive. And the world would be a less musically enriched and a sadder place were he not crafting, singing, composing, gathering other talented people like him.

And yeah, I was bullied, too, partly for that and partly for wearing glasses, but mostly for being the brightest little squirt in school.

Like I said before: The nail that sticks out, gets hammered on. Especially if it's copper.

It's odd how something like a single South Park episode can set people off, it turns out that intelligence doesn't get passed from one generation to the next, each one has to learn on their own.

Redheads have always had a bad rap, it must be my Scots heritage that brunette that I am, everything else is red, my beard, my chest, I'm the original burning bush if you know what I mean, but my head has always been brown so I never had that problem, though I saw kids in school who did. Now freckles, don't get me started on that...

Hi RWW...I steer clear of Facebook myself so I don't know either. But even if it was intended to be a joke it's not funny.You don't encourage people to attack other people it's just not RIGHT...

Hi deBeauxOs...thanks for the link.What an interesting story. You know if I live to be a hundred...thanks to your cruciferous veggies. ;) I'll never understand how humans can be so ignorant and cruel...

Hi Bina...hey I said all the others are beautiful but we are GORGEOUS.
And yeah isn't it amazing how many reasons the bullies can find to bully people.
Oh well...now that I've read your blog I see YOU'RE the hammer eh?
Good stuff. :)

Hi Bruce...yeah there was nothing intelligent about that. I presume, although I haven't looked it up, that the South Park people were trying to satirize the idiocy of bigotry. But it sailed right over the head of those dummies.
As for the burning bush... I forgot to mention that I was picked on for being a redhead in SCOTLAND. Can you believe that? Oh well my big brother told me to tell those fools that just because I was redheaded didn't mean I was a Campbell. And that helped... :)

Hi Wayne...good man...it's OK to use the G-word just as long as you pronounce it properly and not GIN-JAH as they say in Scotland. That really drives me batty :)
BTW I'd like to take this opportunity to say I really admire your blog and your work on behalf of the GLBT community.
Thanks...

In a morbid way, maybe it will wake up 'ginger' kids in North America (who tend to only be considered redheads when they're the whitest of the white, despite the fact redheads can occur in darker skinned people) to the fact that *anyone* can be bullied for *anything* should the group-think of others decree it the thing to do.

"Green Eyes, Blue Eyes" without the safety of the classroom seminar boundaries.