The Desperate Cons and the NDP "Plot" 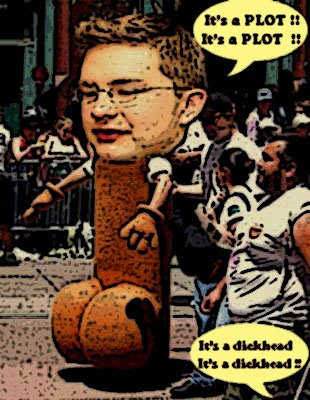 I usually try to avoid watching CTV news, because ever since the Mike Duffy outrage I consider them the broadcasting armpit of the Stephen Harper Party.

But I was flicking through their so-called news channel today and there was the ridiculous little dickhead Peewee Poilievre blabbing on about an NDP plot.

Which was so absurd it really made me wonder about the mental state of the RepubliCons. How could they send out that nasty little prick to talk about ANYTHING?

And why is John Baird acting as Great Chicken Leader's messenger boy these days....instead of just his consort? 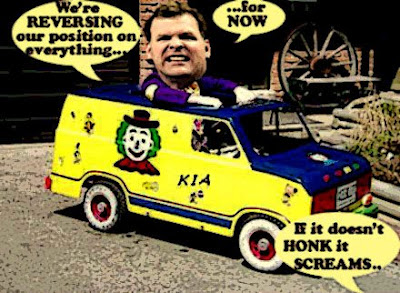 Are these Cons DESPERATE or what?

As for the so-called "plot" who the fuck cares who talked to who first? The only thing it proves is that the coalition was motivated by more than the party funding part of the bill. That some could see where the Harperites were leading this country and were trying to do something to save it. Because you've got to start somewhere. So good for Jack.

And the fact that these Cons are now bugging private conversations after threatening to kill democracy is just ANOTHER good reason to throw these thugs out.

They can scream like rats and do foul ratty things ...while their leader gnaws his nuts off...and wonders what happened? And where did that majority go?

But nothing will save them now.Because NOTHING can change the fact that in a time of economic crisis instead of governing they tried to play their dirty political games instead. They tried to kill democracy, and they put their alien ideology before the real needs of suffering Canadians.

Just like nothing can change the fact that we need a Great Progressive Coalition to save our beautiful country from these scummy Cons even MORE today than we did yesterday.

So my advice is just ignore them. Don't let their desperate screams distract us. Because that's what they want. Concentrate on coming together, and building a great and noble coalition that will show them that we are not just MORE than they are. Many many more. We are also so much BETTER than them.

And that's why they gotta go. Before they turn this country into the kind of sewer where they like to romp and roam. But we don't.

Aren't we lucky that a beautiful progressive coalition is about to be born, to save us from these evil ratty Cons?

Catch them. Squish them.

UPDATE: Does this mean before we overthrow them we can ARREST them?

Great post Simon. It really is a big who f*cking cares moment. That's what the opposition parties need to remember. This news release is straight out of the Rovian playbook.

Harper is better equipped at handling accusations of scandal than those of ineptness. He's been like teflon on every other scandal raised because he recognizes that a steady non-reaction is better politics than an over-reaction. Chretien is also gifted with the same reflexes.

An angry Jack Layton or heaven forbid Pat Martin (Mr. Ethics MP) is the worst thing that could happen when the idea of a coalition government is picking up momentum.

Right now the Winnipeg Free Press (fairly right wing) is reporting 69% in favour of a coalition government. It's been on the rise all day. (And it's now closed.)

Having the media spend the week focused on whether the taping was illegal, unethical or inept (on the part of the NDP) would be a shot in the arm for Harper. It's bait and the whole news item should be buried as fast as possible in my view.

As I said elsewhere, a defensive Harper is his own worst enemy.

Poor Conservatives. They must feel like they're a political pinata on the Hill and everyone's got a stick!

Thank you Simon!!! My sentiments exactly. I'm just watching this "story" now, and it's incredible how conspiracy-freaky the CTV journo-turds are all of a sudden.

BTW, all these sudden reverses are hilarious. If not for talk of a coalition--"secret" or otherwise--what are the odds that we would see these fuckers shifting gears so quickly--or at all?

BRING ON THE COALITION, BABY!!!

Hi Beijing...thanks and I agree with you completely. it's not a good idea to fight these Cons in the sewer where they live. It's much better to stick to the high ground. This sordid bugging is going to hurt the Cons because it makes them look even MORE sleazy.I think most Canadians now see them for what they really are. At last.
We've got them where we want them...

Hi Torontonian...a pinata? Excellent. What a good idea. I wonder if I can construct a pinata that looks Stephen Harper? Something tells me I'm going to try... ;)

Hi Bina...my theory about CTV is that they support the Tories because they want them to kill the CBC. So they can run all that American crap cheaper and get rid of the competition. They sabotaged Dion's campaign in the dying days, and now they are trying to spin this exactly the way the PMO wants them. Too bad the Con PMO won't be able to return the favour.I understand they'll soon be leaving for Paraguay... :)