Me and my New Friend Jules the Robot

As I told you the other day my companion Sébastien is away helping the desperately poor people of Haiti.

Instead of taking care of me and my dog Kerouac.

Isn't that SELFISH of him?

Kerouac has HIS robot to take him walkies and keep him company. 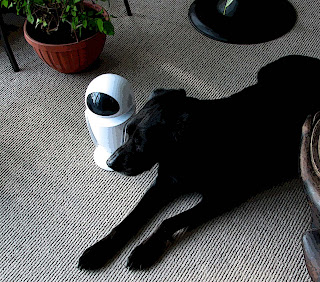 Golly. What will they think of next?

Now all I need to know is does Jules have....um...SPECIAL talents?

And can he iron a shirt?

P.S. On a more serious note.... there are a lot of ways to help the poor people of Haiti....and one way to do that is to support this group.
Posted by Simon at 3:28 PM

Kerouac, you're such a handsome boy!

He is gorgeous Simon. Love his name too.

Hi chrystal ocean...he isn't he? And the best thing is he's the friendliest dog in the world. He never met a human he didn't like. So when there are a lot of people around our walks can go on FOREVER :)

Hi Beijing!! Thanks. You know he isn't a pure lab, and I don't know who his mum and were...I bought him on the spur of the moment in a little pet shop in Montreal's gay village. I really didn't have the $200 bucks or so, and I was living in a tiny apartment. But he was the Walmart greeter of the pet shop, and when I saw how friendly he was, and they put him in this tiny cage where he couldn't even stand up, I thought about it for about half an hour, and then went running back bought him, and carried him home on the metro under my coat.
And twelve years later I can say this for sure: he's the BEST thing I ever bought. And what a bargain...:)