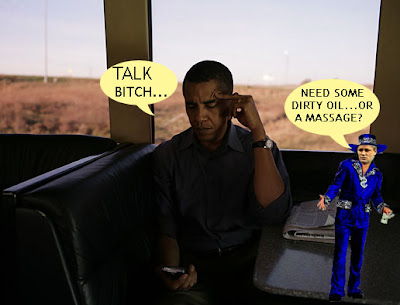 Golly. What a difference a new President can make. Just look at Stephen Harper. A few months ago he was trying to sabotage Obama's campaign. Now he's practically BLOWING him.

In a statement, the PMO described the conversation as a "warm exchange," in which the two leaders "emphasized that there could be no closer friends and allies and vowed to maintain and further build upon this strong relationship."

Gawd. If Great , ,, Humble Pie Leader shrinks any more they are going to have to carry him around in a jam jar for his own protection. In case a hungry pigeon eats him.

Oh I'm sure Obama was polite with him on the phone, while he finds out whether Harper wants to sell him cheap dirty oil.........or the whole of Canada. At a bargain basement price.

But just wait until Harper actually meets with Obama, and comes face to face with his new chief of staff Rahmbo Emanuel.

Colleagues reported that amid a discussion over a celebratory dinner about which political figures had earned the new president's enmity, Mr Emanuel became so enraged that he grabbed a steak knife, stood up and began reciting a list of names, plunging the knife into the table and shouting "Dead! Dead! Dead!" after each one.

Yikes. Something tells me Rahmbo is going to give Harpo a REALLY hard time for trying to shank his boss, at a critical time in his campaign. And for being the Last of the Neocons....and George Bush's little chihuahua.

I wouldn't be surprised if he made Harper crawl around the Oval Office on all fours making piggy sounds.

Oh boy. It's going to be a HORRIBLE spectacle.*Shudder*

I never thought I'd see a Canadian Prime Minister so shrunken, and so HUMILIATED.

But that's what happens when you have a weak Con nerd of a Prime Minister who is on the LOSING side of history. We ALL pay for it.

And you know what? After I swallow my patriotic pride. Gulp.

I think I'm going to ENJOY it. A lot.

The sheen is off Mr Obama following my discovery of his support for the death penalty and his non-support of gay marriage.

Some fucking liberal that be.

I don't know why I am making a comment, this post hardly deserves a response. But you seriously need to check your assumptions! First, the whole 'NAFTAgate' nonesense was a fake scandal based on Toronto Star journalist misquoting Harper's Chief of Staff, and then perpetuated by pro-Clinton hacks at CNN. It was engineered by anti-Obama Democrats in the US. Look at the facts. Second, the US left and right just don't align with Canada's left and right as easily as you seem to think. Harper was very secretive about his views on the US election, but some who are close to him claim he favoured Obama all along. After all, as reformers with broad financial support from individual voters and a practical outlook on public policy they have a lot more in common than people realize. Just watch what happens from here. You'll see Obama agreeing with Harper's long standing policies on political finance reform, the environment, GHG cap and trade, financial regulation, healthcare, Afghansistan, and maybe even Arctic sovereignty.

Hi Omar...yeah I know he's not the Messiah. He's too churchy and his support for the death penalty is appalling. But remember he's a man in America...he's playing on THAT ground.
And it worked. It got him ELECTED, it shattered the Republicans and now he can do what he wants. And because the guy was a community organizer, and a believer in government, if he can keep his Obama army mobilized we might see something....

Hi anonymous...thank you for your response to a post that didn't deserve a response...I agree I am BRILLIANT. :)
And I also agree that NAFTAgate was a cheesy little episode worthy of a Banana Republic. However tell that to Obama. It hit him when he was at a critical point in his campaign, and helped revive Clinton as the blue-collar champion. He knows that Harper and his necons were obviously cheering for the Republicans. So what do you think he's going to think? Eh?
The fact is that Harper and Obama, although they may cooperate on issues of common interest, are at opposite poles ideologically. One is in favour of government, and the other has been a fanatical de-regulator all his political career.
As this economic crisis deepens those differences are going to become even more stark. Unless Stephen Harper turns the Cons into the Conservative Liberal Party of Canada.
Which is what I predict he will do in yet another desperate attempt to get a majority. But if he does that is it a victory for the right or a DEFEAT?
When the hardcore religious base goes its own way, and the more moderate Cons go the other way.
Just like the Republicans are doing now.
I'm hoping...

I'm glad we can agree 'NAFTAgate' was bull, but you seem to be saying Obama will hold a grudge. If that's the best the Dear Leader can do, then I guess he's nothing special after all. I thought Obama is all about rising above the kind of partisan worldview you are flogging, how disappointing its been less than a week and things are (according to you) already back to where they were. Anyway, Democrats know better than anyone the Clinton campaign was behind the charade, I don't see why they would direct any malice at Canada.

Canadian Tories aren't neocons. The NeoCons movement may have built their support on social conservatives, but they are political and economic left-wingers, boardering on totalitarians. Hence the "neo" monicor; otherwise they would just be called conservatives. Obama has attraced many conservative Democrats and conservative Republicans because he actually has some relatively right-wing ideas. I can't agree the Tories were 'obviously' supporting either candidate, if fact there seems to be a healthy mix of support an opposition among Conservative MPs and bloggers. You know, half a dozen cabinet ministers attended the Democratic leadership convention, and I don't know of any who attended the Republican convention.

You say Harper has been a fanatical de-regulator. He's no fanatic, and I challange you to list 3 things he has deregulated.

I do agree there is a left-right idealogical split when it comes to how to deal with the financial crisis. In general, the left favours increasing government spending to stimulate the economy, the right preferrs decreasing taxes, controlling spending, and targeted investments to stimulate the economy. I think its good that this is where the debate is, instead of the engineered scandals, false indignation, hidden agendas, and economic fear mongering we get from the Liberal Party.

The Republicans used those tactics too, and they suffered the same fate as the Liberal Party.

Hi anonymous...well I must say one thing right off the bat...I'm afraid you're a hopeless optimist!!
Normally that's good, but when it comes to the Stephen Harper Party it just doesn't work.
For starters most Conservatives may not be neocons, but Harper is right out of the Straussian think tank school. He just hasn't had the majority he needs to make it happen.
But never mind that...the fact is that thanks to Obama (and Gordon Brown in Europe) and because of the economic crisis, the pendulum has swung back to the government is good side.Somebody has to bail out the banks !!!
Which leaves Harpo who along with his stooge Jimbo Flaherty have always been cut taxes/slash government missionaries, now preaching the wrong message for the wrong times. He can't cut taxes because he's blown the surplus, and calling for smaller government ain't going to win him any brownie points with Canadians. Not when so many are worried about keeping their jobs. Now as I mentioned before I believe Harper could completely re-invent himself with the opposition in such disarray. He could govern like a Liberal government. But again I ask you is that a victory... or a recognition that the right-wing is out of synch with history? And that we can look forward to a generation of left-wing politics.
My advice? Jump over to the left while you can. Despite your deluded Conservative ideas you seem like a nice person, so if you apply for amnesty I'll second your application !! :)