The BNP and the Normality of Racism 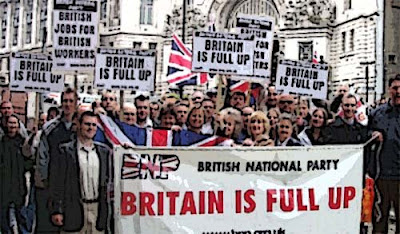 The British National Party likes to claim that it has come a long way from its skinhead roots.

It has toned down its rhetoric a bit and if you check out its website you can find just a slightly more extreme version of the shite you can find on the Blogging Tories every day.

The BNP says that Britain is full and it’s time to shut the door and to kick out all immigrant criminals, bogus asylum seekers and anti-Western Islamists.

The BNP would treat criminals as the anti-social vermin they are, and make deterrence and fair play for victims the fundamental aims of the criminal justice system.

Sound familiar? Are we channelling the Halls of Macaroni and Small Dead Chihuahas or what?

But now somebody has leaked the BNP's entire membersip list and it's panic in Bigotville.

Soldiers, police officers, teachers and doctors were in fear for their jobs last night after the entire membership list of the far-Right British National Party was posted on the internet.

The good news is the racist rats are squirming.

The bad news is that they are EVERYWHERE.

The list describes the occupations of some members that are deemed to be sensitive or of use to the BNP, such as NHS doctor, teacher, journalist, vicar, company director, scientist, engineer or construction manager. Others are listed as public speakers. The list appears to include several former police officers.

My favourite member of this anti-immigrant anti-European party? The prima ballerina with the French name...and the Cuban boyfriend.

The moral of the story....when you normalize racism and make it part of the daily discourse....the poison can leak into the mainstream.

My favourite member of this anti-immigrant anti-European party? The prima ballerina with the French name...and the Cuban boyfriend.

The moral of the story....when you normalize racism and make it part of the daily discourse....the poison can leak into the mainstream

That is indeed what is the most frightening aspect about it -- normalizing racism and bigotry. We are seeing it happen here too.

Hi Beijing...the last time I was in Britain (England) I noticed all those cross of St George flags and it gave me a nasty feeling. Once they were just soccer flags now they are often racist banners.
What's stunning to me is how little it took for them to make inroads into the mainstream of British society. The constant stream of Muslim and immigrant bashing that you see on right wing blogs can only lead to DISASTER in a country as gorgeously diverse as ours...