How Do You Blog About the End of the World? 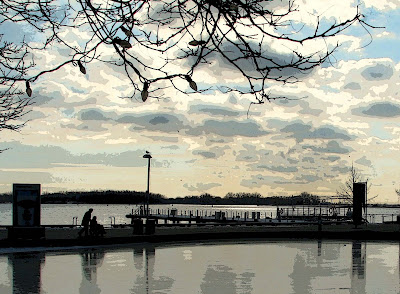 Maybe it was the cold wind blowing across the lake. Or the sight of the empty rink. Or the guy in the wheelchair. But I think I finally realized how much trouble we're in.The signs of the Greatest Depression are everywhere.

Factories are closing down. Small businesses are struggling to survive. Pensions are crumbling. You don't dare walk anywhere near the financial district...in case a broker lands on you. And now the CLINCHER. A friend of mine came back from Disney World and told me the place was half empty.

Can you believe THAT?

But how do you blog about the end of the world as we know it? I almost give up.

Every time I think I've found a new and brilliant approach it turns out to be....um....not so brilliant.

Ouch. I bet that was painful.

Just like it is living in Stephen Harper's Con Canada.

Gawd. How I wish we could do to the Cons what the Democrats are doing to the Republicans. 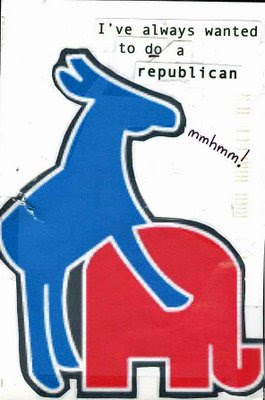 But of course in Canada, WE are the ones getting screwed.

FUUUUUUUUUCK !!!!!!! How come that sucker sailed over Saskatchewan but DIDN'T hit Small Dead Chihuahuas? You know how she's always going on about not waiting for the asteroid? Wouldn't that have been awful? I mean PERFECT.

And for a while it really boosted my spirits. It was just what the doctor ordered...along with lots of alcohol.

But then I thought nah. Who needs that aggro shite? My parole officer says it's bad for me. And Canada these days is grey and bland and humourless and depressing enough... who wants to spend Christmas in prison? I need a more POSITIVE message.


NOW we're talking. C'mon Canada repeat after me: It just keeps getting BETTER.

Being reduced to grinding poverty because Harper's Cons blew the rainy day surplus.... trying to buy votes..... ISN'T the End of the World.

Who needs turkey when we can have PIGEON?

And of course, and above all, and never forget it, Stephen Harper's bestial and incompetent Cons are the government we DESERVE.

Have a great weekend everyone !!!

And as I have been complaining about Layton focused on gaining seats in GTA while playing footsie games with Harper, and the Liberals promising to give us a new Opposition leader when they get around to it, oh yea, next MAY! Seven months from the election. I am with you, depressed about Canadian zig when the world zags politics.

Simon, I'm from Saskatchewan....so I'm glad no astroid hit my beautiful province even though small dead idiots resides here too.

Don't read her trashy blog...not good for the heart or soul!

Look up the video Shine Down on Youtube. That song is pretty decent and is about hope and 2nd chances.

Our Canada will get a 2nd chance. It's like Winter...we need to go thru Winters to appreciate our beautiful springs and summers!

Have a good weekend my friend! :-)

One more thing, Americans, and for that matter, the rest of us,are just agonizing through this slow tedious, day by day, hour by hour, wait until January 20 when for a while at least hope will replace cynicism and neo con ideology. Meanwhile, we have Harper parroting Bush in Washington, now Peru, and no end in sight.
Did you read that Rovian rant about Rae by Tom Flanagan in Friday's Globe? Says it all.

Hi John W....yes I agree with you it seems to me that we are sleepwalking to catastrophe. We seem to have been lulled into complacency by Harper's soothing words. Like the fox telling the chickens that they should sleep soundly because he's there to protect them.I can't believe the Liberals are waiting so long to choose a new leader, when by the end of February things could look very bleak indeed.
And yes I did read Tom Flanagan and his Punic War analysis. And my reaction is the guy should either be locked in a small room at the Fraser Institute, or in a padded cell in an insane asylum.
Because whatever he's talking about this is Canada not some kind of feral state.
But of course the valuable part is that he gives us a good look into the neocon mind, and yet another reason to try to get rid of them as soon as we can...

Hi Nicole !!! Don't get me wrong I love Saskatchewan and I don't blame you for the Chihuahua Factory.
Nor of course would I want to any real harm to come to Chihuahua herself, whose blog I hardly ever
read. On the other hand a nice big hole in her roof would have been EXCELLENT!!! :)
And thanks for pointing me to that video. It's a good one, I've saved it for my collection and don't be surprised if you hear it soon... As for winter...the only bad thing about it is that it isn't summer.
But that rink you see in the photo ...the biggest outdoor rink in Toronto...is open tonight. So woohoo!!! Winter here I come... :)