Stephen Harper and The Canadian Rising 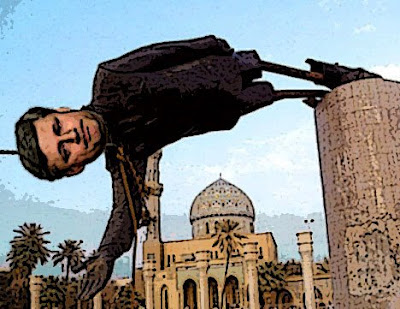 "In light of the government's failure to recognize the seriousness of Canada's economic situation and its failure in particular to present any credible plan to stimulate the Canadian economy … this House has lost confidence in this government and is of the opinion that a viable alternative government can be formed."

I've been staring at that Liberal motion for about five minutes. I can't quite believe it. Can Canada's long nightmare really be almost over? Can the foul neocon tyrant really be toppled?

I see Great Angry Leader knows he's just made the biggest mistake of his disgusting political career. And he's running for cover like a coward.

But it won't save him. Because the representatives of more than sixty per cent of the Canadian people have every right to bring down a government that would put its evil alien ideology before the lives of real people at a scary time like this one. And condemn millions to lives of MISERY.

And because these filthy RepubliCons are trying to kill Canadian democracy so they can turn our country into a jungle. And if tomorrow they don't succeed they'll try it again and again until they do. So they must be STOPPED if the Canada we love is to survive.

As you probably know I've always dreamed about a coalition or a united left, and I've always called Stephen Harper a MONSTER. Not just because he's raped our beautiful Canadian values...turned our Parliament into a fascist sewer....and disgraced us in the eyes of the world.

But above all because he's such a foul stinking BULLY. He can't help it. It's in his genes. And as a gay guy I hate bullies more than anything else in the world.

So tonight I just want to send out a message of encouragement to all the members of the Great Canadian Coalition, who could be about to make this gay boy's dream come true. Tell them not to be discouraged, or nervous, or afraid....but bold, decisive and BRAVE.

Because what they are doing is a great and wonderful thing. And Canada and future generations of Canadians will thank them FOREVER.

And I want to end with some musical encouragement, courtesy of the San Francisco Gay Men's Chorus.

Rehearsing a song called My Rising Up from New World Waking....

Now we're rising up. Because enough is ENOUGH.

A New Canada is waking. Long live our beautiful country and the Great Canadian Coalition !!!!!

Labels: Anyone But Harper, Economic Meltdown, Stephen Harper, The Rising

Yay Simon! I'm trying to stay optimistic. This is the best news I have heard in such a long time.

I can't wait to see Harper's sorry ass kicked to the curb where it belongs. I don't want us to be so desperate that we need to take over airports and/or face the military with guns when we protest our corrupt, undemocratic government.

We have an out and let's hope the opposition parties seize on it.

Well let's just hope Canadian Liberals are nothing like American Democrats. You know they had some pretty sharp rhetoric coming into 2006 too.

I really didn't believe we'd get even this close to talking about a coalition government. It's refreshing! And I've been on permagrin all day!

Best news I've heard in a long time. Harper's band of bullies, racists, bigots and religious nutbars have so completely missed the boat on our disastrous economy that they need to leave as early as Monday. Our local MP, Colin Mayes of Okanagan Shuswap, did absolutely nothing as 300 of his citizens lost their jobs due to American Corruption last summer. I had to publicly embarrass him about his utter caleousness and disregard for the people he supposedly represents, and he still won the riding. This bunch is so incompetent and ought to just resign in shame.

Hi mark !! Just giddy? I've been walking around all hunched over if you know what I mean? With a woody like that one I'm practically a traffic hazard ... :)

Hi Woozie...how could you be so CYNICAL? I'm shocked? Of course they will. ;)
The Liberals are known for campaigning on the left of the centre line and governing on the right. But I think that this time it finally hit them and the other parties. These crazy fuckers really do want to destroy us rather than just defeat us. And I'm hoping it will concentrate the mind....

Hi regina mom...yes it's an exhilarating feeling isn't it.I've been feeling so giddy and not gloomy I thought I was about to have a stroke or something. But it was just the happy thought of Stephen Harper falling off his throne like Humpty Dumpty. Splat.
I wouldn't be surprised if that kind of thought was better than marijuana...:)

Hi Bina...don't worry as I was sacrificing a hot dog today the Monkey God spoke to me and assured me that Harper is DOOMED.
He/She said Harpie will be toppled,locked in a cage and fed a steady diet of Colombian bananas for the rest of his days.
And who am I to argue? Although I did manage to convince the Monkey God to replace those blood stained bananas with dog turds instead... :)

Hi waterboy !! It must be horrible having to live in a riding where those goons and ignorant rednecks rule.
They are absolutely the wrong people to have in power at a time like this. They are too ideological AND stoopid.It's a fatal combination. I almost don't dare think what Canada could be like without them and the gooky Christianists. But wouldn't it be BEAUTIFUL?

Hi Beijing !! I know what you mean it sounds too good to be true. But it just shows what a united left could do. One moment the Cons are in total control and the next moment WE are !!! If we were able to form a coalition, and it was successful, the Cons could be kept out of power FOREVER.
I don't think we'll have to head for the airports...unless the Cons get a majority...but we may have to organize some noisy demonstrations. I just got a new pair of winter boots so all I need is a megaphone and I'm READY !!! :)

Nothing is finished, I am afraid, all this will continue for longer...I am not so strictly against Harper as you are, but generally, I wish a stable, decisive, determined government for Canada. Because this chaos is the worst thing which can be on the political scene right now. But can even the coalition be stable? I wouldn't be so sure...
Best wishes
Elli