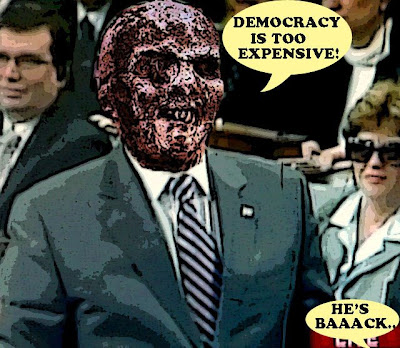 Well it didn't take very long eh? After a month of trying to fool Canadians into believing he was a new/nouveau Stephen Harper, Great , ,, Monstrous Leader is back with a vengeance.

First cripple the opposition, then engineer an election in the Spring....after a budget and BEFORE the Liberal leadership convention. Then get a majority, and use it to destroy the power of government and turn Canada into a neocon jungle.

But why should anyone be surprised after his old economics professor informs us that Great Ideological Leader is a groupie of Friedrich Hayek?

(Crowley) puts Harper in the "Austrian school" of economic thinking, which featured Friedrich Hayek as the great adversary of John Maynard Keynes in the 1930s and '40s. Harper spent a lot of his university years reading Hayek, says Crowley. 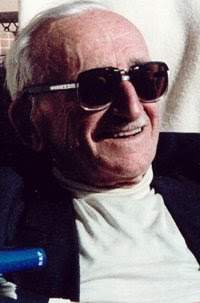 Just like his wacky idol who like most right-wingers couldn't understand the simple fact that humans are fundamentally social animals. And can work together for the common good.

Hayek doesn’t seem to grasp that human beings can exist both as individuals and as members of a society, without necessarily subordinating them to the needs of an imposed social plan (although he acknowledges that the state can legitimately serve social needs, he contradictorily views collective benefits as incompatible with individual freedom). He rejects the very concept of social justice, for much the same reasons that he rejects the arbitrary valuation of labor: in Hayek’s view there is no way to put an objective value on a grievance or to weigh it against other claims. And because he locates all responsibility and agency only at the level of the individual, he sees no way in which any claim can be generalized to society. Hayek’s political philosophy recognizes only negative rights. Positive fulfillment beyond the most basic needs is a matter of individual striving.

In other words he rejects the kind of collective effort that most sane people would agree is needed to get out of this mess AND save the planet.

That's why Hayek is so dangerous, and so is his pathetic acolyte Stephen Harper...the Last of the Neocons. The crazy ideologue from the Calgary AND Austrian Schools. Great eh?

That's why I agree with Robert at My Blahg.

I’ve been against a 3 party (NDP-Bloc-Liberal) coalition government in the past simply because it has always felt to me that creating one was nothing more than an attempt to circumvent democracy. However, in light of this latest attempt by the Harperkhans to once again use the levers of government to attack our democracy I think the three opposition parties should begin formal discussions in order to do just that.

Faced with a threat to democracy like that, from a Hayek groupie like Harper, at a time like this one, for the centre-left in this country to pretend that it's business as usual, is nothing less than INSANITY.

It must form an alliance or a coalition and be prepared to tell the Governor General it is ready to govern in case the government falls.

The Monster is back and time is running out...
Posted by Simon at 12:05 PM

To be fair, I am a Hayek fan as well and I consider myself an Austrian when it comes to economics.

What Hayek was against was coerced social or group action, not voluntary.

Anyway, that being said, Harper is no more an Austrian and a follower of Hayek than Jack Layton is. He is doing everything that they Austrian school would say NOT to do - have a central bank, base money on fiat currency rather than backed by assets (gold, silver etc), bank bailouts by government and extensive government regulation (notice that they parties don't get public money, but they are still barred from getting private or corporate money by government regulation?).

Harper is a "Hayek fan" only in that he see's Hayek's book The Road to Serfdom not as a warning for the future, but as a how-to-book to run his government.

The Conservative party is the largest beneficiary of the political tax credit, which sees donations to political parties reimbursed at least 50% using public money. I don't see Flaherty suggesting that that huge subsidy be revoked. Far from being hit the hardest, the Conservative Party will be the best situated party if this change goes through.

Furthermore, campaign expenses at the riding level are also routinely reimbursed for the larger parties with public money.

If the Conservatives really were that concerned about our money, they wouldn't have wasted $300 million on a useless election.

Having political parties based only on private donations drastically the financial participation of low income persons, and families with dependants to provide for.

This is the best write up I have seen.

Please take time to send a copy of this letter to every opposition party.

I'm one with Robert on this. See my post today,
Now is the time for Working Accord

This "article" is an insult to intelligence itself. Stephen Harper's government does everything opposite to what the Austrian School of Economics teaches. This is a deceptive propaganda aimed at discrediting the Austrian School by falsely portraying Harper as a free-market proponent. Nice try Simon, but you failed miserably. I encourage you to learn Austrian Economics at www.mises.org