The Return of the Reform Party 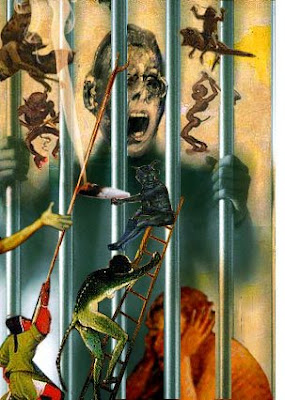 I see the collection of Christianist bigots, sexist pigs, and flying fascist monkeys that make up the Conservative Party base, have voted on their policy resolutions.

And boy are they UGLY. No wonder they tried to hide these monsters. Behold the HORROR of the no longer hidden agenda.

The plan to criminalize abortion through the back door is back. Again.

A delegate from the East Coast bravely makes the argument that this would, indeed, open the door to fetal rights - which gets a cheer, and then boos when she indicates that this would be a bad thing. She’s followed by a man who delivers a hard-to-follow rant in support of the resolution, and finally, a very nervous looking delegate implores the crowd not to make life more difficult for the caucus, or the Justice Minister...

Gender equality is DEAD. And so is the Human Rights Commission.

And here we go. The first speaker starts on a dramatic note - “Imagine this…” he begins, before launching into a flowerily ominous description of how the Canadian Human Rights Commission operates, which is, you will be unsurprised to learn, a threat to the freedom of speech of every Canadian. “Arbitrary punishment and censorship are wrong, and cannot be tolerated in a free society,” he says - the chair urging him to wrap it up - and gets a standing ovation from the crowd.

Because after this EVERYBODY now knows what could happen to Canada if Great ,, Phony Moderate Leader ever got a majority. And now he NEVER will.

All that remains to be determined is what do we call this far right extremist party from now on? The New Old Reform Party? The Stephen Harper Hallelujah Redneck Party? Or the Conservative Reform Alliance Party......or just CRAP?

BTW speaking of crap....and the Human Rights Commission...Can anyone tell the difference between this deranged rant from the absurd Sultan of Paypal... 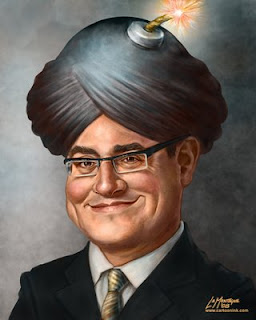 And the one from this right-wing dwarf?

Which is why I find Ms. Lynch's presence at Remembrance Day ceremonies odd. Because Canada's human-rights commissions are diluting and trivializing and thereby offending the very core of the concept that gives them their name.

You know I've always disliked Rex Murphy for his smarmy comments about women....Pamela Anderson's boobs and Britney Spears' EVERYTHING. And for the shameless way he contructs his boring wordy rants from PMO talking points.... or boogah shite from the Blogging Tories. But when he starts channelling Lezra that's the absolute LIMIT.

Hey Smurphy in this country EVERYONE has a right to pay tribute to our fallen soldiers. And those who defend human rights more than most. Because that's what those soldiers died for. So fuck off eh?

Yikes.Sorry about the bad language. But where are those two joined I wonder?

At the head, the hip, or the ASSHOLE ? 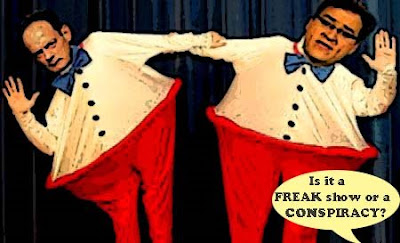 You know fuck this shite. Who needs it? Fuck those creepy right wing monkeys.

This is Canada not Kanada.

It's time to tell those Con losers to get LOST. Take a hike eh?

And RECLAIM our beautiful country...
Posted by Simon at 5:05 PM

And Mr "I would have had us in Iraq in 2003 if I'd been Prime Minister" Ignatieff is NOT the guy to help RECLAIM our country. You know it is easy to wax poetic about how Iggy has recanted his former bent, but the fact remains his war acquiescence was a colossal blunder of Bushian proportions. And this from a guy who is supposedly an expert in such affairs!

Free speech is a great thing to have except when it is used to incite hatred, particularly violent hatred.

Violent hatred is what keeps terrorism alive. Where do you draw the line?

Speech which "encourages/demands" acts of violence, should be restricted at the very least. Similarly speech dismissing acts of violence as exceptable is similarly wrong.

Hi Omar...I'm not taking sides in the Liberal leadership yet. All I'll say is that I agree with you about the Iraq issue. Having read his mea culpa and criticized it,I'm willing to forgive him that one. But what I really didn't like was the way he snapped during the election and said : "The Liberal Party is not a left-wing party."
He may be right but it was the way he said it that makes me wonder how far to the right would he take it?

Hi socially active...I wouldn't call Harper and his gang terrorists but joining this wacko crusade against the Human Rights Commissions tells me where they are coming from.
I'm not saying that Section 13 is worth looking at and if necessary revising to make it harder to file silly complaints.
But these people want to abolish the HRC altogether so they can whip up hate against vulnerable minorities and get away with it.
In such a diverse society as ours the Commissions have a very important role in preventing clashes between different groups. If you remove that security blanket ANYTHING could happen...

The resolution to abolish s. 13 is actually a pretty moderate approach to the speech issue. Moving the issue back to the criminal courts has more to do with the appropriate standard and due process to the accused. The extreme "speechie" position would be to repeal s. 319 of the Criminal Code. The resolution doesnt call for that.

The only argument I've heard against repealing s. 13 is that proving hate under the CCC is "too hard". Ironically, that is the same argument that George Bush used in favour of Guantanamo Bay.