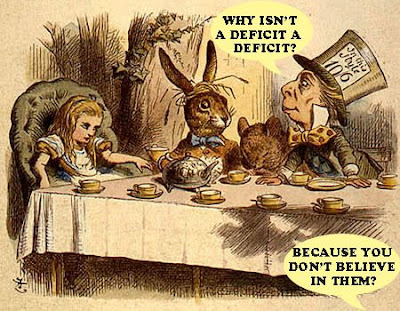 When I watched little Jimbo Flaherty present his so-called economic update today at first I was stunned.

Then I started to laugh. No deficits? Just Surpluses? But no GUARANTEES? Oh no. You don't say. Muahahaha.

It was the Mad Hatter's tea party with Stephen Harper as the Mad Neocon and little Jimbo as the March Budget Hare!!!

It was THAT unreal.

There’s a thin line between a government putting on its best face to stare down a gloomy situation and practicing fiscal delusion. With this document, Finance Minister Flaherty crossed the line.

And then I got angry.

How dare those angry RepubliCons go after the representatives of the sixty percent of Canadians who didn't vote for them?

How dare they play their brutish Rovian political games at a time of crisis like this one?

How dare these inhuman fanatics put their alien jungle ideology before the real lives of frightened and suffering people?

"Everyone was shocked. Some female managers were crying. Everyone else was really quiet. People are just trying to get through the day. It's hard to think about the future."

"I'm too old....How am I going to find a job when everyone else looking for one is young and has finished school?"

Shame on them. Enough is ENOUGH.

I don't know if a coalition government is possible.

But I do know one thing. If we don't move mountains with our bare bleeding hands to try to make it happen we'll regret it FOREVER. And history will never forgive us.

Harper is a radical conservative. Which leaves him helpless to fascist influences. Harper's handling of democracy feels like the early rise of fascism.

Sadly a lot more people support Fascism and the hateful propaganda on which it is based than we like to admit.

Fascism is corruption based on lies which start out as half truths and grow into deceit necessary to the gain and maintain power to protect against mythical enemies both within and outside the state. Worst still concentrated conservative media feels a patriotic duty to protect the naive public. Lies are not exposed but added on to, until fascism is embraced and suppresses resisters as internal enemies.


This is a path to economic and political corruption and national destruction.

HOW MUCH has the private sale of the 407 cost the public through increased travel cost either directly or over crowding the 401?

The 407 was sold and is the gift that keeps giving. This corporate monopoly generates the kind of money that can buy a lot more advertising then families trying to make ends meet. But it cost us all and makes us less economically efficient.