Proposition 8: Between Anger and Hope 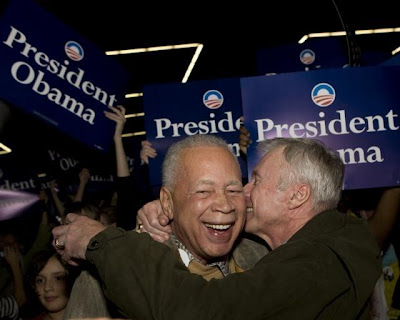 I wish I still felt like this gay couple did after hearing that Obama had won. But twenty-four hours later the party feeling has worn off.

After what happened here.

California's black and Latino voters, who turned out in droves for Barack Obama, provided key support for a state ban on same-sex marriage.

Exit poll data showed seven in 10 black voters and more than half of Latino voters backed the ballot initiative, while whites and Asians were split.

I expect that a lot of old white bigots would vote against gay marriage. They are prisoners of their past.

What I can't accept is that people who have suffered the pain of discrimination, like black people have, should vote to inflict it on others. That's not just wrong. It's OBSCENE.

And although I understand where it comes from:

Religious voters also were decisive in getting Proposition 8 passed. Of the seven in 10 voters who described themselves as Christian, two-thirds backed the initiative.

It can't be excused or denied anymore. Which leaves me, and many others, somewhere between ANGER.

I’m not sure what to do with this. I’m thrilled that we’ve just elected our first African-American president. I wept last night. I wept reading the papers this morning. But I can’t help but feeling hurt that the love and support aren’t mutual.

I do know this, though: I’m done pretending that the handful of racist gay white men out there—and they’re out there, and I think they’re scum—are a bigger problem for African Americans, gay and straight, than the huge numbers of homophobic African Americans are for gay Americans, whatever their color.

It cannot be denied that this feels like a punch in the gut. It is. I'm not going to pretend that the wound isn't deep and personal, like an attack on my own family. It was meant to be.

In this battle we have already had far more defeats than victories. But each time, we have come closer to our goal. And in the hearts and minds and souls of so many, we have changed consciousness for ever.

As for the Mormon Church that bankrolled most of The Discrimination Crusade.....even though they too are another group that should know better.

They now seem to want gay people to forgive and forget.

BTW have the rest of you had a chance to catch this little horror show yet?


Because for 18-thousand married couples in California, and thousands of others who were hoping to tie the knot one day, that's what it FEELS like today.

Forgive? Forget? After hurting all those people. And ruining my Obama party.

I was on the Courage Campaign's mailing list and they put up an amazing fight to defeat Proposition 8.

The fact that it passed is a huge blow, especially in one of the most liberal states in the US. Other States passed laws impeding gay couples from adopting children. It's all so freaking sick.

You know what marriage I condemn? The marriage between church and state. That is what is driving all these bigoted propositions.

Obama's election marks a historic date for those who struggled for civil rights for African-Americans. I'm happy for that and I empathize with their joy. But I am pissed off that one minority cannot relate to discrimination against another minority. And that includes the President-Elect.

Women dodged a bullet this time on various State-sponsored propositions to limit their reproductive rights. But the LGBT communities in the US were slapped in the face. It's disgusting.

May the Mormon Church and all churches lose their undeserved tax exempt status. They are despicable people.

This passing of proposition 8 is a disgrace. However, I'm not that stunned that oppressed people cannot relate to other people oppression and suffering. Think of what some jews did to the palestinians when they decided to settle in Palestine and kicked out the british.

Unfortunately, humans have a tendency to behave nicely to those of their group, while being able to act like barbarians towards those on the "outside". Think of all the suffering inflicted by supposedly moral persons on "infidels" or "savages", in the name of their church,,,

This being said, the fight must go on to make humanity a worthwhile species...

I felt sick when I heard. This is why the courts need the final say over issues like this - to do what's right and fair for all instead of what appeals to the majority's basest fears and prejudices.

I know that Obama has stated that he doesn't favour same-sex marriage, but perhaps with a re-balanced Supreme Court there might be hope for a national ruling that would stick and that wouldn't be fought by the White House.

I also think that the black and hispanic communities would benefit from having some strong role models like Ellen (seriously - name one black gay celebrity besides RuPaul). Familiarity dispels fear, and people like Ellen Degeneres have made huge strides in making average Americans more comfortable with the idea of homosexuality and gay marriage.

Weird but true - television is a substitute for actually knowing gay people.

Oh, they all know gay people outside the boob tube, Miz Jennifer, they just won't admit it, no more than many of the gay people themselves will admit is kept in their hearts and closets.

Perhaps something like this will encourage more pan-sexuals to come out and speak out. Staying quiet is proving to just empower the "Jim Queer" laws to intimidate them even more. Reconstruction after the American Civil War brought 1870s Civil Rights laws to people of Colour. But by the late 1880s, Jim Crow laws beat those into the legal ground.

'Gay panic' murder defenses, equation with pedophilia, no access to adopting, no marriage legal rights, even a simple ability to gather in public outside 'segregated' spaces without fear of 'public morality' mobs?

The corollaries are beyond miscegenation. And anyone who thinks such misled bigotry is separate from other minority rights is whistling in the dark.

I guess all we can do in Canada is continue to show our equal marriage society is as fabulous as Mourrisseau's Androgyny mural and mobilize the Underground Wedding Industry for the defiant.

Hi Beijing...yes it's very disappointing. And it sure ruined my Obama party :(
But hopefully we'll pick ourselves up and move on. I know we will we always do. And yeah the Churches had a lot to do with it. Most of it actually. The good news is that younger people voted overwhelmingly against Prop 8 so we will get there in the end....

Hi BC Waterboy...yeah it would be nice wouldn't it? I don't mind what these religious fanatics say about me in their Temples and Churches or Mosques or whatever. They can say I should be dipped in "holy" water, breaded and baked and I don't give a shit. It's their problem. But when they take this shit into the public arena nd force their views on my rights then I have a problem. Church or political action group? They should make up their minds and if they can't they should be taxed...

Hi Enkidu's palace...it's a very distressing situation to see one opressed groups vote to take rights from another. It's also a very complicated one. There are a whole host of reasons why the black community is so homophobic but mainly it's the influence of the black churches...who for historical reasons play a big role in the black community. It disappoints me deeply, but it would also disappoint me if gays blamed blacks for what happened...as I'm afraid some are...because there were a lot of white homophobes who really killed Proposition eight.
But as I said above the youth vote was overwhelmingly against Prop 8 so the world is slowly changing for the better. It's just that when it comes to human rights for ANYONE I'm really impatient... :)

Hi Jennifer...I agree I don't believe human rights issues should be put to a vote.
And the supporters of Prop 8 did appeal to the most base emotions by making it sound like gay marriage would threaten kids or religious freedoms.
The good news is that Obama might get to name three new Supreme Court justices in his first term alone, and that could have a huge impact.
As for black homophobia it remains a huge problem. Not just for gay people but also for black people, because it's contributing to an AIDS problem which is taking or ruining too many lives. And black celebrities who are gay are too scared to come out because they fear being ostracised by their own community,.
I also wouldn't want to dwell too much on this subject, or focus the blame on black people because the white homophobes were the ones who really did the damage,and because emotions are a little raw right now and everyone should just chill.
And then hopefully we can have a good conversation about how to bring people together. And move on...

Hi Niles...yes I know I feel like that too. When you look at the number of disappointments and lost battles the gay community has had to endure it's depressing...and I'm not surprised a lot of gays are saying or feeling that enough is enough. The bad news is that the United States remains, thanks to the influence of crazy religion, a deeply homophobic society. And it will take time for attitudes to change. But change they will.
And yes I agree we MUST show them how fabulous we are... :)