The Throne Speech, the Brassiere, and the Cat on the Roomba 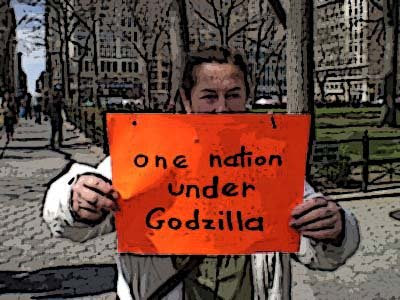 Gawd. What a SCARY Godzilla of a day off.

The other day I was joking about my gay gorgeousness. But what I really meant to say was that I'm just glad I look so good without having to go to the gym five times a week like all my gay friends.

Even if I have to put on shades.... and turn down the lights.

But what I also didn't say was the reason I don't like going to the gym too much, is because I've always had this irrational fear about over developing my pectoral muscles.

And know I know why.

OMG. Or should that be Mammary Mia?

The only thing scarier than that was watching Stephen Harper's Throne Speech.

And realizing that he doesn't have a clue what to do.... or where this country is going.

Like a government-killing neocon who has run out history.

Or a cat on a Roomba.

Gosh. Wouldn't it be great if we could put a brassiere on Harper?

And put his rotten little Finance Minister Jimbo Flaherty on a Roomba.... 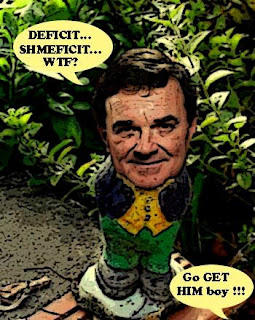 And have it chased by a hungry hound.

Simon, you are sooooo right.

One thing about Flaherty.

I've always wondered who has to carry around the milk carton he has to stand on to reach the microphones.

I pity that poor flunky.

But seriously, what do we have to do to get rid of these pricks BEFORE they destroy everything we love about Canada.

What the heck is a Roomba, and where can I -- and my three cats -- get one?! The video made me howl!

Whoever stole the "fun" from the fundamental...ists, was/is bonkers -- batshit miserable for their lack of joie de vivre!

Great site, Simon -- I found you via Runesmith's Canadian Content.

Hi DeBeauxOs...my position is like Rosa's...if I can't dance at this revolution I'm not interested. :)
BTW I LOVE your new blog. Those loafy cats are too much. I'm going to add it to my blogroll immediately...

Hi Torontonian...that horrible little Con. The one the thug Mike Harris used to carry around in his pocket. Did you know that flunky is also a serious theocon? When he brought down his first budget the despicable Christianist McVety was his invited guest in the Commons.
After the damage he did to Toronto, the fact that he's the Finance Minister at a time like this is nothing less than a horror show...

Hi Beijing...it was good wasn't it? As for how are we going to get rid of these Cons you know what i think. I believe the left should form some kind of a coalition. Put aside our differences, get rid of these monsters before they do any more damage, and get back to fighting ourselves later.But you know me eh? Dreamer... Dreamer... :)

Hi Jaliya...I believe it's a robot vacuum cleaner you just turn it on and it moves around the room, and under tables and beds, until it's done and then it turns itself off.
I'd get one for my place but I'm afraid it would make my lab run for cover !!! I have a little toy robot and as soon as it starts beeping and moving around he scoots and hides under the bed.:) And thank you for your kind comment Jennifer is great...

Hey Simon! The DAMMIT JANET! gals love you back.

So get our name up on your blog roll pronto monto already.

Hi Torontonian....isn't that scary?
Little Jimbo could be walking across the sofa and McVety could SIT on him...oooh ugly...what a mess. They'd have to scoop him up with a spoon... :)

Hi DeBeauxOs....DONE. And after reading that post about veggies and smoking I ordered half a ton of broccoli. Ugh.
I hope you're satisfied... :)