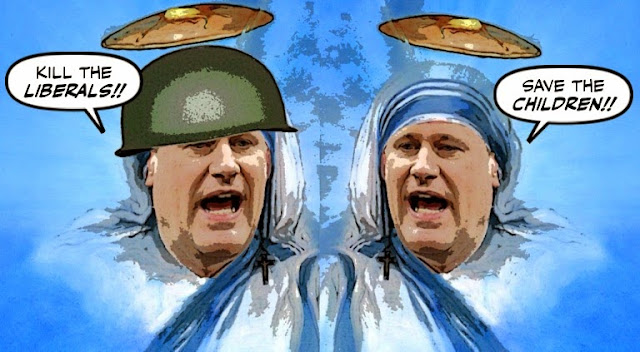 Well as we know only too well and too painfully, Stephen Harper has many screaming voices in his head. And he likes to play many roles.

But now, if you can believe it, he's posing a Great Used Car Salesman Leader.

Trying to scam the gullible into believing he's a consumer champion !! 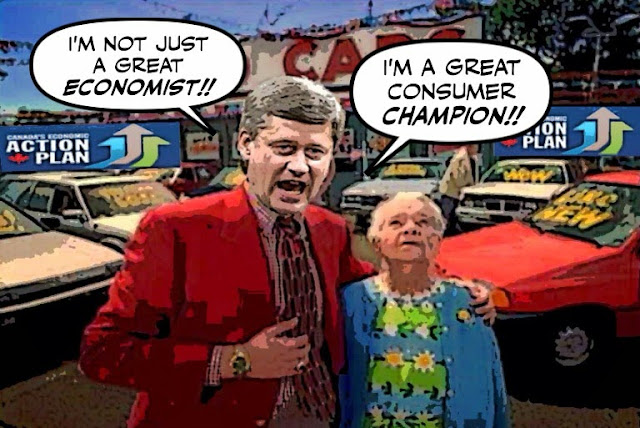 Even though the claim, as Jeffrey Simpson points out, couldn't be more fraudulent or LAUGHABLE.

You really do not know whether to laugh or cry at the Harper government’s repeated and foolish efforts to be seen as the consumer’s friend.

This is all so patently ridiculous as to present the option of tears or laughter. Think about how many items that come from the United States are available in stores, how many U.S. services exist for sale in the market, how many U.S. products are sold daily in Canada.

Now think about a small bureau in Ottawa, with plenty already on its plate, going into the market to check this or that item’s price, and then trying to determine whether somehow discrimination exists.

Just another attempt by those shameless Con artists to try to scam us or brainwash us with OUR money.

As only the Harper gang can:

Previous governments, of course, have resorted to the government’s kitty to pay for ads bragging about themselves. But none has ever spent more money, stretched over such a long period of time, to promote itself, without showing the slightest bit of shame for this abuse of “hard-working taxpayers’ ” money.

But then of course, Stephen Harper can't pose any longer as a Great Warrior Leader.

Not after leading the nation to war from the safety of a closet... 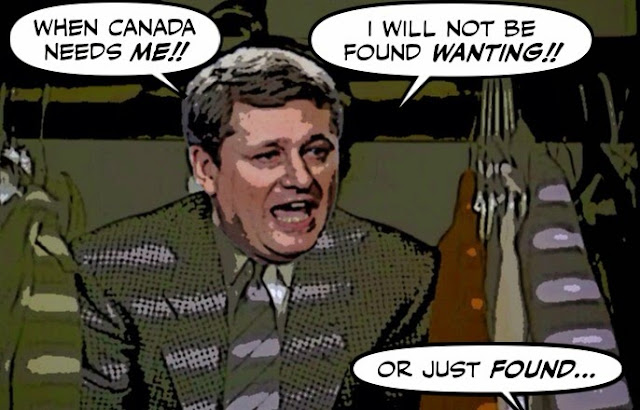 Nor can he pose as a Great Economist Leader. Not after the Great Oily Apocalypse and Stock Market Meltdown.

And not with this pathetic record.

A staggering 14 per cent of the population is now considered low-income, according to Statistics Canada. A closer look reveals that this includes one out of every six children (16.3 per cent). Many are single-parent families, usually headed by women. And among seniors living alone, close to 30 per cent of them are low-income.

By any definition, these are incredible numbers that tarnish the reputation of this country. We have failed colossally at providing for our fellow Canadians. With numbers like that, we can no longer call ourselves a prosperous country.

So he really has no choice but to go out there with Big Jim Moore, to try to fool Canadians into thinking that the Cons are consumer champions... 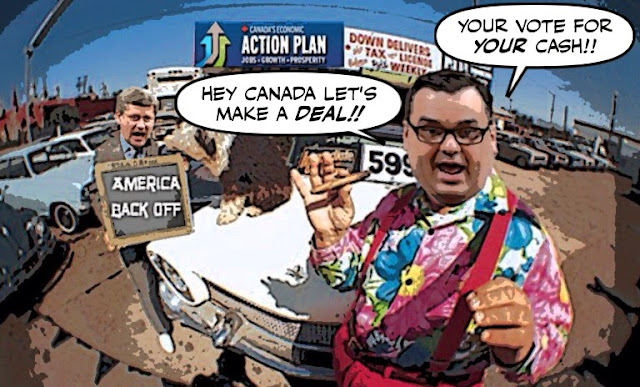 Instead of the sleaziest gang of Con artists this country has ever seen.

And the good news? I don't think this latest scam is going to work either.

Canadians have seen it all before. They know you can't trust a Con as far as you can spit. Not when they know the sinking Harper peso is going to make imports more expensive not cheaper. 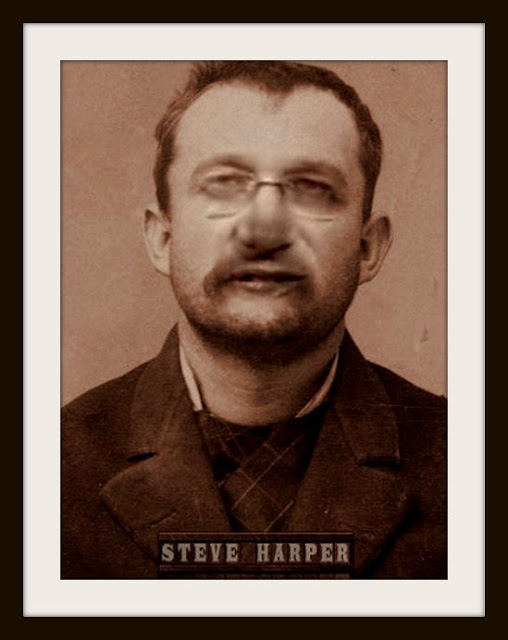 But of course, there is a big danger. And that is that the Cons may try to scam the next election. 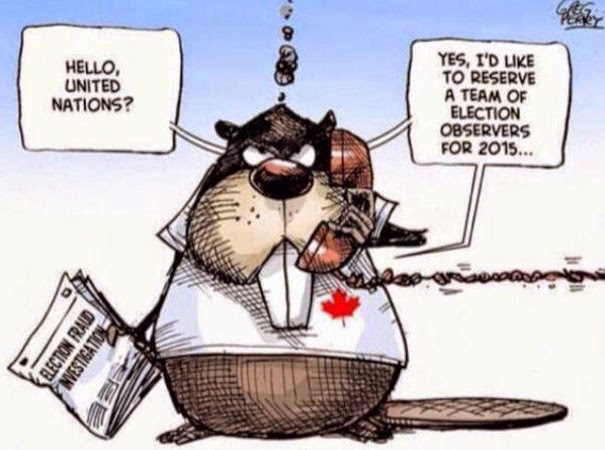 So that at the very least we can draw attention to the issue, and embarrass him further.

The Con artists are looking desperate. Their luck has finally run out.

And we are going to destroy them...

Y'all come on down to Crazy Crazy Steve And Laureen's Emporium. Just drive on down Sussex drive and turn left at the Governor General's place. So come on down - a free budgie with every purchase!

hi anon....thanks for the link. I love that SCTV stuff. But I really can't have any budgies delivered to 24 Sussex Drive. Good ness knows what he might do with them. Kitten abuse is bad enough... ;)

We "can't trust a Con as far as you can spit" is a great line in my book! O to read the minds of those who think SH is "GOD"!

Today's conscam puts all the others to shame. Hurry up and do a piece on it so I can put it on line.

Steve has been weighed and measured and found wanting not fit for human consumption eh?

American goods are sold here for more, because it cost American businesses more to sell here. It just isn't that the American goods cost more, but those AMerican goods, are sold to stores or middlemen, who re sell. Canada has taxes which provide medical care, something the AMerican's don't have. Canadian police officers are better paid than Americans as are fire fighters. So there is a cost to living in Canada, get over it or move.

Yes you go to Target in the State of Washington and pay less for the same item on sale in B.C., but the item came from China or some other country. The staff in Washington are paid less than those in B.C. Then again there are fewer taxes in Washington State, so if you want the life style Canadians have, you pay for it and hence the higher cost of goods and services.

harper and his cons are simply trying to con the people of Canada with their ads. there is no way they can insist a company sell goods at a specific price. like give your head a shake, what next, stores have to sell items for the same price they sell them for in China. He tries to pass this law, they'll be in court again and guess what, they'll loose again. harper is a looser.