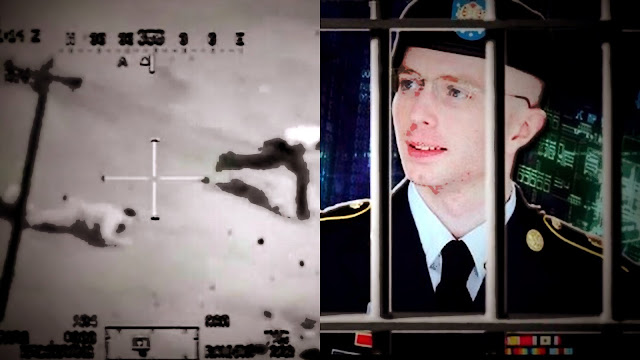 It's been five years since the young American soldier now known as Chelsea Manning began downloading hundreds of thousands of Pentagon files.

And in the process not only revealed the horror, the brutality, and the hypocrisy of the wars in Iraq and Afghanistan, and the diplomatic world. But also the U.S. intelligence machine's most closely guarded secret.

That in order to spy on their enemies, they would now spy on us ALL.

For that, after being treated in brutal fashion, she was sentenced to thirty-five years in prison.

Today Chelsea turns 27, and I found these birthday messages from writers, artists, and public figures from all over the world, incredibly moving.

Like the one from Edward Snowden, who has paid such a high price himself for the "crime" of telling the truth.

Happy birthday, Chelsea Manning. I thank you now and forever for your extraordinary act of service and I am sorry that it has come with such an unbelievable personal cost.

Or the one from the philosopher Slavoj Zizek:

We often hear that today’s radical left is unable to propose a feasible alternative. What you did simply was the alternative. To quote Gandhi, you were the change you wanted to see.

This is why, when I am asked about freedom today, the first answer that comes to my mind is: Manning is free, much more free than all of us who are “free” to choose this or that cake or drink, holiday destination, etc. You confront us with our freedom when we would sometimes prefer to ignore it.

Or the poet Saul Williams' salute to what he calls her "wayward flag."

I know that you have been called names like “traitor” and a host of others, but please never forget that for many of us who guard the flame that will one day burn the injustice out of empire you are a hero. Your actions have sparked more than global unrest, they have sparked the imagination of artists, engineers, teachers, and activists. You have given hope, even when those who would punish you for your actions remind you of your oath to God and country, your actions have reminded us that God would not favour countries more than humanity itself.

And of course this message, as humble as it may be, from Peter Tatchell and Chelsea's own LGBT people... 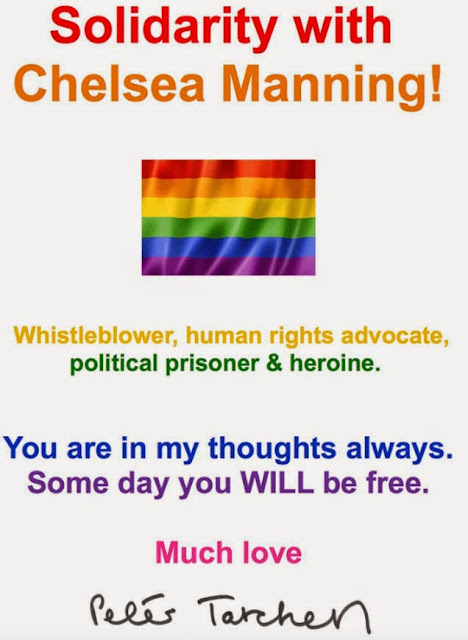 You know, as one who lives in a country run by a vicious cult and a depraved leader who seeks to muzzle his opponents and bury the truth, I am always saying that only the truth can set us free.

And there are none I admire more than those who would sacrifice their own freedom to stand up for that eternal truth.

I also realize that sadly some will not be able to see beyond Manning's transition, being blinded by their own bigotry. As I'm deeply ashamed to admit I once was about the transgendered. Blinded by my ignorance.

But according to Wikipedia, this is how she sees herself... 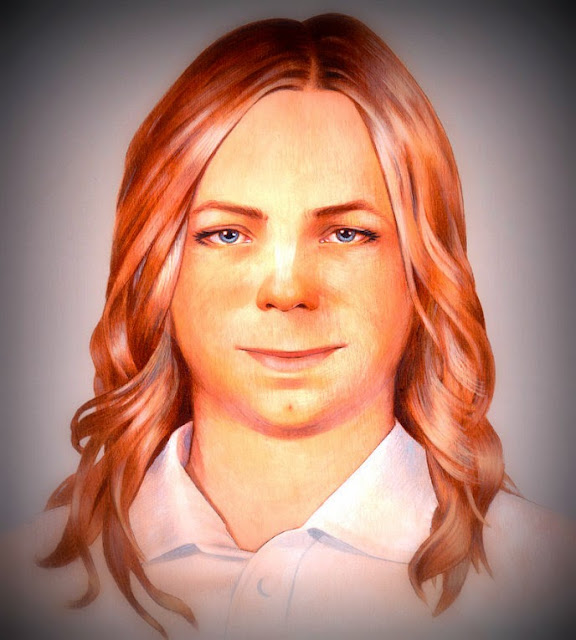 She is beautiful. She is brave. She is a hero.

And the truth WILL set us free.

As hopefully one day it will free her.

Chelsea Manning sits in a jail cell for doing the right thing. The ones who did the wrong thing still walk around free. It is hoped some day those will be put on trial and Ms. Manning will go free.

hi Steve...yes, the way she has been treated is simply unforgivable. But had it not been for her, and the other heroic whistleblowers we would still be wandering around in the darkness clueless about what is really going on. I hope Canadians understand what is happening, or they will live to regret that blindness...

hi e.a.f....I am not optimistic that we will ever have justice. As far as I know none of those responsible for the war crimes Manning revealed has ever been charged. But at least the criminality she exposed can never be put back in the bottle. So if the courts don't condemn them history certainly will...

hi Kathleen...I always liked that quote, even before the Cons came to power. But now that I've seen how they have tried to muzzle and bury the truth, it's practically my guiding principle....