Stephen Harper Sells Us Out To China. Again. 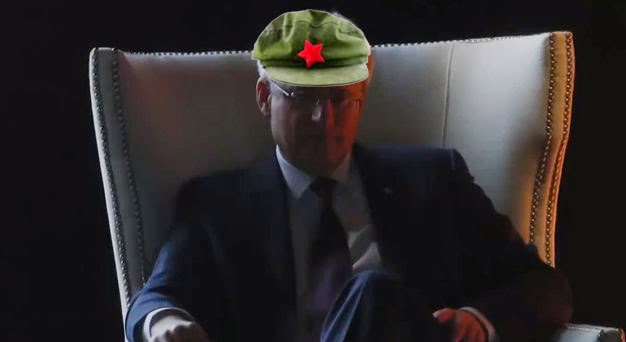 Well now it's official. Now you can call him comrade Harper. Or Great Yum Yum or Dumb Dumb Leader.

Prime Minister Stephen Harper’s government quietly signed a customs-sharing agreement with China without announcing it to the public, Global News has learned. And the move has experts worried about the consequences to Canada’s security.

Because he's done it again. He's been caught selling us out to the old men in Beijing. Surrendering our information, to those who could use it against us, and who have been robbing us BLIND.

“China has for years been doing a tremendous job of stealing some of our technology,” said Garry Clement, a former RCMP superintendent with 30 years in the force.

Experts such as Charles Burton, an associate professor of Canada-China relations at Brock University, are asking why Canada is ready to share customs information with a government that is trying to evade our border cops.

And been caught trying to hush it up.

But then who can be surprised? When his "triumphant" trip to China turned out to be, as I pointed out at the time, considerably LESS triumphant than advertised... 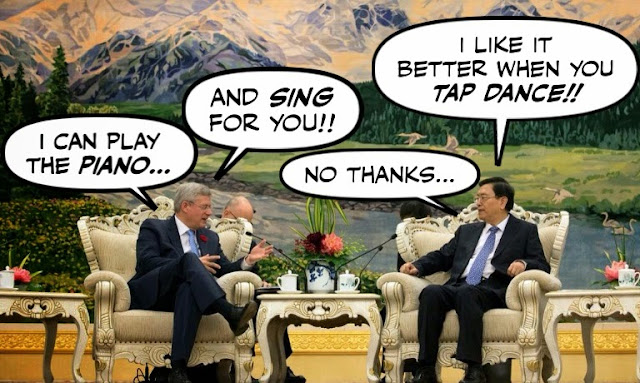 Only got worse as it went on... 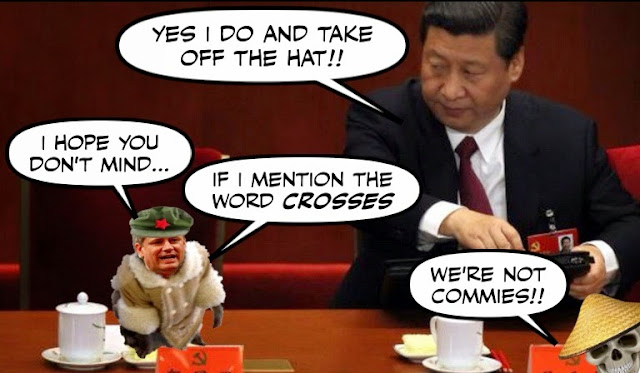 And came so soon after his infamous FIPA deal, which sacrifices our sovereignty to China for at least 31 years.

So he couldn't get any lower if he tried, in his never-ending crusade to flog his oily goodness like a Bible salesman.

And the good news is that we can use all of this against him, because it's got EVERYTHING we could possibly need to demolish his phony credentials as a Great Economist Leader.

It makes him look like either a hopeless incompetent, or a Chinese stooge. And his attempts to hush it up only make him look even more sleazy and devious.

Not a man Canadians can trust, with their money or their e-mails. 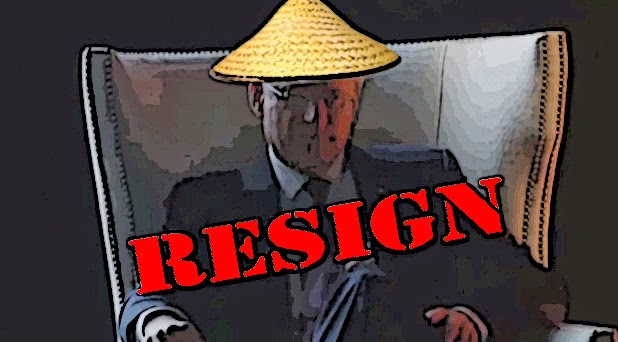 That's called TREASON, Simon. What harpie is doing is committing TREASON. Don't be so afraid of the word. Millions of real Canadians need to hear it. The u.s. will soon be looking our way with a jaundiced eye as a very real and possible threat to their NAZIonal security because of our overt alliances with China.
What a great day for us. harpie whining about our lackluster economy while setting us at odds with the two largest economies on earth. He couldn't be more of an asshole if he prayed to the asshole god for guidance on how to be a bigger one.

Yes giving away technical or government information is defined as treason in the Canada Criminal Code:

Section 46 (2) (b) without lawful authority, communicates or makes available to an agent of a state other than Canada, military or scientific information or any sketch, plan, model, article, note or document of a military or scientific character that he knows or ought to know may be used by that state for a purpose prejudicial to the safety or defence of Canada;

He's signing his own death warrant, I'm telling you this now, if the red's have their way they'll put him in front of a firing squad the moment he opens his mouth and says the wrong thing, and they'll replace the prime minister of Canada with some old toad out of the red capital, and declare Canada a Chinese economic development zone.