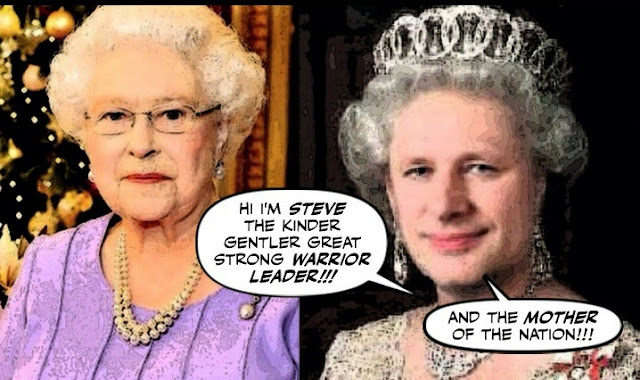 Well I knew that Stephen Harper's Christmas Message was up against some tough competition.

And I knew that he would do his best to try to look as non threatening and non-partisan as the Queen, in his new role as Great Kinder Gentler Leader, the benevolent  ruler of Canada.

But unfortunately for him, he just couldn't pull it off. It wasn't even close. The Queen's show was at least classy, and suitably christmassy. 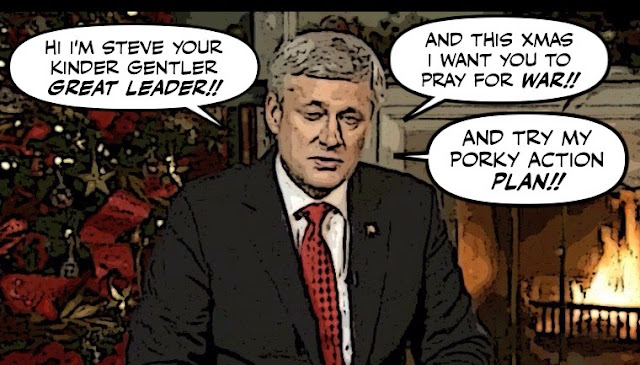 In his annual Christmas message, Prime Minister Stephen Harper asks Canadians to pray for members of the military as they battle Islamic extremists in northern Iraq.

Harper said Canadians are doing what they are known for -- "protecting the vulnerable, promoting peace, and defending the freedom of all people."

Tacky, because only Stephen Harper would use a Christmas Message to try to whip up war fever, just because it helped give him a big boost in the polls.

But is now slowly fading... 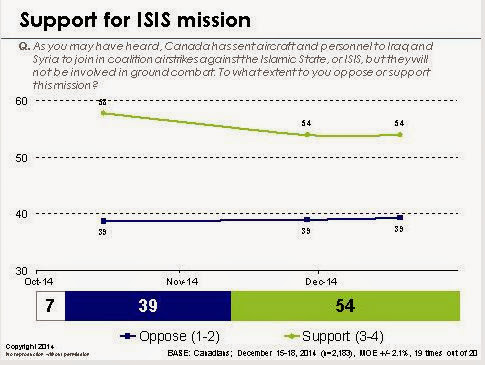 Along with his polls.

So he needs to kick it up a notch. Praise the baby Jesus and pass the ammunition !!!

Pathetic, because only he could turn a Christmas Message into another squalid Porky Action Plan ad.

On the economy, Harper said that "despite the difficulties elsewhere in the world," more Canadians have more opportunities and better jobs than at any time in the country's history.

Even though the only reason there are more jobs now than at any time in history is because there are more Canadians than ever before. So he's using a Christmas message to scam Canadians like a Con artist.

When there aren't enough good jobs. He isn't creating any, he's been killing them for years. His tarry dreams are tanking.

And he's no Great Economist Leader... 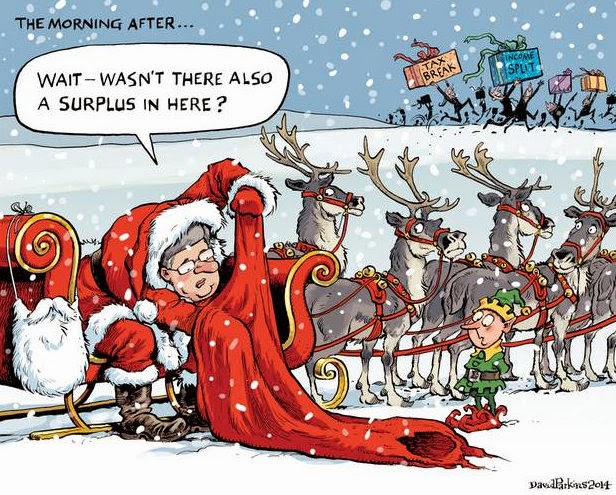 Just a shabby Con trying to buy an election with OUR money.

But what I find most disturbing about Harper's Christmas message is that he still seems to think he can fool Canadians into believing that he is a caring compassionate man.

Harper also said that while we live in a beautiful, compassionate and prosperous country, we should "show kindness to the less fortunate" in the spirit of Christmas.

Which can only mean he must really think we're fools eh? Or he's finally gone over the deep end.

Because there has never been a less compassionate government, or a less kinder and more morally depraved leader.

And when 60 percent of the population is either angry or discouraged with him... 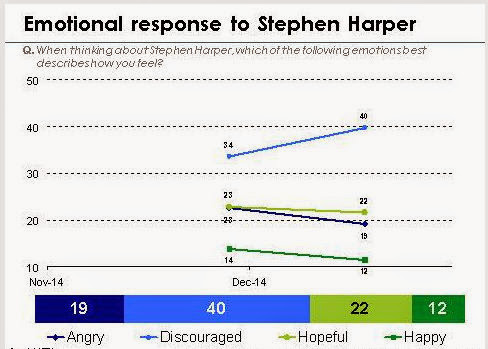 And even the Globe Editorial Board, which endorsed him so enthusiastically before the last election, now wonders whether he is a liability.

The Prime Minister is not someone you want as a friend, politically-speaking, and much less someone you’d want as an enemy. He fights ruthlessly and without remorse. He dumps inconvenient allies, sows division with abandon, treats Parliament with contempt and works 24/7 to control what Canadians know and hear about him, usually through the hearty application of muzzles and misdirection.

But, in 2014, the Prime Minister’s bloody-mindedness began to feel like a liability. With him as leader, the party has consistently trailed Justin Trudeau’s kinder, gentler Liberals in the polls in spite of the country’s relatively stable economy. If the Conservatives under Mr. Harper lose the general election next fall, this year may be remembered as the one when Canadians, including members of the Conservative Party, decided their leader’s ruthlessness was no longer worth the cost.

He must surely see where this one is going.

The writing is on the wall, and that's why he is looking and sounding so desperate. Or slowly going crazy.

And why his nightmare Christmas show looked to me a lot like this one... 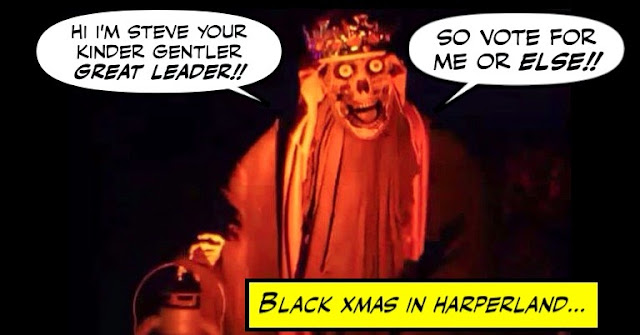 Like the last desperate act of a Con Zombie, caught in the headlights of history.

Time is his enemy, he's been around for too long.

He can't change who he is. We know him too well.

And his monstrous act will soon be over...

"He can't change who he is".........awesome statement, Simon. According to "Party of One" by Michael Harris, we just need to research who he was as a younger person to realize that your statement speaks volumes.

People who have worked with him or been in his company, all more or less, say the same thing about Stephen Harper.........NOT TO BE TRUSTED! I feel for his wife and children.

The Queen's message about the Christmas Truce would have been unthinkable a century ago. The King (and the Kaiser) and military leaders would rather have had the lot of them all shot.

The Pope's message was quite acceptable as well; obviously the Vatican is not about to change its official line about abortion, homosexuality, women or married priests, and the rest of that patriarchal crap, but the call not to judge is rather astonishing. No, I will certainly not become either a monarchist or a practising Catholic, but are they listening to their public's mood?

Harper should be taken out to the barn and taught a lesson listen MF Harper you can not continue in the path you are on no Fing wonder some deranged man came to shoot you?

Couldn't even stand looking at the weirdo. Protecting the vunerable, must just be con vunerable, because he certainly isn't doing anything to protect the First Nations women in this country. There are 1,200 of them murdered/missing and an inquiry isn't "high on his radar". Democracy, give me a break. He passes leg. to diminish our democracy and then gets it over turned in the Supreme Court of Canada. Now he is trying to stack the courts with incompetents.
The guys a joke. bad make up, worse lipstick. word of advise to stevie con, when your lips are shrivelling don't wear that shade of red. its just so ugly. well sort of like your soul, given 1,200 murdered women aren't on his radar.

As to jobs, hell come to b.c. and we can talk about unemployment and under employment. Part time work when people want full time shifts, is still being unemployed.

And lets not even get into how they have treated Vets. They certainly have tried to stifle their democratic rights and made sure they weren't looked after adequately. Harper's speech out to have resulted in complaints to the CRTC for lying, while running an ad.

e.a.f. it is disgusting when we have a loser at the helm of this beautiful country Canada? We have some problems we need to work out rid ourselves of the cons for good Numero uno dos figure out who is disappearing these aboriginal women? It seems to be a sick epidemic and my humble opinion is the RCMP have lot's to answer for this as female RCMP officers have recently come out and accused their male counterparts as being racist and sexist so the track of evidence leads to these porky the pigs Royal Con Mounting Police. That have Harper's back so no wonder they can get away with this outrage...

You think or am I nuts?

Maher sees nothing good in this:

It’s possible that between October and December, Paulson’s political masters let him know that he should not release the video.

It suits the government to behave as if the RCMP is independent, but Paulson appears to be more like a deputy minister than a police chief.

And Harper wants to portray this attack as an example of why we must be led by him, not Trudeau or Tom Mulcair, who are too soft-headed or weak-willed to protect us from terrorists.

And yet David: Harper is the terrorist incarnate... As well as a schoolyard bully and coward.