The Horror of Harperland and the Arrival of Baby Freedom 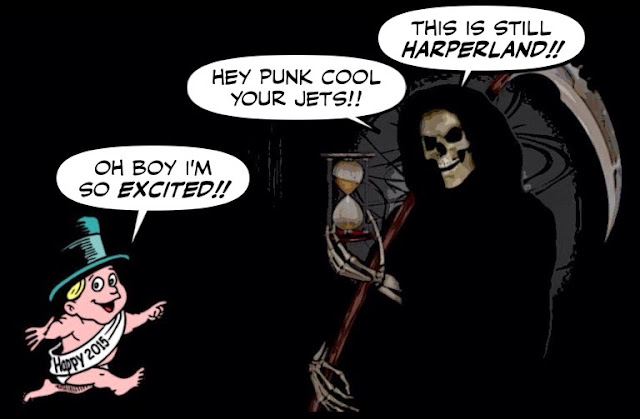 Gawd. I was planning to go through all the posts I wrote this year, and write something about the deathly year of 2014.

So I could warn Baby 2015 what to expect, when he or she comes roaring through the door, with hope in its eyes. Into this dark Harperland, where hope goes to die.

But unfortunately although I thought I had written about 400 posts, which would have been hard enough to even skim through. I actually wrote more than 600.

So I almost immediately gave up.

Because there's a limit to the amount of depressing stuff you can be exposed to at this gloomy time of the year eh?

Without going completely bonkers like so many people in this country.

And besides I would need at least a month to list all of this monstrous leader's imperfections... 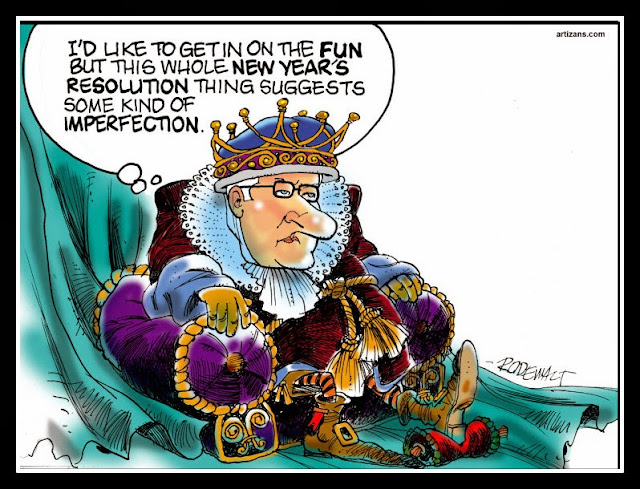 Or all his crimes against Canada.

But then, as if that wasn't depressing enough, there was Michael Den Tandt predicting that Stephen Harper won't call an early election.

Because, wait for it, he's steady and predictable.

My reasoning is simply this: Harper likes to govern, and prides himself on steadiness and predictability. Barring a major unforeseen event, which can always happen, he will be inclined to do what he has said he will do, and govern through the end of this term.

Which threw me into a state of total confusion... 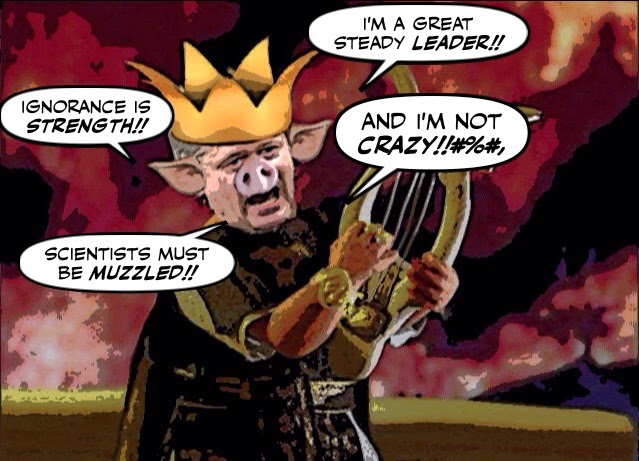 And made me wonder whether that sorry scribbler is talking about the same MANIAC?

But apparently he is, because Den Tandt is also predicting that Harper will win the election. And that the Liberals and the NDP won't topple his minority government. Because they hate each other more than they hate HIM:

When the election does come, the Conservatives will win it, narrowly, with a minority. The Trudeau Liberals will more than double their seat count, from the current 35, and replace the New Democrats as the Official Opposition. But there will be no immediate unseating of the Harper government by a Liberal-NDP coalition, as some have speculated will happen.

The reason is simply that the current crop of New Democrats and Liberals viscerally dislike and mistrust each other, including at the leadership level, in a way the NDP and Tories do not. Given his druthers, Mulcair will be inclined to keep Harper in power, with concessions, rather than allow Trudeau to road-test himself as prime minister.

Which for a brief moment almost caused me to give up. Like so many others in this broken country.

Or prepare to pack my bags and head back to that other country. Where as I told you yesterday, I met a powerful movement last summer with hope in its eyes... 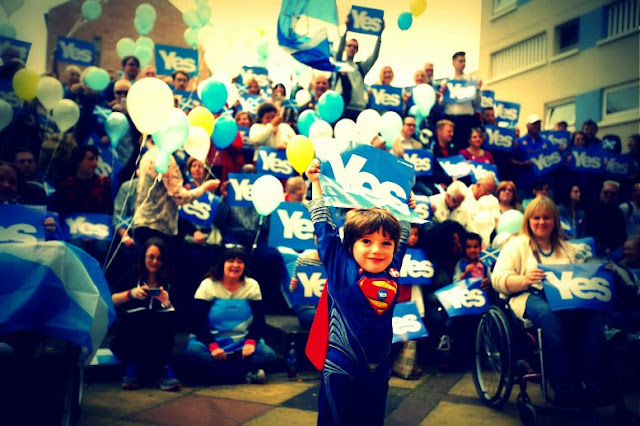 And it was BEAUTIFUL.

But luckily by then I had read enough of what I wrote this year to remember those who are fighting for their freedom and their humanity... 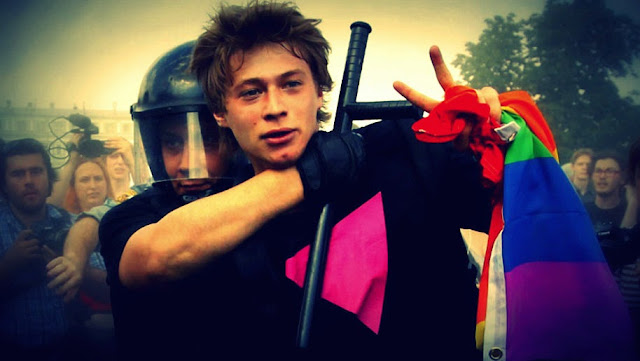 In the face of fascist violence. Brutalized, murdered, and worst of all so easily forgotten.

And I remembered how at the age of thirteen I made the solemn vow to fight the bestial bullies to my death if necessary, in the name of those who didn't survive them.

Which in turn made me remember that this was also the year the great Pete Seeger left us... 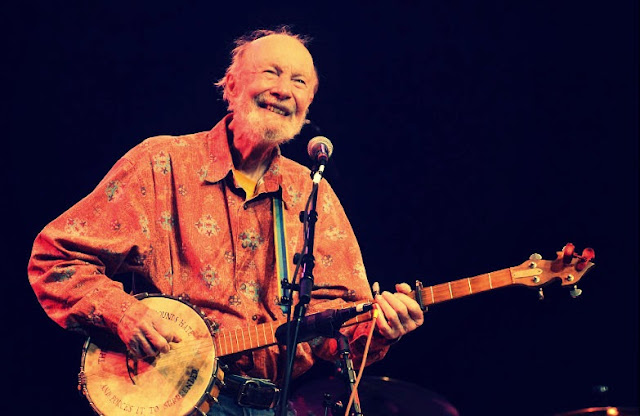 “This banjo surrounds hate and forces it to surrender.”

And how much I loved that old guy and his freedom songs. How much I admired the way he fought all his life to try to create a mighty progressive movement.

And that's when I decided I'm not going anywhere. I'm going to stay right here, and try to help build one in Canada. 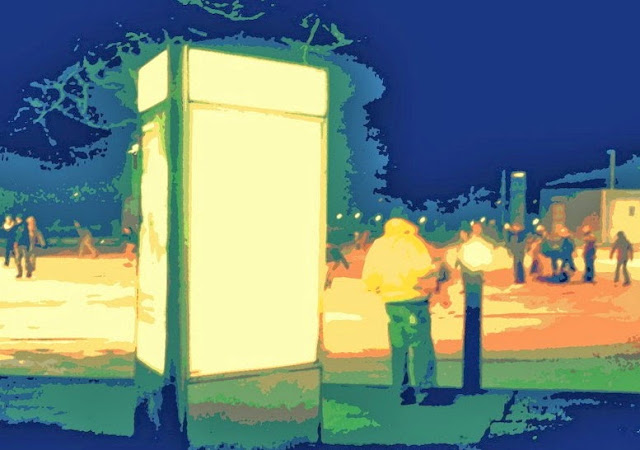 For better or for worse.

Because that's the best thing about a movement. It doesn't just help win elections. It can also keep progressive parties honest AFTER that victory is won.

And force them to do what must be done. i.e. crush the Harper Cons, without hesitation or mercy.

As well as forcing a progressive government to make the radical changes we need, if we are to save this country and the planet.

For I can never forget that once there was a movement in Canada that filled me with the same kind of hope that I felt in Scotland.

It was humble, it wasn't big, it was easily crushed. And even more easily mocked.

And it too was BEAUTIFUL...

And the one we will build to crush the Con regime and its depraved leader, will be the mightiest movement this country has ever seen

Later today I'll write my last post of the year. But for now I just want to say this:

And I think I'll call you FREEDOM...

I am an old woman who has never voted for any party but the CCF and NDP but I don't hate the liberals and I would gladly cooperate with them to get rid of this horrible government. So would most of us social democrats I truly believe.

As for our steady and predictable Dear Leader - I doubt running scared and proroguing parliament was what Den Tandt was talking about.

The only thing that stands between a harper minority gubmint and not is Trudeau. Mulcair has already stated that he would seriously entertain the notion. Trudy has already said he won't do it so harper wins again. Thanks, Justin, from all of us real Canadians who CAN walk past a mirror without stopping to kiss it.
Happy New Year anyway, Simon.
The Scots have their shit together way better than we do, by the way.

Actually, I would have been more worried if den Tandt had predicted that Harper was going to be tossed out in 2015 or that the Libs and NDP would co-operate to turf Dear Leader out.

You see, Simon, den Tandt, according to den Tandt, got almost all of his predictions wrong last year.

Let me predict that if Mulcair keeps Harper in power, as den Tandt predicts, it will be the end of the NDP.

We already saw the NDP Youth angrily denounce Mulcair for supporting Harper and Trudeau's common stand on Israel. You really think they will stand for Mulcair supporting Harper? Besides, den Tandt must have missed Mulcair's recent statement that co-operation with the Liberals is not off the table.

We also saw what happened in the Ontario election when many lifelong and strong NDP supporters/ members angrily denounced Horwath and instead supported the Provincial Liberals. The latter would not have won a majority without capturing many NDP votes. I really do not think Mulcair is that stupid, do you?

Based on den Tandt's track record, it is a no brainer. den Tandt himself would have predicted that he would be mostly wrong again in his predictions this year.

So we can all relax, have a good New Year's Day holiday and keep our hopes high that we will soon see the fall of Dear Closet Leader and his government.

Simon I suggest the English stole the referendum. We can only hope that after repeatedly being caught Harper backs off in 2015. Hope does not cut the grass, voting does, everybody make 2015 a great year and vote.
Happy New Year Simon and all the faithfull readers from coast to coast!

I e-mailed both Mulcair and Trudeau. You two are squabbing like a pair of preteens. Meanwhile, Harper is selling Canada to Communist China. What did you two do about this, not one damned thing. And quite frankly? I don't know why Harper isn't in prison as a traitor, doing acts of treason for selling our country to China?

No replies. The people of this country are on their own, to fight the evil dictator Harper.

hi Anne....I'm to the left of the NDP so I have never been totally satisfied with any election. But I will do whatever I have to in the next election to make sure that a progressive candidate is elected in my riding. As long as enough of them are elected, the Cons will be evicted from power. And after the horror of the last nine years, that's all that counts for me...

hi UU4077 ...thank you and Happy New Year to you and yours !!! And yes that steady and predictable description almost knocked me off my chair. My madness is described as reasonable, we really are in trouble...

hi anon...I don't think Mulcair or Trudeau would be able to resist the call to work together to defeat the Harper Cons. Because it would be loud and angry. As for the Scots, they do seem to have their shit together, but we're a younger country so we just need a little more time. ;)
And thank you, Happy New Year to you and yours !!!

hi anon...yes I wanted to point that out, but ran out of space. Den Tandt is about as good a fortune teller as Margaret Wente. And of course you're right Mulcair could not even consider keeping the Cons in power, he'd have a revolt on his hands. And so would Trudeau if he tried the same thing. Things might look a little complicated now, but they will become clearer as the election draws closer...

hi Steve...well since my Mum's English, which makes me half English I dare not go there. ;) And you're right the big thing is to get out the vote in this country. But hope is important. The lack of it can discourage people from voting. So we need to keep our spirits up and fight the Cons harder than ever. Happy New Year !!!!

hi anon...yes, the Liberals and the NDP need to stop fighting each other. They can only hurt themselves and help Harper by doing that. But I'm confident the New Year bring and end to that, and both can concentrate on fighting the REAL enemy....