Stephen Harper and the Movement That Could Destroy Him 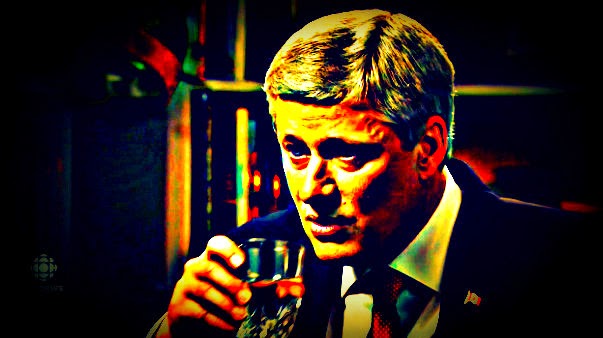 Well he hasn't been seen in public for several days, since his scary year-end TV interview,  where not even four coats of pancake make-up could conceal the crazed look in his eyes.

Especially when he was asked about his terrifying ordeal in that closet.

Since then we've only seen him on that Paul Calandra video, playing Big Daddy, the new/nouveau kinder gentler leader of Harperland... 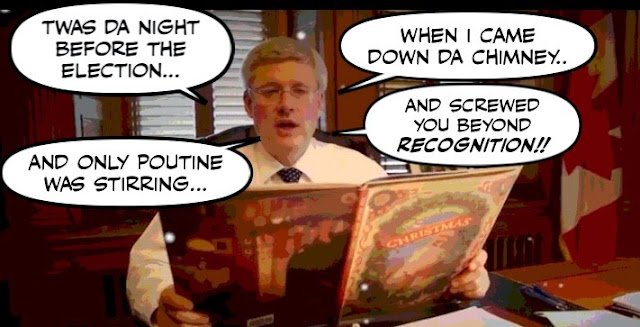 And that he isn't lunging for another majority, like a trout goes after a fly, or a piranha goes after a human leg, because he wants to cling to power.

But only because Canada needs HIM, to change it beyond recognition.

Which must have had the original Big Brother gasping with shock... 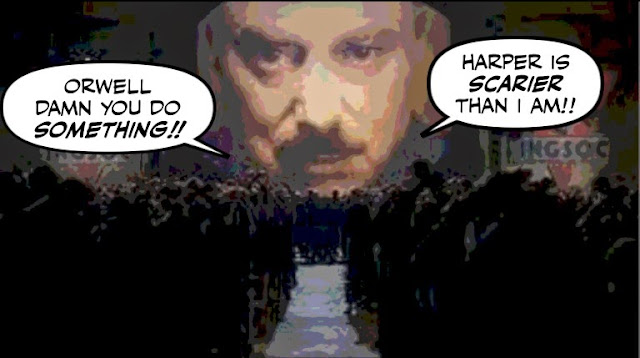 Because only Harper could be that shameless.

But left me roaring with laughter, because what it tells me is that he must be really DESPERATE.

Even after almost a billion dollars of porky propaganda he still can't make enough Canadians LOVE him. 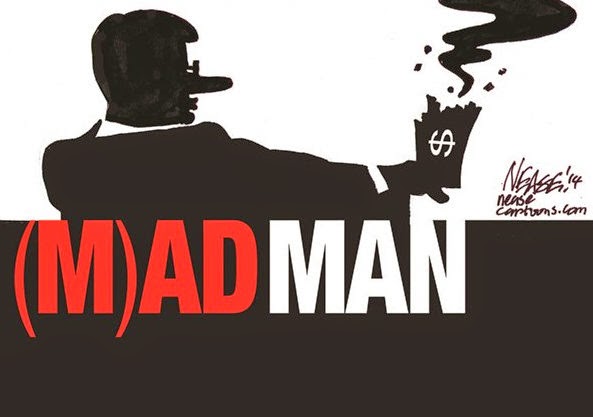 Or stop many others from wondering whether he's crazy and/or dangerous.

And how soon can they get rid of him? Because they can't stand the sight of him anymore.

Which as Jeffrey Simpson points out is what usually happens to Canadian Prime Ministers who don't get the hint that they're good to go.

The most powerful anti-government sentiment in any democracy is the oldest adage in politics: “Time for a change.” The economy can be reasonably sound, the political alternative untried, even shaky, the government experienced and able, but when the largest parts of the public settle on the ill-defined but powerful notion that the time has come to change, there isn’t much the incumbents can do.

So not only do we have the winds of history in our sails, and all the ammunition we need... 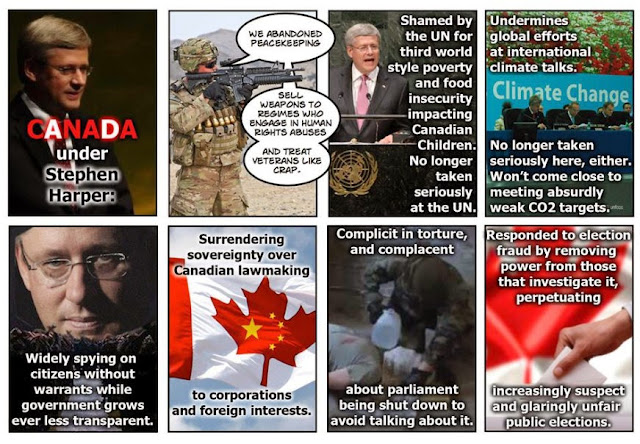 And more scandals than we can use to smear him and his Cons beyond recognition.

We also have most of the good and decent Canadians on our side.

Who are more motivated than ever to defeat him and take their country back... 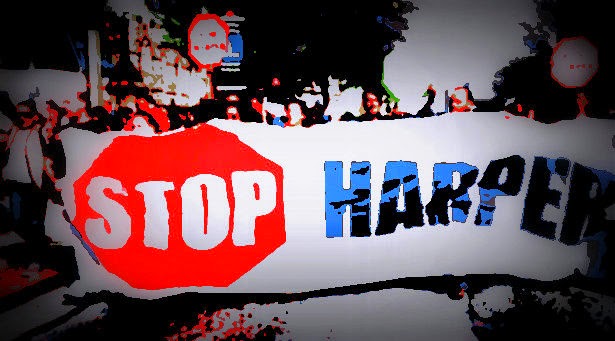 And all we need to turn that energy into an unstoppable movement is a bigger vision, as Robin Sears argues here.

If any of the leaders believes 24 Sussex is secure merely by delivering a small-ball, low-risk campaign they will be disappointed. Canadians are increasingly in a mood for change. We have endured a debilitating economic recession and a decade of hard-edged Conservative government whose legacy is division and little more.

More than three out of five Canadians have never voted for Harper, and few of them will be easily moved to do so the fourth time out. But we will reward the leader and party that deliver a vision of a new and different Canada most powerfully. If his opponents do not, ironically, that could be Stephen Harper.

Because it should be a movement. The next election will not be a mere electoral contest, it will be a mighty battle for the soul of this country, and its very survival.

Movements can move people more than parties can, and the more they are moved, the more people will turn out to vote, which would be the final nail in the Con coffin.

And the end of Stephen Harper... 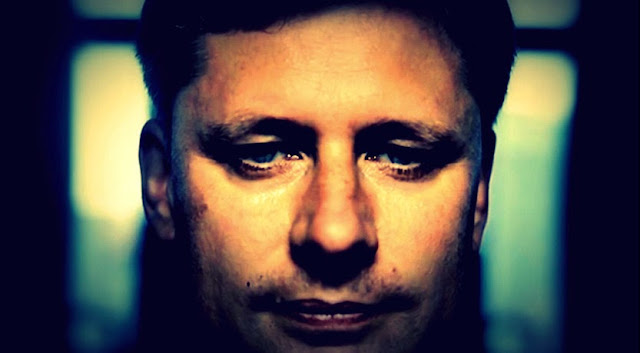 The creepy psycho thug who stole our country.

Well here's one of them, the Council of Canadians wrapping up a year of fighting for OUR Canada.

And wishing us a Happy Harperless New Year...

You see, I told you, the good people of Canada are on our side.

Which is why, although I have been criticized by some for being a bit too cheerful for this time of the year, in this morose Harperland.

I meant what I said in my last post. 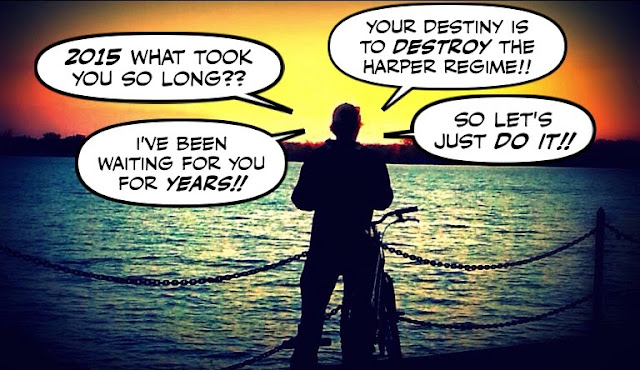 Thank you for the"shout out to the Council of Canadians! Join your local chapter and help us get out the vote!

I still think Harper will drop the writ in Feb. for a March 2015 election.

Before oil prices drop much further, and before the Duffy trial begins (April).

Mansbridge: Year-end interviews people look at very closely for exactly what the prime minister of the day says, especially so in a year before an election is scheduled. So let me get a couple of those kind of questions out of the way quickly. October 19th, should we assume that is when the election will be or is there anything that could change that?

Harper: ***Well, I wouldn’t say there’s nothing that could change it*** but there’s nothing on the horizon that I see changing that. We fixed that date and we’re planning on it like everybody else.

Mansbridge: So when people talk about, oh he’s going go in the spring, we should ignore that?

Harper: Yeah, you should and I always note that it’s, it’s either divining my mind or the comments of some anonymous so-called strategists somewhere whose existence I don’t know of so I have no idea. I can honestly tell you we’ve had no discussion at any level of changing the date so I don’t know where that’s coming from.

hi Mary....Thanks and thank you and the others at the Council of Canadians for standing up for our country and its precious values. You're setting a fine example for all those who believe in Canada....

hi David....yes I noticed that answer, and I don't doubt for a moment that if he thought it convenient, he would break his election law without batting an eyelid. However, don't forget that his cheques, back dated to January, will be landing in mailboxes all over the country in July. So he will be able to say if you like that money vote for me. So I think he will wait until October...