The Main Reason Stephen Harper Hates Kathleen Wynne So Much 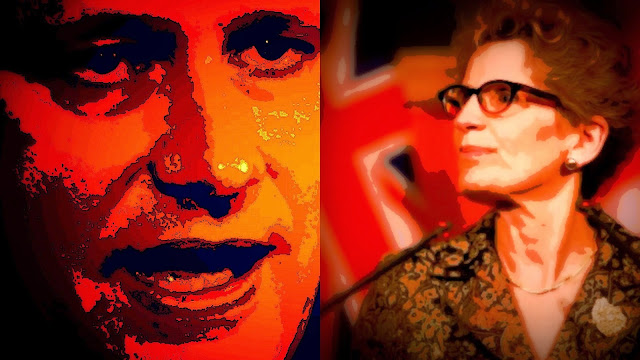 I can only guess why Stephen Harper hates Kathleen Wynne with a passion that makes you want to pick up the phone, and call the police.

Because I'm not a psychiatrist specializing in the treatment of clinical psychopaths, who can't feel the pain of others. Or be rehabilitated.

But I know do enough about him and his morally depraved Con cult to come up with a short list of possible reasons:

(1) He hates her for being a Liberal, the party of Pierre Trudeau he dreams of destroying. And always has, from the moment he stopped worshipping him... 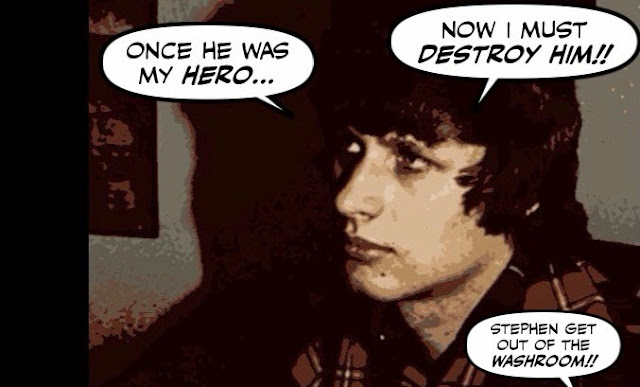 For he has always been a weird bird.

(2) He hates her for being the Premier of Ontario. The province he was born in, but is now trying to KILL.

Because as in the case of Trudeau, he is driven to destroy everything he once loved.

Especially now that those low oil prices are boosting Ontario's fortunes, while him and his Greater Alberta are heading in the opposite direction... 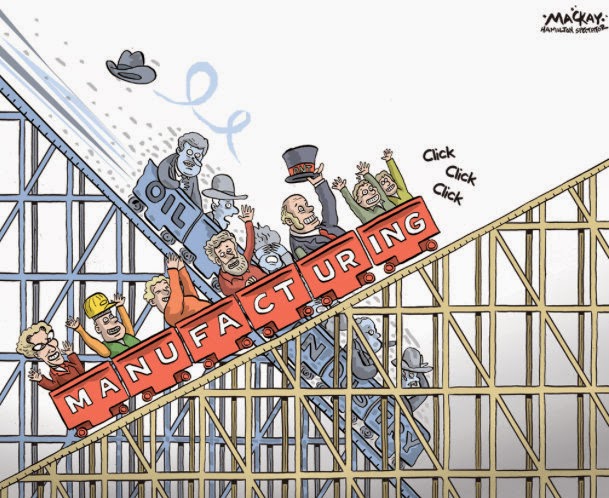 Which must be driving him KRAAAAAAZY.

(3) He hates her because she's a woman, and he has always been a clammy misogynist.

(4) He hates her because she's a lesbian, and he has always been a stealthy bigot.

But I'm pretty sure that the main reason Harper hates Wynne so much is because she once ripped off his mask and revealed his inner monster. 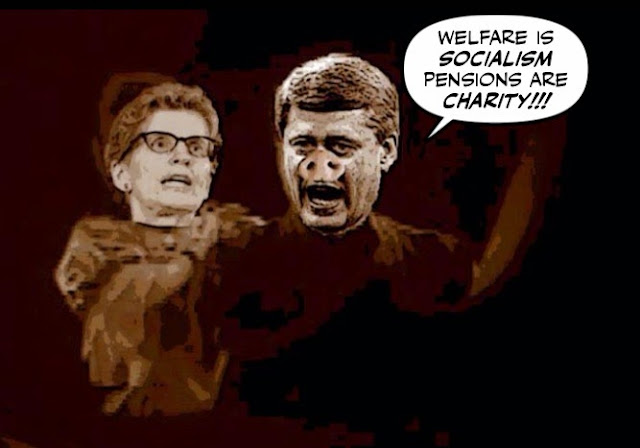 In a 45-minute meeting in Harper’s Centre Block office on Parliament Hill on Dec. 5‎, he apparently said his Conservative government has given people the ability to fend for themselves so there is no need to bolster the Canada Pension Plan.

Revealed him to be under all that propaganda, and all that mascara,  a cold cruel man who would turn this country into a JUNGLE.

A man who would condemn millions of seniors to grinding poverty and indignity. A man capable of stealing the pension of a badly wounded soldier. 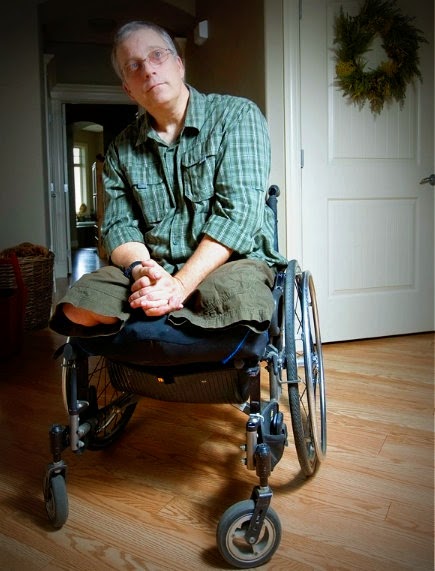 Major Mark Campbell was lying in a hospital bed, just starting to comprehend losing both his legs above the knees in a Taliban ambush, when he found out the federal government had stripped his lifetime military pension.

As he would steal the pensions of ALL Canadians.

And for revealing that inner monster, at a time when Harper is desperately trying to soften his image, Harper can't forgive Wynne... 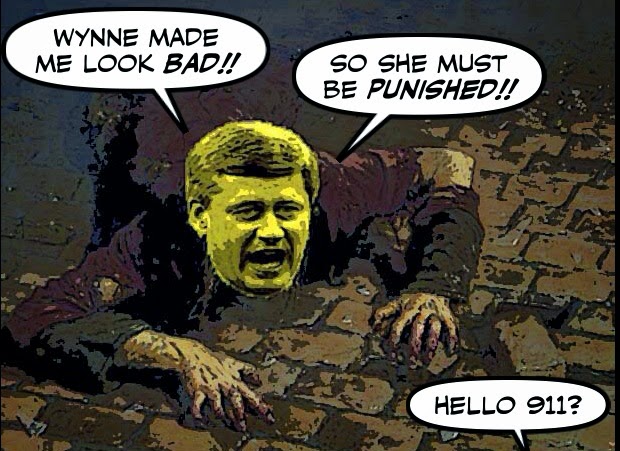 For even he must understand what might happen to his chances of winning the next election, if we are able to portray him as a man who would smirk at the misery of others.

Until Canadians finally understand that his smile is as phony and as evil as the man himself.

That he is crazy, and he is dangerous.

And that you really can't put lipstick on a monstrous Con like this one... 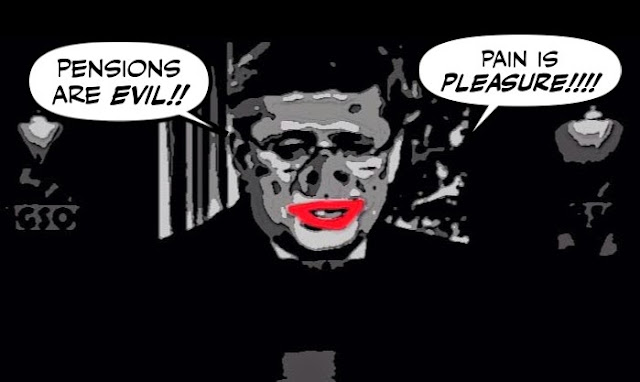 So thank you Kathleen Wynne for exposing his inner beast.

Now sit back and smirk.

While we set out to destroy him...

Harper appears to hate Kathleen Wynne because she's governing in a wildly irresponsible fashion, and she's attempting to extort more money from the Federal Government to finance Ontario. Heck, she campaigned on exactly that.

I'm pretty sure that Harper's reaction is mostly a struggle to come up with ever more creative ways to say no. I'd be holding Wynne in just about as much contempt: she helped her Liberal masters abscond with over 1 billion dollars from the public purse, and aided and abetted the cover-up. And now she wants people from Alberta, and Saskatchewan to prop-up her empire-building? I'm Ontarian, and I think Kathleen Wynne is being morally reprehensible in this matter.

If Wynne had made the slightest effort to govern with a degree of accountability, I'm pretty sure that Harper would have a lot more time for Kathleen Wynne.

But, as is typical for the left, it's obviously got nothing to do with the fact that she's a disturbingly lecherous, underhanded, wildly irresponsible old woman with no ability to consider economic reality.

extort money? Excuse me Ontario puts in about $6 Billion more than it takes out. Its our money, we need it more than Haper needs flunkies.

Not a very deep thinker, are we. Virtually everything you've said is crap.

You're from Ontario, you say! You do like to cut off your nose to spite your face, don't you! If Harper can find the time to meet with NJ Governor Christie then he should find the time to meet with the Premier of Ontario. http://www.theglobeandmail.com/news/politics/new-jersey-governor-chris-christie-to-meet-harper-lay-wreath-at-national-war-memorial/article21966178/

hi anon 7:20...no I'm sorry I disagree. The Harper government was attacking the Liberal government even before Wynne arrived. Have you forgotten how the late Jim Flaherty was always mouthing off? The hostility is entirely ideological, and makes absolutely no sense...

Steve - yes, when you govern in such a way that you actively work to ruin the largest and most crucial economy in the country if the Federal government doesn't cough up the cash, that is a form of extortion.

Simon - You're ignoring the evidence. Sure, there IS ideological opposition, and I don't mean to imply otherwise. But it's ignorant, and utterly wrong-headed to suggest that Harper can't, or won't put those things aside, if and when the other side approaches him as an honest broker. For instance, if Kathleen Wynne wants federal money to develop the Ontario ring of fire, I'm reasonably sure that Harper would be willing to listen to her proposal if it were not for the fact that among other boondoggles, she secretly re-opened the teacher's contract that her predecessor's government imposed on the teachers just a few months prior. http://www.thestar.com/news/queenspark/2014/11/19/liberals_decision_to_reopen_teacher_contract_cost_468m_auditor_says.html

Not even a right-wing news source. Gee, I wonder if Kathleen Wynne just might be taken more seriously if she hadn't gifted people in a declining industry a 1/2 billion dollars.

But no Simon, it's got absolutely nothing to do with that! It's because Harper is a bigot, and a misogynist!

I like Kathleen Wynn and I'm not a Liberal. I think she is a great role model for women. Yes, she wants to meet with harper, but he won't and he may live to regret that. With oil prices and the Canadian $ tanking, manufacturing may pick up in Ontario and Quebec. if those economies pick up, as Canada gets over its "dutch disease" it will be harper who wants to meet with Ms. Wynn. The table will turn.

Wynn is simply doing what she is supposed to do, get the best deal she can for her province. harper is simply afraid of her. She is smarter than he is. It that simply. Its why he won't meet with the other premiers either. The only one dumber than harper is B.C's premier, premier photo op.

Kathleen Wynne leads the most corrupt provincial regime in Canadian history. You could quickly burn out a calculator when adding up the number of scandals that we Ontarian's have had to pay for thanks to the Dullard McGuinty/Katie McWynneguinty tag team. Katie Wynne is not a role model for anyone, except, perhaps, for con-artists and her new age marxist approach to governance will fail, as all the schemes of Karl have failed in the past. Ontariowe is screwed, thanks to the Lieberals, and if I was running the show in Ottawa, I would be extremely hesitant to give any funds to what amounts to a criminal cabal. As for Wynne getting a deal for her province, that is a crock. Katie Wynne only cares about filling the pockets of her friends and Liberal cronies.

Everyone hayes Kathleen Wynne. The PM is just one of many.

How about Wynn/McGinty government robbed Ontario farmers of their retirement. Oh yeah, farmers, who cares about them, right?