Stephen Harper and the Jihadi From Hell or Ottawa 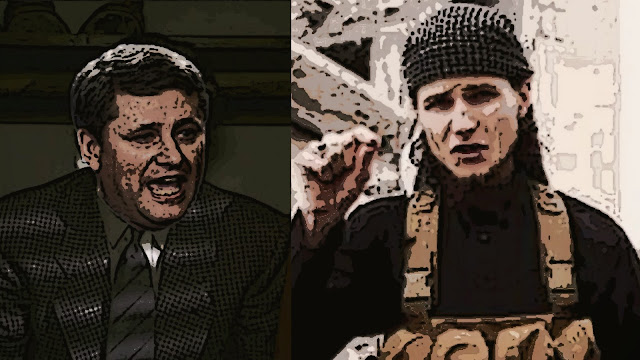 When I first heard the news that another Canadian jihadi had surfaced on YouTube, and was making wild threats against us, at first I was naturally terrified.

Could Great Closet Leader really have found another warrior wannabe like himself, to scare the cowardly into voting for his foul Con regime?

And try to justify turning us into a police state.

But then I saw it was only this loser. 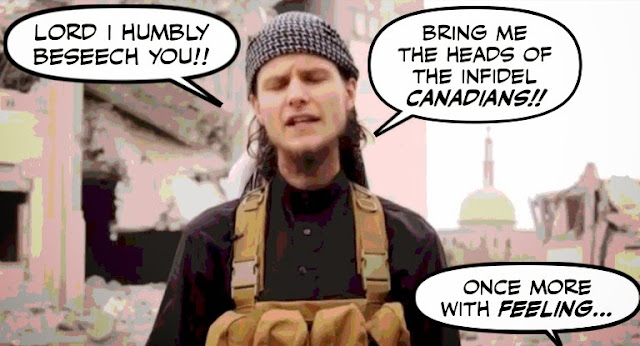 A purported new Islamic State propaganda video features a Canadian man who threatens violence and “punishment” against Canadians on their own soil.

The man identifies himself as Abu Anwar al-Canadi, but his real name is John Maguire. He studied at the University of Ottawa before “falling off the map” about two years ago, according to one fellow student.

And before he caused mass panic in Chickenville, I thought I better send him a message:

Look, I don't blame you for leaving Ottawa, most people under thirty feel the same way about that village. And it's definitely not a place that appreciates wannabe jihadis or wannabe poets...

Only psychiatrists enjoy that kind of stuff eh?

And please don't put yourself down...

Because I think you look FABULOUS in a dress... 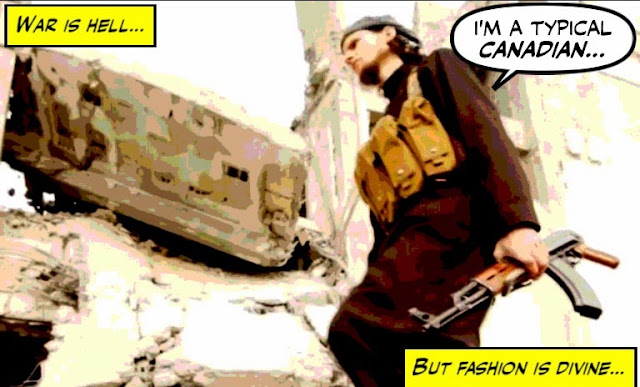 But forget about scaring me, or most non-Con Canadians, because it's just not going to work. 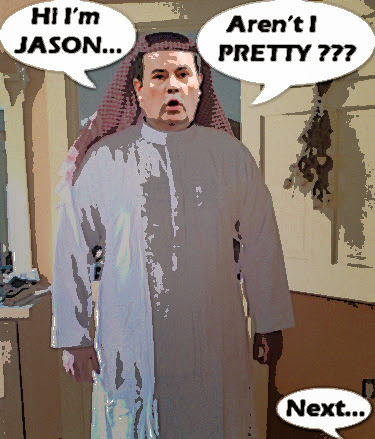 P.S. Could I have your private GPS number so we can stay in touch?

But sadly, before the message could reach Abu Boo Boo, the absurd stooge Steve Blaney came rushing out, seeking to extract  maximum political advantage out of the situation, and desperately trying to spread MASS PANIC. 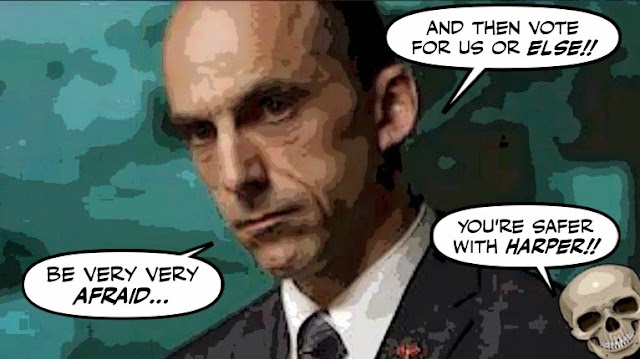 “Terrorism remains a real and serious threat to Canadians, which is why we must remain vigilant,” Blaney said. “That is why we are taking part in the coalition that is currently conducting air strikes against ISIL, and supporting the security forces in Iraq in their fight against this terrorist scourge.”

By trying to convince us that it makes sense to get those wannabe Canadian jihadis AFTER they've committed unspeakable atrocities, rather than BEFORE they leave Ottawa.

Which of course is ridiculous, but it does help explain this strange decision by the usually belligerent John Baird. 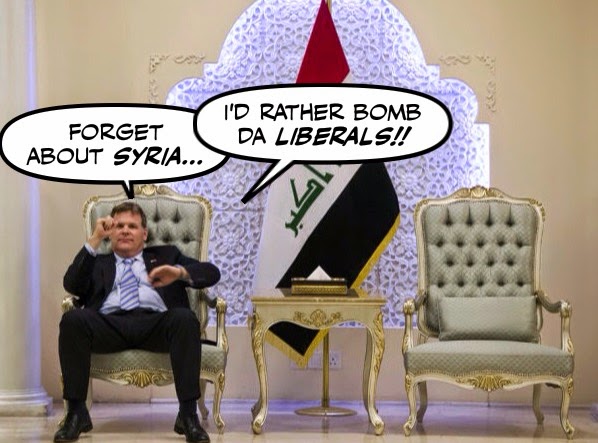 Canada has no plans to follow its neighbour the United States in expanding airstrikes against the Islamic State group into Syria, the country’s top diplomat said Saturday during a visit to the Middle East.

For how could the Cons bomb Syria, and risk hitting Yahya? When they're counting on him and his videos to help them win the next election.

But you know, somehow I don't think it's going to work. The RCMP doesn't dare release the video of the Ottawa shooter.

Lest it reveal him to be more maniac than ISIS terrorist.

And I have a feeling this story is going to end the same way... 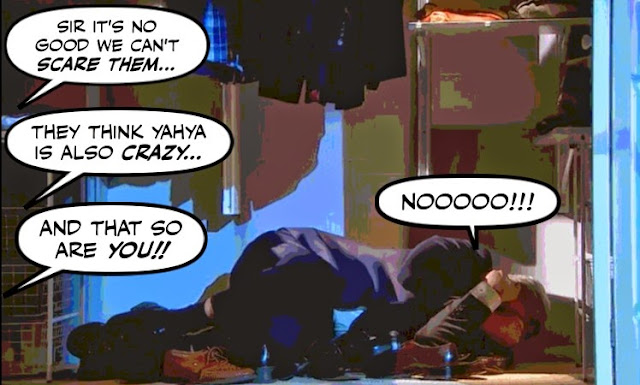 As well it should.

Because we all know who the real threat to Canada is eh?

We have no business conducting a terrorist bombing campaign against any Muslim state...

We have to be so careful. Wonderful segment on Ideas (which I expect to be cancelled anytime now) - WW1 and the Birth of Public Relations. It was on last week. It details how populations have been lead into war by phoney stories and pictures and other underhanded means. Talked about book by Michael Schudson of Columbia University 'Why America Fights: Patriotism and War Propaganda' Should be listened to in every high school in the country. .

I'll wager that he played goalie and played drums in the band. Yep a drumming goalie is generally a messed up individual. I met one once and he was an asshole too

Anne there was no such thing as a 'passport' until WWI either...

“Terrorism remains a real and serious threat to Canadians"

It certainly does; unfortunately the head terrorist threatening Canada is sleazy Steve assisted by his gang of clowns that aren't funny just sad and scary!!!!!

How can anyone with self respect, honor, decency, ethics and morals support an evil entity such as Harper? That beats the hell out of me. Harper is the worst terrorist that Canadians have ever known. A monster so evil as to sell our country to Communist China, with his evil FIPPA deal.

Harper's cabal are useless, spineless, gutless wonders. They fear Harper's screaming rages and his week long depressions, where he is incapable of making any decisions.

Harper lied about being requested to take a role in this war with ISIS, Obama said, he did nothing of the sort. Harper was not wanted in this war. Harper is a pariah, that no-one wants. Harper forced his way into this war and endangered Canadians to terrorist attacks.

Harper is the most despised and corrupt PM, in the recorded history of this Nation.

MacGuire doesn't scare me. He has had his 15 seconds of fame. Now harper and his cons might be scared. We know what happened last month.

My objection to all of this is the cons took away a Canadian citizen's passport. Now many may think that is o.k. because Mcquire went to the middle east to take up arms against, well really who knows. You need a score card to keep track of all the factions and quite frankly who cares. But to take away a Canadian's passport, regardless of their alleged misdeeds, is in my opinion a very dangerous road to go down. We have seen harper and his cons attack groups before, first the defunded women's groups. we saw what followed. The man ought to be given back his passport before harper and his cons start taking others away.

One person's terrorists is another's freedom fighter. We have seen "terrorist groups" become legitimate governments. We may think Macquire is extreme, but then so is harper and his cons. I'm more concerned about harper and his cons than I am of this young man's beliefs and actions. Right now the young man is in the middle east. harper and his cons, well they are right here in Canada and god knows what they will do next.

oh, right on. stevie and his herd are much scarier than this young man in the middle east.

Does anyone else think this video could well be a 'Harper Government Production'?

My gawd, as a political junkie, six decades of life on earth and the last decade under Harper's reign, I've become such a cynic. That being said, I don't 'buy' this video for a second. It's just a little too slick and convenient to be believable.

An eastern Ontario political (not from the right!) junkie.

A. 12:23 p.m. Do I think its probable? No. Do I think its possible? Yes. Its not being cynical. We have simply seen too much in the past 10 yrs to not think it possible. The harper cons will stop at nothing. We have seen the court cases of Sona and Del maestro. Its part of the "shock doctrine" method of getting people to see things they way the politicians want them to see things.