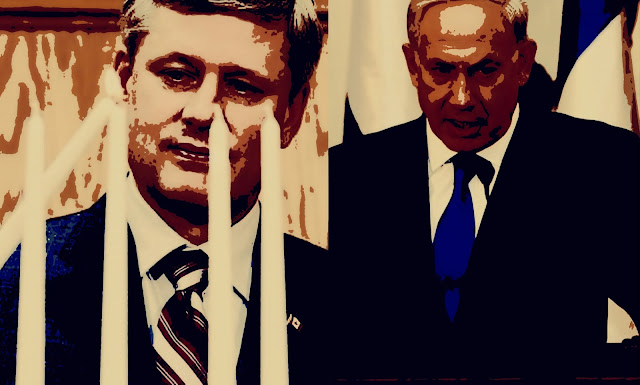 The fuse has been burning ever since Benjamin Netanyahu set out to make Israel the nation-state of the Jewish people.

A controversial bill that officially defines Israel as the nation-state of the Jewish people has been approved by cabinet despite warnings that the move risks undermining the country’s democratic character.

Opponents, including some cabinet ministers, said the new legislation defined reserved “national rights” for Jews only and not for its minorities, and rights groups condemned it as racist.

It's an issue that is bitterly dividing Israelis, and Jews all over the world.

But from Stephen Harper and his Con regime, who like to pose as Israel's best friends ever, there has been only silence. 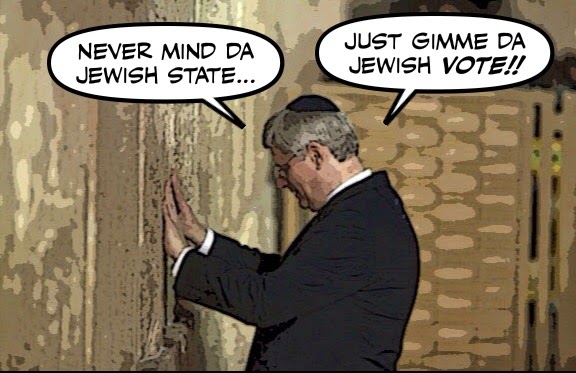 It's a bill that's caused consternation among Israel's closest allies and drawn condemnation from within Israel.

But unlike the U.S. and the European Union, the Harper government has so far declined to criticize it.

"Canada notes the continued debate over the Jewish Nationality bill in keeping with Israel's robust democracy," says Nicholas Doire, spokesman for the Department of Foreign Affairs. "For this reason, it is too early to comment on specific aspects of the bill at this stage."

And for a very simple reason.

Because although most reasonable observers, and real friends of Israel, think Netanyahu's Jewish state plan would deal that country a potentially fatal blow.

It would be a death blow were the national bill to become law, further attenuating the alienation of Arab citizens of Israel from their Jewish counterparts. The bill legitimizes open discrimination. It would further alienate Palestinians in the occupied territories and in the refugee camps who strive for a state of their own. In the broader Arab and Muslim worlds it would additionally confirm the belief that Zionism is racism.

Stephen Harper is caught between at least two rocks and a hard place. 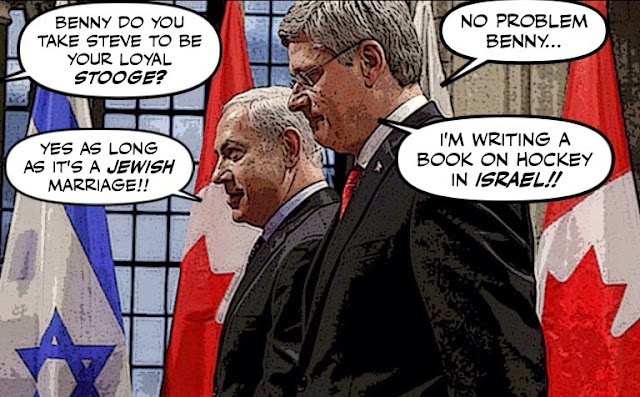 His equally embarrassing attempts to portray himself as more Jewish than most Jews, and Israel as a "righteous" nation... 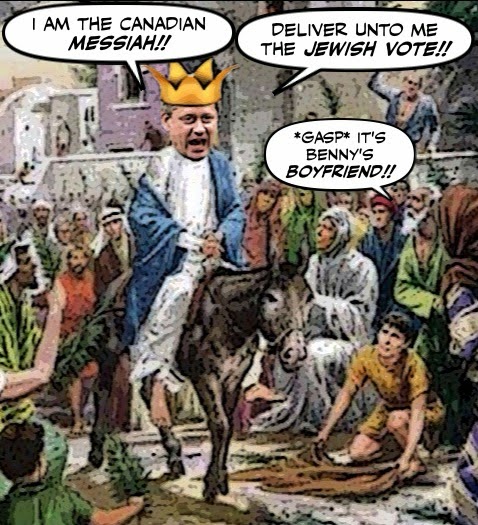 And his rabid Christianist base, who while they portray themselves as Israel's friends see that country more as Jesusland.

The place where after the Battle of Armageddon (with the godless Russians and the Mooslims) their Messiah will land to raise them up to "Heaven." 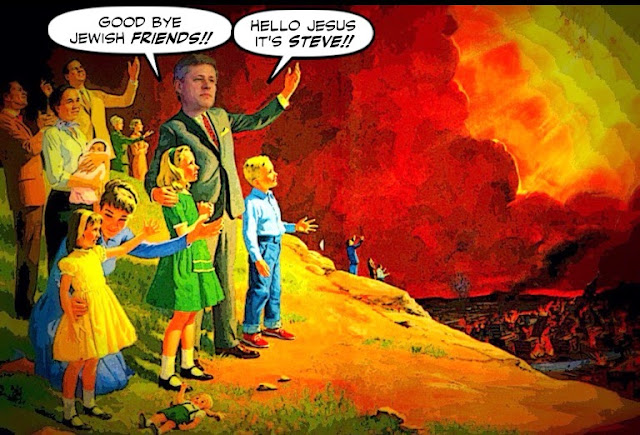 While leaving the Jews and the rest of us heathens behind.

So Harper has to step lightly so as to not offend that rabid base, or inflame Jason Kenney into believing that Great Reform Leader is betraying them... 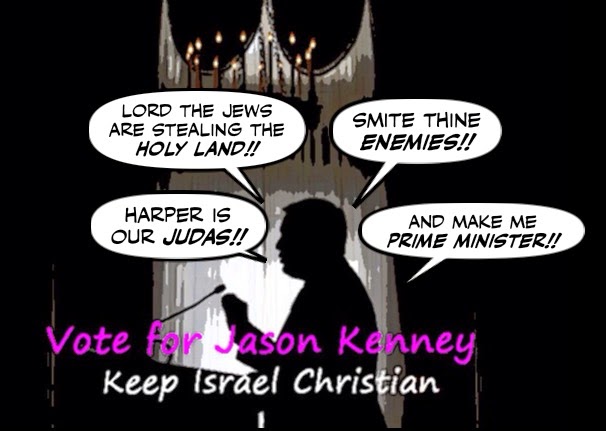 Because you can be sure he's as inflamed as the proverbial burning bush.

And since Netanyahu will almost certainly be seeking Harper's endorsement during the Israeli election campaign, it could place his beloved boyfriend in a very delicate position... 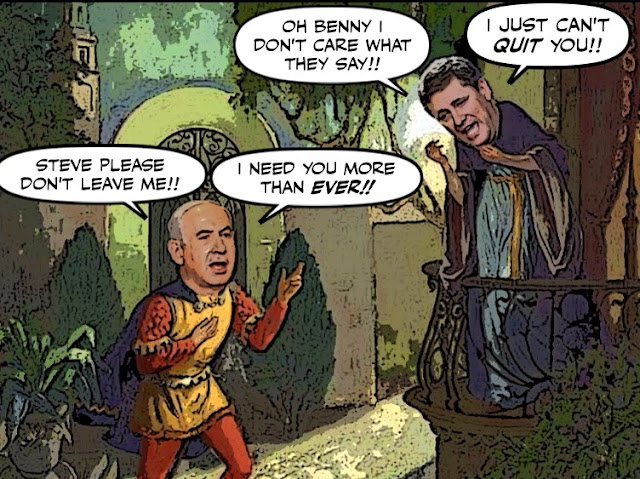 And who knows what crazy things he might say eh?

And since whatever he says is bound to alienate some of his supporters we can't lose.

Great Messiah Leader led his Con cult to the Promised Land in search of the Jewish vote... 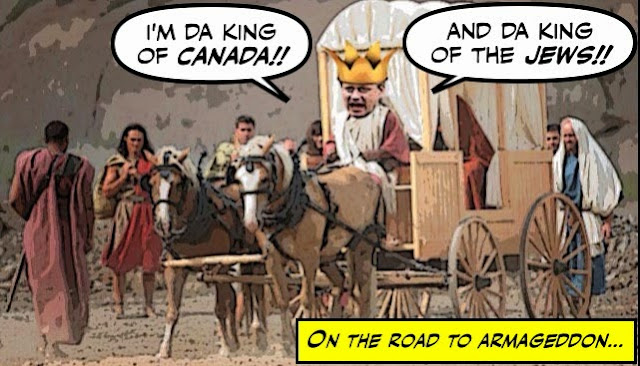 And it did help consume him...

There are many fuses burning on this great Ball of Mud and will be interesting to see which one explodes first!

Love your cartoon above.

No surprise here..if Benny Yahoo gets away with it, what's to stop Emperor Steve from declaring Canada a 'Christian" nation...oh, wait..what about his Jewish supporters here, most of them far more democratically inclined than Benny would ever admit to...
I wrote about this issue when it first came up..frankly, the way the West sucks up to Israeli rightwingers, I'm surprised anyone criticizes the bill...I'll bet those redneck hillbillies in the Southern States are licking their lips at the prospect...

A country can be wither a theocracy or a democracy, it can't be both!

This is not what the founders of the State of Israel had intended. But then the rabid ones do sometimes come to the surface you have Bennie and stevie's time. Harper will not condem Israel, because he would like to do something similar in Canada, i.e. Canada is a Christian country. He and his government have very deliberately taken in only a very few Syrian refugees, while the Scandanavian countries have taken in 30 thousand.

There was a petition going around the world, calling for Netanyahu to be charged with war crimes and crimes against humanity. Many wanted Harper to be tried as well. Harper encouraged Netanyahu to make war on Palestine. Not forgetting the plane load of people, Harper took with him to Israel. Harper even had a rally in Canada supporting Israel.

Harper has always been an embarrassment to Canada and the citizens.

hi anon....I had no idea hoo hoo meant that, I thought I had invented a word. But I changed the picture anyway...;)

Darn, me and my big mouth. I should not have pointed that out. Then Simon would not have changed the cartoon. I have learnt my lesson: be forewarned that you, Simon, will not get such benefit from me in future. :)

BTW, the only reason I had googled that was because I had given my grandchild a toy flute. Of course the only sound she could make on it was "hoo hoo" and, of course, that was what she called it: my hoo hoo. Someone found that funny and said that was what it meant. Your cartoon this morning reminded me to confirm if this was correct (it was, as you can see).

If you turn that photo of Harper at the Wailing Wall a different way, it looks like Harper is doing push-ups!

"Jeremy. Jeremy! Can I get in?" Adler reportedly asked.

After he was shot down by Hunt, Adler replied: "It's the re-election! This is the million-dollar shot."

*
News from the future... One week before the 2015 federal election, York Centre MP Mark Adler remarks: "What happened to the million-dollar shot? He wasn't doing push-ups!" after seeing the photo of Harper at the Western Wall accidentally printed the wrong way in a campaign ad sponsored by the Jewish National Fund of Toronto.

Here's a wild thought.... why can't the Harpercons be both pro-Israel AND pro-Palestinian?

Jesus, Jew, Mohammed, it's true
All sons of Abraham

hi Kathleen...yes I like to think of as a minefield, where sooner or later he is going to step on one...

hi anon... I love that story about your grandchild. But hey, I need all the help I can get too. ;) And I do try to avoid vulgarity however inadvertent. So thanks again...

hi mizdarlin....yes it is a really interesting story, and I'm surprised the MSM hasn't written more about it. But then maybe I shouldn't be surprised because in their coverage of all things Israel there is always a double standard. However, Netanyahu really is taking his country in a potentially catastrophic direction, and sooner or later Stephen Harper is going to be forced to say something, and it could be quite damaging...

hi kootcoot...I couldn't agree more, but somehow in this country Stephen Harper manages to get away with it. I suspect we shall only find out how sinister is this theocratic conspiracy when the Cons are finally defeated and we can put them all on trial....

hi e.a.f...you're absolutely right. As many Israelis have pointed out it violates the country's founding principles. And yes, Netanyahu has surrendered to the right-wing religious fanatics, and unless he is removed from office in the upcoming election he will end up turning Israel into a Jewish version of Iran...

hi anon...I haven't the slightest hesitation in calling Netanyahu a war criminal for his monstrous assault on Gaza, He's bad for the Palestinians, he's bad for the Israelis, and he can't be removed from office soon enough. Which as you probably know is exactly how I feel about Stephen Harper...

hi David....thanks for that photo idea, it really is hilarious, and you can be sure I will find some occasion to use it some day. And as for the Palestine question, I am pro-Palestinian and pro-Israel, since it's the only position that can heal that open wound in the world. But the Cons are rabid ideologues and their leader is insane, so I don't expect anything from them...